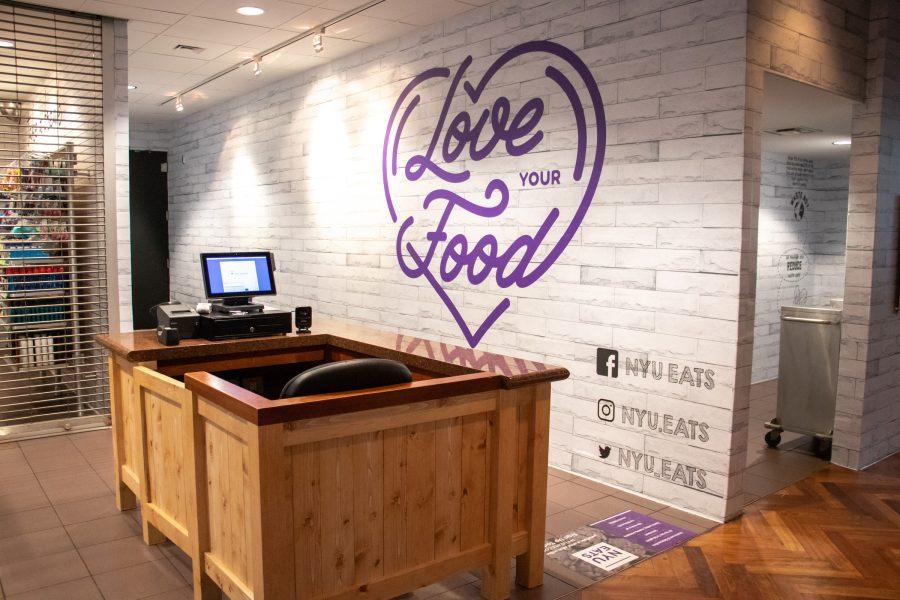 Palladium scored 47 points during the Sept. 24 health inspection — 21 over what warrants the worst possible grade, a C. At an inspection earlier that month, Palladium received a B grade with 24 points. The presence of filth flies and improperly refrigerated food were the main issues with the facility, according to the New York City Department of Health and Mental Hygiene.

This was less than a month into Chartwells’ term as NYU’s new dining service provider. Aramark — NYU’s provider for 43 years — was replaced by Chartwells partially because of a failed health inspection that occurred at Lipton Dining Hall in 2017. During its last year as NYU’s provider, Aramark was paid $50 million for its contract.

Gallatin first-year Lux Blum said he went to Palladium often because it is close to Founders Residence Hall, where he lives.

“I think it’s pretty disgusting,” Blum said. “We’re paying God knows how much for this meal plan that is forced on us because we can’t even choose to not have a meal plan as [first-years] and then not even being able to go to this dining hall and have safe and healthy food.”

SPS sophomore and President of SPS Student Council Kody Christiansen said he was frustrated because of NYU’s recent switch to Chartwells for supposedly better service.

“We spent all that money [and] we are moving over to a new provider. Shouldn’t NYU have checked a little further into their track record?’’ Christiansen said. “I’m invited to a Board of Trustees lunch and we will definitely be bringing this up. This is unacceptable.”

In a statement to WSN, Associate Vice President for Campus Services Owen Moore said the university was disappointed in Chartwells’ performance.

“The news that Palladium Hall recently received a ‘C’ rating in an inspection by the NYC Department of Health was extremely disappointing, particularly because we are only a few months into our partnership,” Moore said. “We’ve made it abundantly clear to our colleagues at Chartwells that this is at odds with our expectations and we will be closely monitoring the situation to ensure these violations are addressed swiftly and permanently.”

In a letter to students, Chartwells, on the other hand, said that they had been trying to resolve the issue for some time. WSN received the letter through an NYU spokesperson.

“We have been aggressively grappling with this issue since we took over operations of the Palladium dining hall,” the letter states.

The letter lists visits from pest control specialists, deep cleanings and third-party audit inspections as past efforts by Chartwells to solve the problem. Now, the company has hired an independent entomologist and is further training their staff to deal with it.

Dining staff themselves told WSN they, like students, were frustrated with the news — but for different reasons.

“The grade was unfairly based off of a single issue which made us fail the entire inspection,” a staff member said on condition of anonymity, due to fear of retaliation by Chartwells. “We have no control over any of this.”

Another employee emphasized that the flies were an issue that could not be avoided.

“In reality, everything that’s written is an exaggeration,” the employee said. “It’s hard to get rid of [flies] because there’s always a bunch of open food.”

Multiple employees said they have noticed a slow down in the amount of students they serve and worried that this might affect their employment.

“Our job depends on students coming and getting food,” one staff member said. “This is not fair for us.”

Still, students feel justified in their decision not to eat at Palladium. Tisch first-year Cole Swanson was disappointed by the inspection results, having been one of many who attend Palladium’s Sunday brunches, the line for which often extends as far as the building’s lobby two floors below.

“Palladium brunch is outstanding and a genius idea, but now it’s completely ruined for me,” Swanson said. “Unfortunately, I will not go back to Palladium until there is evidence of it not being disgusting.”

Tisch sophomore Derek Mulltines has to return to Palladium because he lives there — a decision he regrets.

“There should be reimbursement towards Palladium residents,” Mulltines said. “I picked Palladium because of the dining hall, which is now not trustworthy. I feel cheated.”

Tisch junior Nancy Kimball said, putting aside the potential health concerns, she was also frustrated that NYU did not send out a school-wide notification about the issue.

“Can I just say, we haven’t really been communicated with about what the violations are,” Kimball said. “I just know that it failed because I saw it on Instagram.”

LS first-year Aliana Whelan said that Lipton’s past failure points to a more systemic problem within the university.

“NYU has dealt with this before, which is why they changed providers,” Whelan said. “Is it the provider itself or the way NYU dining works? They just sound like they don’t care.”

A version of this article appeared in the Monday, October 7, 2019 print edition. Email Lisa Cochran and Mina Mohammadi at [email protected]