The names were placed on Kimmel’s stairs to thank seniors who donated to the 1831 fund. After complaints by transgender students, the university has offered to replace the names of any affected seniors. 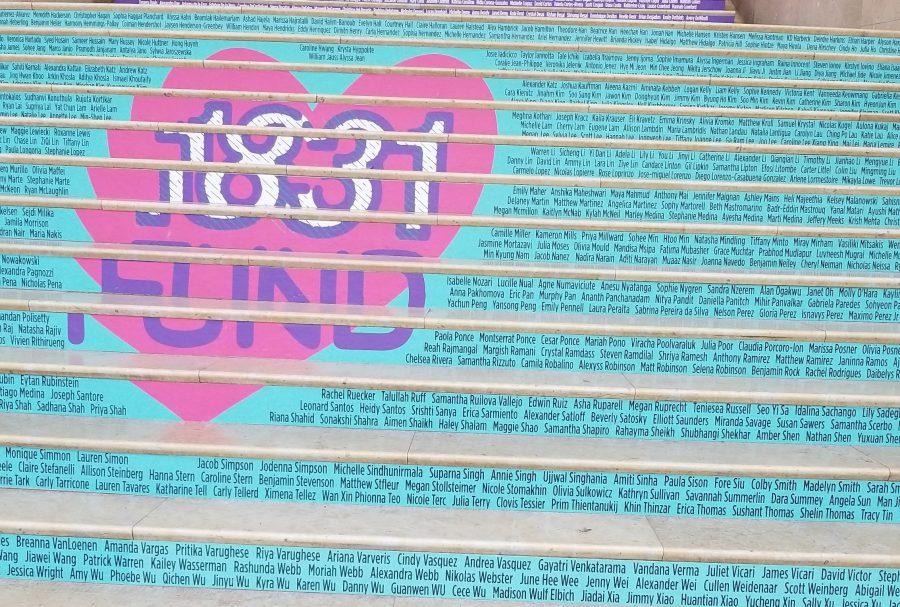 Seniors' names on the steps of the Kimmel Center for University Life. (Photo by Akshay Prabhushankar)

After an effort to recognize seniors who donated to the 1831 Fund by placing their names on the stairs of the Kimmel Center for University Life, some transgender students and allies were angered since their legal names were used instead of their preferred ones.

In a tweet, Senator at-Large and Gallatin junior Victor Markhoff said that some transgender students were deadnamed — the legal names that these students no longer associate with were plastered onto the stairs.

“These names were legal and have publicly deadnamed many trans students, which is not only humiliating but a real safety risk,” Markhoff said in a tweet. “Shame to a university that prides itself on LGBTQ Rights, and on [the 50th Anniversary of the Stonewall Riots] of all years.”

Two people have already come forward to the university requesting that their legal names be changed to their preferred names, according to university spokesperson John Beckman.

“We are taking steps to replace the names currently posted with the preferred names,” Beckman said in a statement to WSN.

The initiative was organized in conjunction with the 2019 Class Activities Board. In an email to WSN, CAB19 president and Tandon senior Claire Liu said that the group tracked students who contributed to the 1831 fund through their net IDs. The identifiers gave CAB19 and the 1831 Fund names and emails that appear on Albert, and those names do not necessarily reflect the student’s identity. Liu added that students who donated before the deadline had the option to opt out of having their name on the stairs and were asked questions about the initiative.

Liu apologized for the frustrations the initiative may have caused for transgender students.

“I do understand how frustrating it must be for senior trans-students to be misidentified and misrepresented on the stairs, which were intended to show appreciation for the student donors, not put them at risk,” Liu said in an email to WSN.

Liu attributed the mishandling of transgender students’ names to NYU IT and Albert. Students can change their preferred name in Albert and that name is then used in university business whenever possible. For some students, this poses a problem due to the fact that their parents may see the preferred name in mail or messages sent home, potentially outing them as transgender. Students who are not out to their parents may not wish to input a preferred name, even if they do not want their legal name to be referenced by friends or, say, the Kimmel steps.

So far, NYU has not released a feature on Albert that accounts for all gender identities. There have been efforts by members of the Student Government Assembly and NYU’s Queer Union to make Albert more accommodating for non-binary and transgender students by adding more preferred pronouns and gender indentities. Currently, students have the option to switch to the gender they prefer on Albert.