In a complaint filed to the Department of Education, Gallatin senior Adela Cojab alleges that NYU has allowed anti-Semitism to spread on campus. 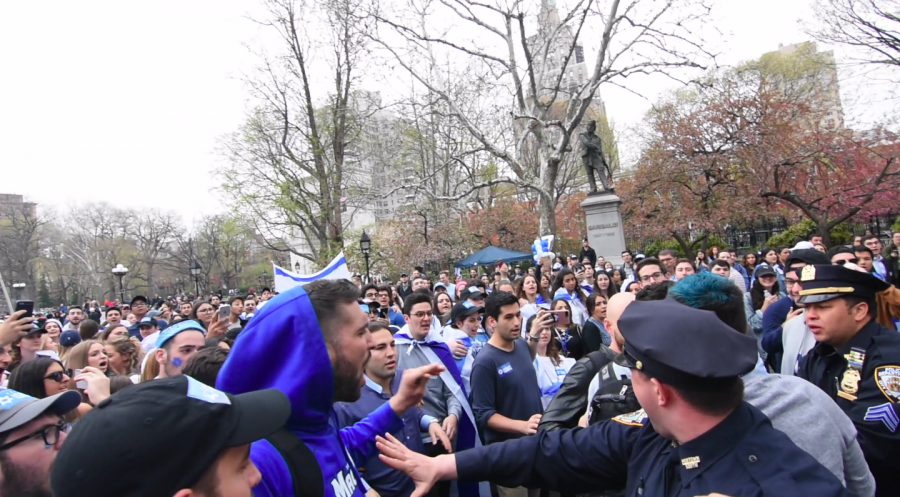 A fight broke out in Washington Square Park during a rave for Israel’s Independence Day in April 2018. Supporters of Israel clashed with pro-Palestine protestors. (Courtesy of Ido Siman Tov)

A complaint filed against NYU to the Department of Education alleging that the university has enabled anti-Semitism on campus has received national attention after articles appeared in publications such as The New York Post and Newsweek.

The former president of the Zionist student group NYU Realize Israel, Adela Cojab, filed the compaint on Monday. The Gallatin senior alleges that student activist groups have alienated and harassed students who support Israel. If the Department of Education finds the allegations to be true, NYU would have the opportunity to resolve the complaint by creating a set of remedial steps to address anti-Semitism on campus. Otherwise, the university could risk losing federal funding.

“The master of campus strife clearly is the [Students for Justice in Palestine]; indeed, the SJP takes pride in fomenting this environment,” the complaint read.

The complaint goes on to say that SJP is a “terror-affiliated anti-Semitic network” and cites instances at NYU that Cojab sees as examples of anti-Semitism and led her to conclude that the club is a hate group.

In April 2018, NYU Realize Israel and TorchPAC hosted a rave in the park for Israel’s Independence Day. Thirty-two Palestinians were killed by Israeli soldiers in the weeks leading up to the rave while protesting in the Gaza Strip. SJP held a rally as a protest against the rave. There, members of Jewish Voice for Peace and SJP burned an Israeli flag, and a protestor grabbed the microphone from a student singing the Israeli national anthem. Another protestor grabbed an Israeli flag from a student. That protestor, as well as one involved in the burning of the Israeli flag, were arrested by the NYPD.

On Twitter, CAS senior Rose Asaf — the president of JVP and a member of SJP — said that the complaint filed by Cojab puts a focus on those advocating for Palestine, rather than those who present what she sees as a more legitimate danger to Jewish people. Asaf referenced the shooting that occurred at a synagogue in Poway, California which killed one person and left three people injured on Saturday. While police have not stated a motive for the shooting, someone claiming to be the perpetrator posted an anti-Semitic letter online to 8chan.

“The Jewish community is under attack by white nationalism [and] fools like [Cojab] are making the conversation about students advocating for Palestinian rights,” Asaf said in a tweet. “All of them should be ashamed.”

Cojab said in an interview with WSN that it is unfair to say her complaint is exaggerating the issue.

“If I would’ve burned a Palestinian flag, and Palestinian students said ‘I feel threatened, I feel scared,’ I would say that makes sense,” Cojab said. “I would not call that into question. It’s a little bit disrespectful to tell students that feel unsafe that they’re overreacting.”

A couple of weeks before the rave, 50 clubs signed a pledge to boycott Israel and academic institutions and conferences supported by it. The pledge included a boycott of pro-Israel clubs Realize Israel and TorchPAC. In October, another pledge urged non-cooperation with NYU Tel Aviv for being “complicit in the state of Israel’s targeted discrimination against activists and Palestinian and Muslim students.” Both SJP and JVP supported the pledges.

The following semester, a resolution in student government proposed by members of SJP was introduced as part of the Boycott, Divestment and Sanctions movement, which protests Israel for its aggression toward Palestine. The complaint lists this resolution and the two pledges as examples of anti-Semitism on campus.

The complaint also mentioned the Bronfman Center shutting down in December over tweets by a student, who is not part of SJP or JVP, that it perceived as threatening to Jewish students.

When SJP received the President’s Service Award earlier this month, Cojab saw it as the university legitimizing anti-Semitism on campus in the complaint.

In a statement to WSN, NYU spokesperson John Beckman said that the university gives the President’s Service Award to over 150 groups on campus and that the charges of anti-Semitism made against the university were baseless, especially considering that Hamilton has previously denounced the BDS movement and the resolution proposed as part of it.

“Anti-Semitism is real; it should be fought,” Beckman said. “But tarring NYU as tolerant of anti-Semitism is wrong and unfair. NYU has a long record of being welcoming and supportive of its Jewish community, and that is not ever going to change.”

Some students believed the university’s statement on the President’s Service Award — as well as NYU President Andrew Hamilton’s absence from the awards ceremony — portrayed the award and their activism as insignificant.

“The university is really downplaying the significance of an award they bestow,” CAS junior Kosar Kosar, who was recently elected to vice chairperson of the Student Senators Council, said in an email to WSN. “This is a slap to the face to the many student leaders [mostly people of color] who have put the hours into making NYU a better place.”

Cojab said she agrees that the university acted unfairly by what she sees as downplaying the awards, but thinks that instead it should have acknowledged that it made a mistake by honoring SJP.

Cojab maintains that the complaint is in response to SJP’s actions, not its ideals.

“My complaint is not about politics or ideology: it’s not about silencing students,” Cojab said. “It’s about the actions that have been taken by students on the ground. Everyone has a right to advocate and I have always supported the right to advocate. But there’s a difference between activism and continuous harassment, and there’s a difference between protest and physical aggression.”

The Department of Education did not respond to a request for comment by the time of publication.

Update, April 29: Kosar Kosar, whose tweet was originally included in this article, reached out in an email to WSN requesting that a statement by him was used instead. This article has been updated with his statement.

A version of this article appeared in the Monday, April 29, 2019, print edition. Additional reporting by Grace Moon. Email Victor Porcelli and Meghna Maharishi at [email protected]