Out, Proud and Graduating: Lavender Graduation 2019

The Lavender Graduation honored graduating LGBTQ students from across the university on Wednesday. 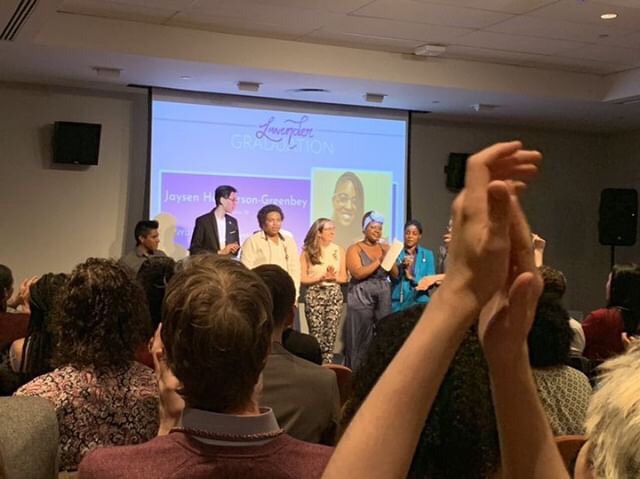 The second annual Lavender Graduation — a ceremony dedicated to graduating LGBTQ students — was held on the 10th floor of the Kimmel Center for University Life on Wednesday.

Director of NYU’s LGBTQ Center Chris Woods opened the event. The ceremony is for all graduating LGBTQ students and celebrates their influence in making NYU a more diverse, accepting and inclusive institution. The event was open to all students ranging from undergraduates to doctoral students.

As an alumna herself, Coleman works closely with the center and has emphasized the importance of efforts to promote inclusion at NYU.

On stage, Coleman — along with Woods and Lukas La Rivière, the center’s program administrator — announced ongoing projects to integrate preferred names and pronouns on Albert and plans to further develop Safe Zone, a program which educates faculty and students about LGBTQ issues to promote queer students’ comfort and safety.

“You haven’t left NYU as you found it, you have left it a better place,” Coleman said, addressing the graduating students. “Your NYU community will keep cheering you on.”

Students who aided the center, promoted growth of various queer-related organizations and showed extensive activism as members of the LGBTQ community were commemorated with awards throughout the evening.

T-Party at NYU President and Steinhardt senior August Enzer, OUT | Breath leader and GSAS student Hannah Leffingwell and NYUAD senior Leslie Gray, who fought for LGBTQ rights and safety across NYU campuses, including Tel-Aviv, Berlin and Abu Dhabi, were awarded as OUTStanding Student Leaders. T-Party serves as a space for transgender students and OUT | Breath is a weekly meditation session that serves LGBTQ students experiencing stress.

“It feels really good to be recognized for the progress we’ve made this year,” Enzer said. “I’m excited to see how T-Party grows from here.”

Before the graduation ceremony, which concluded Lavender Graduation, the evening’s keynote speaker, Raquel Willis, gave a speech in front of the students and faculty. Willis, a transgender woman of color, is the executive editor of “Out” magazine. She is also an author and a member of Echoing Ida, a national black women and nonbinary writers’ collective.

Willis referenced Marsha P. Johnson and Sylvia Rivera, the transgender activists of color who were influential figures in New York City’s LGBTQ community during the Stonewall Riots and transgender activist of color Miss Major Griffin-Gracy, who advocates for transgender people affected by the prison-industrial complex.

As the graduation came to a close, Jamie Remmers and Maurice Shirley, who work for the NYU LGBTQ Alumni Network, called on the students to return and continue their work at NYU.

“You always have a place to come back,” Remmers said.

Other awards were given to: