Students don’t understand why NYU decided to switch to Compass Group for dining services because, like Aramark, Compass Group also has connections to prisons. 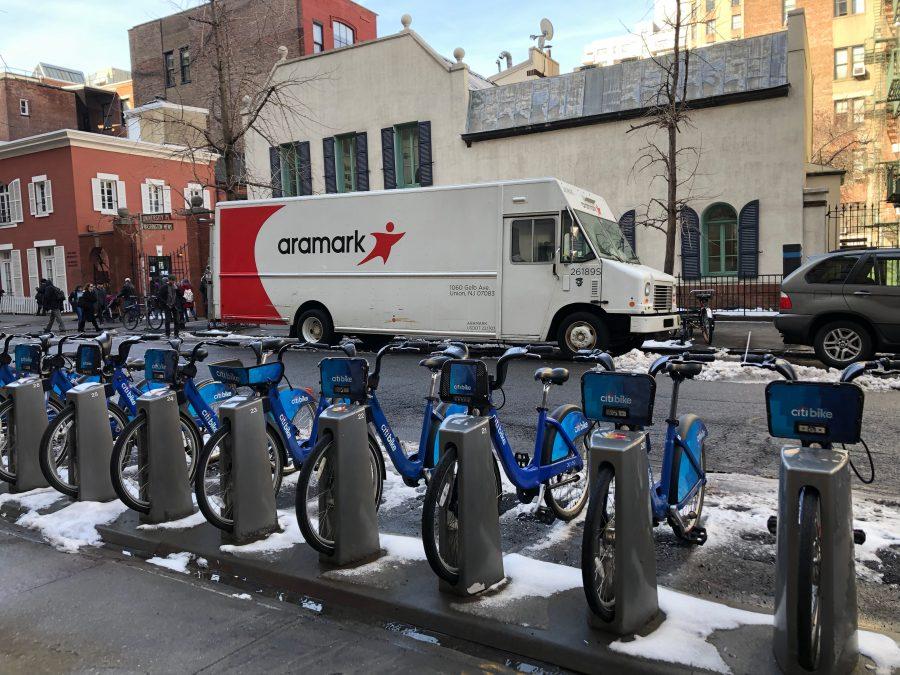 An Aramark truck parked on the NYU campus. NYU will be ending its contract with Aramark. (Photo by Marva Shi)

After months of deliberation, NYU confirmed last week that Aramark will be dropped as the university’s food service provider. The controversial company, which has been on campus for over 40 years and faced several recent scandals, will be replaced by Chartwells, a subsidiary of Compass Group.

Though Aramark’s contract was originally set to expire in 2023, NYU initiated a bidding process in 2017 after Lipton Dining Hall received a C grade from the New York City Department of Health. The new five-year contract with Chartwells will begin in July.

Initially, there were four food service providers considered in the bidding process: Aramark, Compass Group, Sodexo and AVI Foodsystems. Sodexo dropped out in September and AVI dropped out in October.

Student activists have protested both Aramark’s and Compass Group’s ties to private and federal prisons. Activists see involvement in the prison-industrial complex as institutionally racist through the perpetration of mass incarceration. Beyond the companies’ contributions to the prison-industrial complex, the poor service they provide at these facilities has also been levied against them.

In 2014, inmates at a Michigan prison serviced by Aramark reported finding maggots in the potatoes. An inmate at another prison in the state supplied by Aramark claimed in 2016 that he bit into three rocks in his taco, which then caused damage to his teeth. In 2008, prisons in Ontario serviced by a Compass Group subsidiary tested positive for Listeria monocytogenes, which is found in unpasteurized products and can lead to brain and blood infections. Compass Group also provides vending services to prisons in Florida and a subsidiary of the company provides dining services to a prison in Troy, Michigan.

While the university will now cut ties with Aramark, some students do not approve of the university’s decision to negotiate a contract with Compass Group because of their relationship with prisons.

In December, the Incarceration to Education Coalition held a 155-hour-long occupation in the Bobst Library and the Kimmel Center for University Life to protest Aramark and Compass Group, the two companies left in the bidding process.

After the university announced that Compass Group will take over dining operations, the IEC released a statement condemning the new food service provider’s relationship with prisons.

“IEC firmly condemns both Aramark and Compass Group as companies that continue to profit off of the mass criminalization of marginalized communities,” the IEC wrote. “IEC is in no way satisfied by the news of the imminent switch from Aramark to Compass Group.”

Tisch first-year Sam Smith said that he didn’t understand why the university switched food providers when Compass Group also has ties to prisons.

Other students, like Steinhardt first-year Chloe Finder, said that it seemed like the university took student backlash against Aramark into account when switching food service providers.

“From what I do know about the situation, I would count it as a positive because it seems like they have taken some of the students criticisms into account, especially considering that it’s not something — at least in my experience so far — the administration has always done,” Finder said.

Tisch first-year Geneva Heyward said that she was not familiar with Compass Group but hopes NYU didn’t select a provider with the same problems Aramark had.

“I just wonder who they are partnering with now, and I don’t know much about them,” Hayward said. “I hope that they’re not just like, ‘Well, we’re just going to get rid of this bad company and now partner with another bad company.’”

The IEC also emphasized a need for the university to transition to self-operated food services after its five-year contract with Compass Group ends in 2024.

“Our prison divestment campaign has not wavered from the push for self-operative dining,” the IEC wrote. “[W]e will ensure that this switch to Compass Group is only temporary.”

A version of this article appeared in the Monday, April 1, 2019, print edition. Email Meghna Maharishi at [email protected]