Forty-one veterans and spouses of veterans have completed a class designed to help them pursue self-owned businesses. 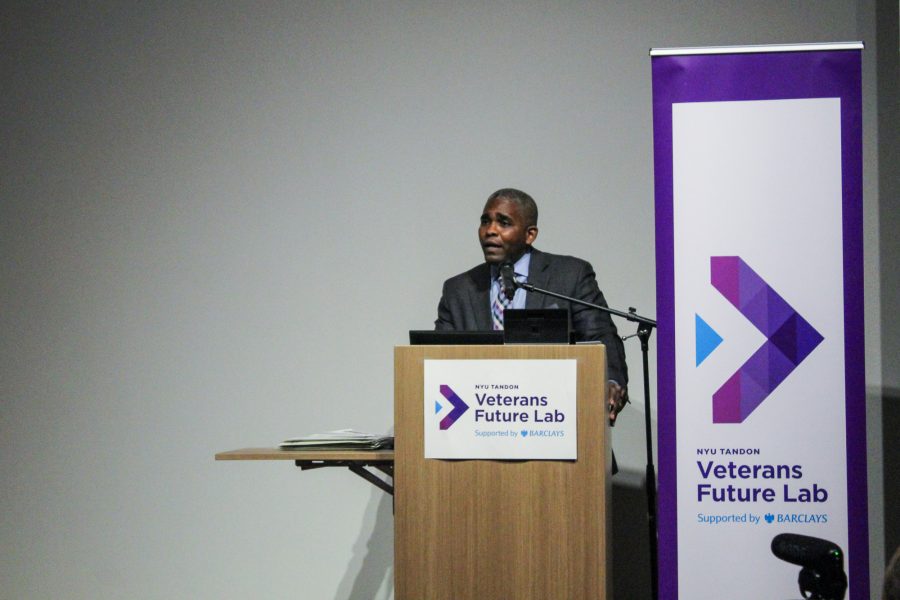 Veterans know how to innovate, how to do a lot with little and how to thrive in difficult situations. Teaching them how to apply this knowledge to entrepreneurship was the goal of a 12-week class under the Tandon School of Engineering’s Veterans Future Lab, from which 41 veterans and spouses of veterans graduated on Wednesday.

Participants of the twelfth Veterans Entrepreneurship Training Program and their families crowded Tandon’s Pfizer Auditorium where multiple speakers offered advice to the graduating class, and three participants pitched their startups. The program is part of the Veterans Future Lab, which offers three different classes focused on ideation, operations and action. The lab also provides access to ProtoShop, a hands-on prototyping space and APEX, a year-long free incubator for companies founded by veterans. Director of the Veterans Future Lab James Hendon spoke first to the graduates of the operations class.

Hendon said that there exists a gap between entrepreneurs who take a more traditional path of high school to college to a startup and veterans who spend time serving.

“We exist to close that gap,” Hendon said.

Amanda Burrill, a graduate of the class, said that she has always felt like an entrepreneurial person, partly because of her ability to adapt to change, a quality she said most veterans have. Burrill said that the VET program taught her how to utilize this skill in business.

“Being able to take this adaptability and feeling of entrepreneurship that I have in life and apply it to how business works now is very valuable,” Burrill said.

Burrill served in the Navy from 2002 to 2010 before becoming a wellness journalist. She is currently working on a startup that uses media to discuss all things recovery and increase awareness about what resources and methods are available. After she served, Burrill was studying for her masters at Columbia University when she tripped and fell down a flight of stairs, which resulted in a moderate traumatic brain injury as well as injuries to her spine, eyes and jaw. Burrill spent a year at NYU’s Rusk Rehabilitation Center working to regain her full speech, vision, balance and cognitive abilities.

“I know from experience that finding the right recovering modalities is not as simple as showing up and saying ‘I need help,’” Burill said. “A lot of times you really have to search for the right help and with an injury like a brain injury, when you cannot articulate things that well, it’s easy to get passed over for things you actually need, you just don’t know you need them.”

Other graduates including Joe Zoleta of Black6Coffee, Deborah Anglin of Beacon Healthcare School Inc. and Christine Noel and Jon-Pierre Kelani of Community Cafe were voted to get the opportunity to pitch their startups at the graduation.

Zoleta uses revenue from his for-profit company to fund his own nonprofit. After taking trips to places such as Puerto Rico to help with disaster relief, Zoleta was running out of money for his projects. Now, he works with coffee farmers in the same areas that he provides disaster relief to produce coffee and sell it for a profit.

Anglin’s nonprofit seeks to educate in-home healthcare providers such as nurses to ensure that those providing care are adequately trained. Noel and Kelani’s Community Cafe is a cafe in Brooklyn committed to premium, locally sourced products.

Among those who spoke at the graduation were keynote speaker President and CEO of Student Veterans of America Jared Lyon and member of the graduating class Lindsey Dixon.

Dixon, who was openly gay in high school, had to become closeted when serving in the Air Force under “Don’t Ask, Don’t Tell.” She said that participating in the program was the first time that she was interacting with members of the military who not only tolerated her and her wife but welcomed them.

“I served under ‘Don’t Ask, Don’t Tell,’ so this is the first time I’ve ever been able to not only legally be allowed to bring my wife, but I know she’s welcome here,” Dixon said.

Dixon said that the program, which required members to pitch their startups and interview potential customers, took a more hands-on approach. Despite referring to the class as a mini-M.B.A., Dixon said the knowledge she valued most was about her classmates.

“My favorite thing I’ve learned is about all of you and all your companies,” Dixon said. “I look around the room and I think about what an amazing impact this room is going to have, or has already had, on this city.”