Hurricane Ida leaves commuter students at the mercy of the elements

On the eve of the first day of classes, the fallout of Hurricane Ida created a public transit nightmare that left students stranded. 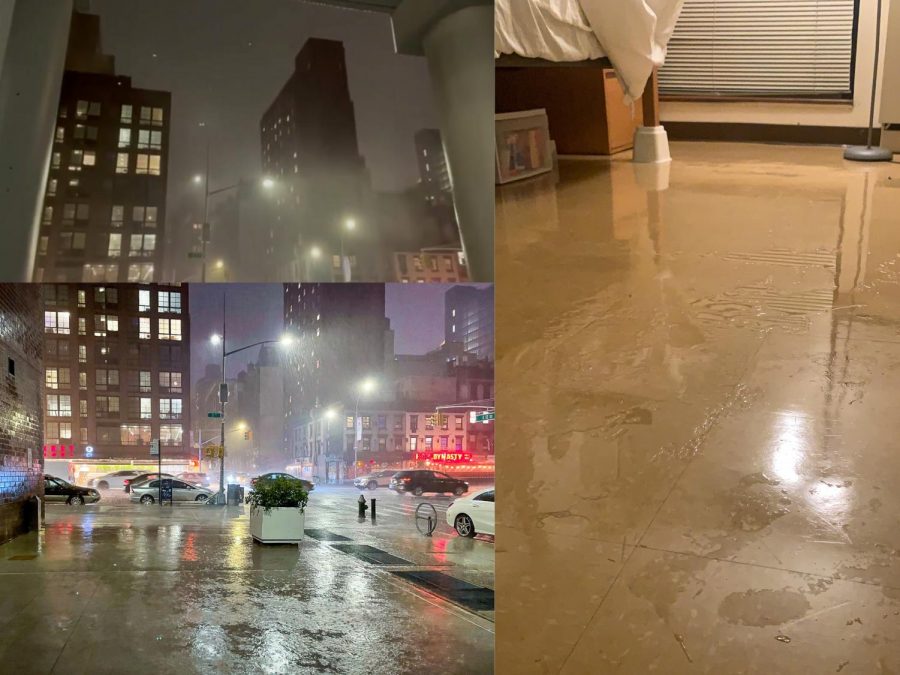 On September 1, a flash flood emergency was declared for New York City from the heavy rains from the remnants of Hurricane Ida. Many NYU commuter students had trouble finding their way back home and to class while relying on public transit. (Staff Photos by Shaina Ahmed and Rachel Cohen)

Even for a cohort of COVID-era students who can’t catch a break, a hurricane seems like overkill. Yet the fury of Hurricane Ida made the first day of the first fully in-person semester since Fall 2019 even more uncanny than it already was, bringing New York City’s first flash flood emergency, a tornado warning and severe thunderstorms.

While no NYU students were hurt, the inclement weather left many students, especially commuters, in a precarious position without adequate warning or support from the university. These students are starting the academic year unable to properly focus on their studies.

SPS senior Jhamal Cruckshank, who commutes from Canarsie, was frustrated with NYU’s belated alerts and email update, the latter of which informed students on Thursday morning that classes would proceed as scheduled.

“Seven a.m. is an okay time, but the mere fact that they knew about the storm earlier — because I got a notification from them to be careful because of the tornado warning from the school the night before — this should have been thought out and planned,” he said. “I wish all of the classes were just placed on Zoom for the day and then next week resume to having normal, face-to-face interactions.”

Cruckshank added that the Thursday morning email came across as cold, since the storm had taken lives and caused untold damage.

“I’m pretty lucky because I live in an area that wasn’t really affected,” he said. “The only thing that was affected was transit … So for something as serious as this, they could have been more thoughtful in order to get the message [across].”

NYU’s delayed emergency alerts left students oblivious to the severity of the storm until it was too late. SPS junior Saleh Alzokari is a transfer student who had scoped out the Washington Square campus with a friend on Wednesday night. Their return trip to the Bronx turned into an odyssey.

“It was just crazy, the water [was] just under your knee,” Alzokari said. “We had umbrellas and everything but [with] the wind it just didn’t help. After that we got to the train, we waited for like 15 minutes, but it was a lot of water coming down to the train… So then we left; we tried to take an Uber. We waited for like an hour, but nobody came. The price was like double the normal.”

After struggling to find room on packed trains and buses, Alzokari and his friend had decided to spring for a hotel room in Manhattan until they finally spotted a bus that was only half full.

Alzokari got home after 2 a.m. As of early Thursday afternoon, he wasn’t sure whether he could attend his first class at 6 p.m. because the train he needed still wasn’t running. He was also worried that if he successfully commuted to campus, leaving around 9 p.m. could put him in a similar situation as the night before.

“At night, the trains suck, like, on a normal day.” Alzokari said. “So I’m thinking about tonight, like, ‘Oh my god, how am I gonna get home?’”

After emailing her professor a heads up, Steinhardt junior Rea Doka made it to class from the Bronx on Thursday afternoon, arriving 20 minutes late. The trip usually takes her an hour on the 5 train, but on Thursday it took her two hours on the 5 and 4.

“I saw the train schedule, and they were delayed, but I just had to go,” Doka said. “I tried to take an Uber, actually, but it was like $100. I also thought of taking the bus, but it was too long — it would take me like two hours to get here. Eventually, that’s what it took me.”

Like Alzokari, Doka was surprised by the intensity of the flooding.

“I didn’t know it was gonna be that bad of a storm; I just thought it was going to rain,” she said. “But then I saw the streets were full of rain and stuff. And I wasn’t sure if I wanted to go to class in person or if I was going to be able to do that.”

CAS senior Kenan Anderson was also caught off guard by the flash floods, especially after he overprepared for Hurricane Henri. He followed the advice on the news to stock up on flashlights, batteries and bottled water; but when Henri hit, the damage to his Lower East Side apartment was minimal.

“My room flooded a little bit, but it was just a quarter inch of water,” Anderson said. “It was more like a leak than really a flood. And then yesterday, out of nowhere, suddenly I’m getting hurricane warnings on my phone, like NYU is telling me to stay home.”

The water in Anderson’s basement room rose to 14 inches at its peak.

“I sat down to watch a movie, like sitting on my bed, and got up and stepped into an inch of water,” he said. “And it was so fast. Within an hour it was like a foot.”

Dealing with the damage has occupied most of his time since.

“There’s also an element of financial stress,” Anderson said. “I probably have to buy a new desk and a new air conditioning unit and possibly a new bed frame, and that adds up. And the more I’m stressed about that, the less I’m thinking about school.”