Please take a moment of silence for Twilight. Gone from Netflix but never forgotten. 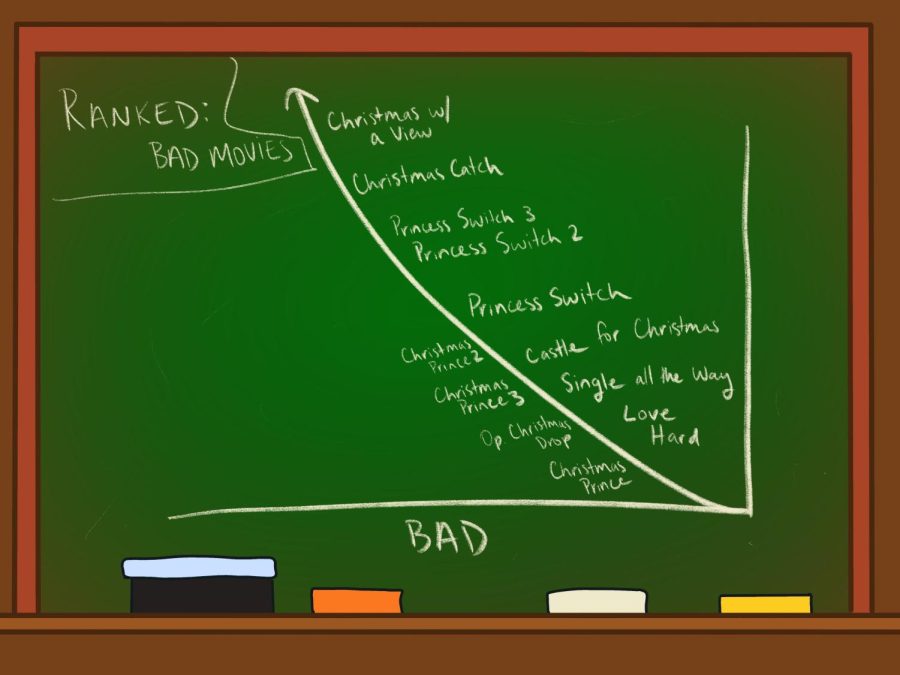 Nothing brings me joy like bad movies. To be completely honest, I don’t think I watch them ironically at this point: Trashy movies genuinely make me happy. I even took a class on bad taste — which is what I have, apparently.

Listen, I’m not a Tischie. If you want to hear about good movies, read an Arts article.

Anyway, before I get to the ranking, let me explain my framework. The way I see it, movie quality works like a parabola. On one side, you’ve got good movies. On the other, you’ve got so-bad-they’re-good movies. Where it touches the X axis are the ones that are bad but not egregious enough to be entertaining. You know, the ones that allow you to feel your brain cells dying one by one. Don’t waste your time on them!

Now, without further ado, here are some noteworthy films you can stream today. Watch them with friends!
5. “Tall Girl” (Netflix)

This one is a perfect example of the mediocrity zone. Yes, it’s bad, and yes, it’s funny, but you can get a lot more bang for your buck elsewhere. That said, it still makes the list because I managed to write an eight-page midterm paper on it for my aforementioned class on bad taste. I’ve researched and analyzed it to death, and I’ve watched it more times than anyone should (twice). Also, director Nzingha Stewart is a Gallatin alum, so do with that what you will.
4. “The Royal Treatment” (Netflix)

You know how when you’re dreaming, you roll with things even if you’re aware that they’re slightly off, then when you wake up you’re baffled by how dream-you believed it was real? That’s how watching this movie feels. It’s as if the whole thing was written, directed and acted by artificial intelligence. The characters almost behave like humans. Almost. Like, who could flirt by saying, “Be the change you want to see in the world” without a trace of irony? And when Laura Marano’s character “stargazes” in New York City by naming the only two visible stars? I felt that.
3. “Christmas with a View” (Netflix)
I know we’re past Christmas, but I watched 12 Netflix Christmas movies this season, and I’m going to make that count for something. In order: “Single All the Way,” “Love Hard,” “Christmas with a View,” “Christmas Catch,” “The Princess Switch,” “The Princess Switch: Switched Again,” “The Princess Switch 3: Romancing the Star,” “Operation Christmas Drop,” “A Christmas Prince,” (not to be confused with “Christmas with a Prince”), “A Christmas Prince: The Royal Wedding,” “A Christmas Prince: The Royal Baby” and finally, “A Castle for Christmas.” (Yes, I permanently skewed my algorithm with that binge. No regrets.)

And of that Ranked-within-a-Ranked, the winner is “Christmas with a View.” My favorite part about it is that they used green screens for everything, including interior shots that really could have been sets — like, they used a greenscreen for a kitchen. Yeah, it’s pretty terrible.
2. “How to Build a Better Boy” (Disney+)
My friend put on this Disney Channel Original Movie as background noise while we were hanging out at his apartment, but it sucked us in. One of his roommates came out to see what we were watching, and he got drawn in, then the other roommate followed. By the end of the film, all four of us were on the edge of our seats, jaws dropped, hanging onto every unpredictable word. This movie is bonkers. It involves a robot boyfriend, Pentagon shenanigans, some serious gal pal tension and a spontaneous ukulele number. (It’s not a musical — they just threw that in there.) Baby Noah Centineo plays a big role. Overall, China Anne McClain deserved better.
1. “Swiped” (Netflix)
This is a deep cut. As a disclaimer, this is by far the most offensive and problematic entry, but that’s part of why it’s fascinating. Where to begin? For starters, Noah Centineo was in a different Netflix original with the same plot (“The Perfect Date”), that was released in the same year. How? Why? Also, the crux of the movie is the protagonist mansplaining feminism to a bunch of sorority girls — and this movie was written and directed by a woman, somehow. The mom from “Good Luck Charlie” is in it. And it looks like the budget was $50. I could go on, but Danny Gonzalez says it all.