Don’t let your memes be dreams <3 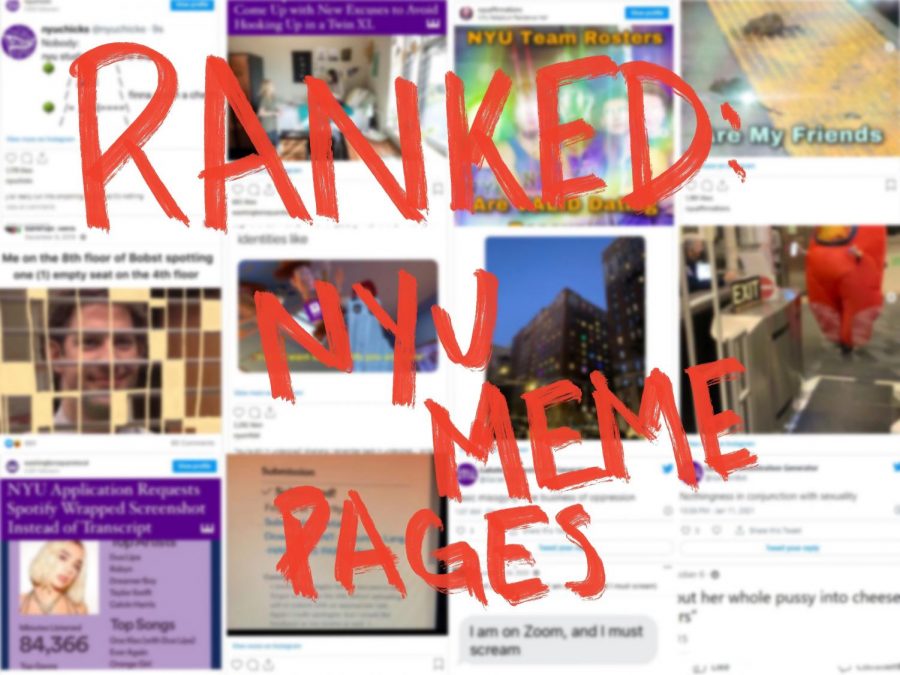 We have to admit, the NYU meme page offerings are lackluster. Maybe NYU students are too self-conscious about their image to say the out-of-pocket things that make less cringeworthy memes. Or maybe our school culture isn’t strong enough to have relatable memes beyond NYU’s Daily Screener and hating Stern. Us judgy Ranked writers like to think we’re pretty funny, and we obviously enjoy critiquing stuff, so ranking NYU meme pages is the perfect use of our talents. A lot of the meme content we read felt like pre-pandemic TikToks, back when TikTokkers were trying to be Viners and were afraid of being weird.

If there’s one thing to take away from this article, it’s that it doesn’t have to be this way! YOU have the power to make quality memes!!!
7. Barstool NYU
Sabrina: I think we all know that Barstool is problematic — as it is directly affiliated with Barstool Sports — but some of the posts are kinda funny. I did laugh pretty hard at the Among Us person showing their ID and Daily Screener in Bobst. Still, it ranks last for me because it’s just … meh.

Joey: The NYU Barstool page fails to meet even the lowly standards for content typical of the Barstool college brand. In that sense, it does manage to achieve one thing — being the perfect microcosm for NYU’s inferiority complex and fulfilling every stereotype about its lack of party culture.

6. NYU Chicks
S: This page just isn’t that funny to me. It’s like Barstool’s not-so-evil twin. A lot of the memes go for low-hanging fruit, like generic self-deprecating jokes about the college experience and cheap shots at Stern boys or high tuition. We all know these things, so there’s not much to see here.

J: The posts showed me that the internet still has the same sense of humor; they’re just repurposed to fit our current stage of life. They are the @bitch of NYU accounts — they aren’t really funny, but they’re nostalgic and reliable. I always know she’s going to be there — a dependable humor queen, if you will.

5. Overheard at NYU
S: This page reminds me of the quotes list I keep for my friends, but I find it less funny because the people quoted are not my friends, so I don’t really care about their conversations. I almost wish there was a little more context for some of the quotes so I could feel more included, but I guess the mystery is part of the charm. Also, it would be funnier if more than a handful of people contributed to it, but such is the way with crowdsourced meme pages.

J: Anything for the charcoochie board, amiright? This account is the closest thing I’ve gotten to human connection at NYU in the midst of our pandemic and antisocial masked-up classes.

4. NYU Memes for Slightly Bankrupt Teens
S: This is THE NYU meme account, but to be honest, I didn’t think they were that funny until I took matters into my own hands and started posting. The page has so many views that I felt like a celebrity every time someone recognized one of my homemade memes. Our photo editor Jake Capriotti is lowkey carrying it now. If you’re funny, the clout you can get here is unmatched. 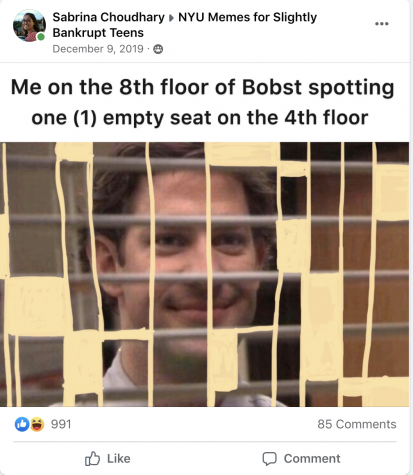 This was my masterpiece. It got 1000 likes and I felt like an influencer.

J: They’re like the Haikyuu!! or BTS of meme pages (I love BTS and Jungkook looked FANTASTIC at the L.A. concert). It’s mainstream but has solid content, and is truly a staple for the NYU community. Thank you for your service.

A post shared by NYU MEMES FOR BANKRUPT TEENS (@nyumfsbt)

3. Washington Square Local
S: This Onion-style page is proudly affiliated with our very own copy chief, Max Tiefer!!! And it shows. It’s hilarious because it’s more creative and clever than most of these meme pages, and it has a consistent voice — Max Tiefer’s voice. And I’m here for it.

See, it’s funny because I work for Admissions 🙂

J: SABRINA JUST TOLD ME THAT OUR VERY OWN COPY CHIEF MAX TIEFER RUNS THIS ACCOUNT. I HAVE TO SIT WITH THIS FOR A SECOND.

Throwback to the days of elevating the twin XL bed, hanging up fairy lights and polaroid pics, and hooking up with the person that lives a few floors down from you. Walking home was taking the stairs back up at 4 a.m. and tip-toeing back into the room in hopes of not disturbing your roommates. This is a solid account, Max Tiefer. All hail the king.
2. Gallatin Concentration Generator
S: Okay, this Twitter account hasn’t been active since Jan. 18, but it’s still vastly underappreciated — it only has 212 followers! Someone made a bot that automatically generates Gallatin concentration titles. You can submit words to their database here. Since it’s automatic, not all of the jokes land, but I did read the tweets with another Gallatin student and she kept saying, “I swear I know someone who does this.” Joey laughed at me when I told her my concentration title. I’m self-aware.

Nothingness in conjunction with sexuality

J: I dunno, is this not a Stern course? “The philosophy of Kantian communities as a reason for traditions,” “The cultural impacts of toxic actions and the anthrozoology of AI.” Do we not talk like this?

Basic misogyny: The business of oppression

1. NYU Affirmations
S: This is hysterical. It’s a simple, consistent brand, whereas other meme pages are messy collections of other peoples’ submissions. It’s universally relatable while staying positive 😉 and it’s original!

J: Affirmations is the person who doesn’t try to be funny — they just are. Unlike the other accounts, Affirmations gets super specific with their posts but remains relatable. I have had so many of these thoughts but have never said them out loud. Thank you for being my voice.

Trust us, it’s pretty good — but you’ll only get the jokes if you join us!

That’s it for Ranked for this semester, folks. Good luck with finals, have a great break and see y’all next semester.