Everyone had the same favorite moment of the Uplive x Hekka show. And it had nothing to do with the clothing. 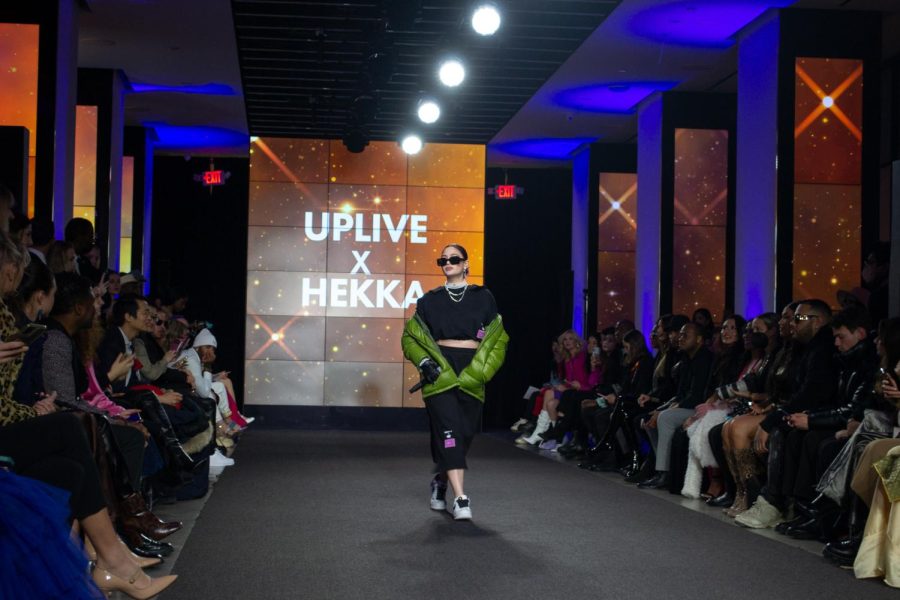 Influencers flooded Moonlight Studios, taking pictures and posting videos as they waited for the show to start. Celebrities filled the crowd, from Maye Musk, mother of Elon Musk, to Bandit the Rapper, to TikTok influencer Axandraaa. The mingling died down as an announcer’s voice crackled over the system, herding the crowds to the white benches around the runway.

As the lights dimmed, actress Arci Muñoz stepped onto the runway to sing a live rendition of “Sweet Child O’ Mine.” What the performance lacked in pitch, it made up for in enthusiasm. The crowd watched silently while Muñoz tried to get them to join, before breaking into polite applause at the end of the performance.

The show was divided into two collections, with a dance performance between them. The first was Hekka’s collection, featuring models in light, flowing dresses that would’ve fit in on a beach vacation. The dresses ranged from short to long, from tiered to wrap to shift silhouettes, styled with loose hair and light heels.

Hekka is a vast online shopping platform, not a fashion house, which may explain why this collection looked more like everyday comfort than high fashion. As the last model left the runway, the generic pop music ended abruptly. Unlike most shows, the models did not come back to the runway together, leaving the crowd unsure about whether they should be applauding.

The show concluded with an activewear collection from Keppi consisting of matching neon sweat sets, bucket hats, and beanies.

“I was blown away by their overall styling, from their shoes to their hats,” singer Ava Breeze told WSN.

Along with activewear, the collection showcased two suits, which appeared out of place with the rest of the pieces. But Amanda Mirus, a handbag designer attending the show told WSN that the piece’s green blazer was her favorite piece of the night stating, “it reminded me of a vintage blazer, it had a vintage feel to it and I really liked that.”

Everyone WSN interviewed, however, from Breeze to influencer Geraldine Moreno, noted that the fast-paced dance crew performance was the highlight. The dance crew broke the crowd’s uncomfortable silence with five enthusiastic dancers in cohesive brown and pink outfits.

“It was really great, really lively, they brought the energy, and it was just overall really creative,” model and attendee Destiny White told WSN. “I loved the dancers.”