Diamond in the rough: THEO continues mining for brand identity

Is it supposed to be subversive minimalism or tacky ZARA party glam? 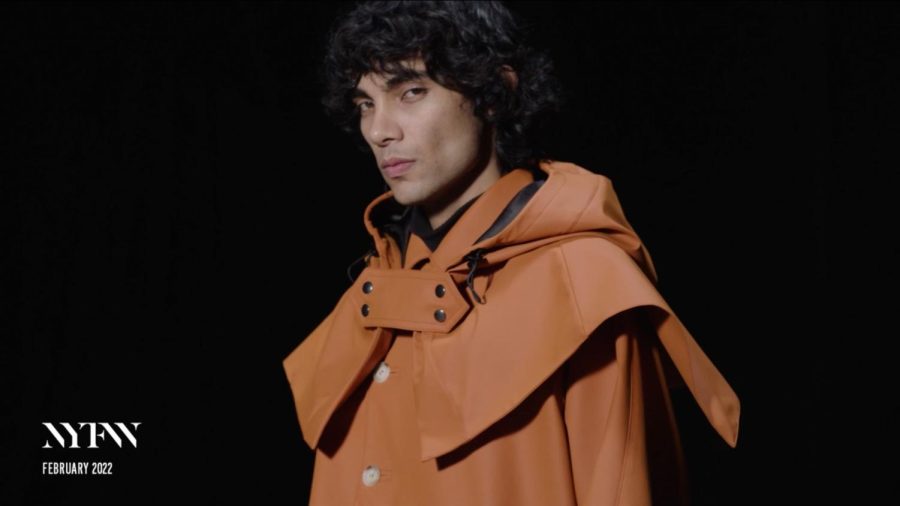 THEO’s digital presentation of its Fall/Winter 2022 collection, “_Crystalline_,” was confusing. THEO, lead by designer Theo Dekan, is a Kyiv-based fashion brand that erases boundaries and “offers an edgy take on traditional fashion codes” by subverting the notion that minimalism is boring. But its collection this season was strewn with acid green and brown suiting sets alongside sheer blue and pink glitter dresses whose inclusion only made it clear that THEO has lost its aesthetic cohesion.

I initially thought the show was unreasonably simple. In comparison to past exhibitions — which were held in an empty parking lot and a winter wonderland — this season’s runway was just a boring stone floor with a black backdrop. It was far too plain.

However, the simple backdrop made the clothes the spotlight. The menswear looks that featured burnt oranges and pastel butter yellows gave the collection life. THEO reaffirmed its status as a master in minimalism with brand-staple silhouettes that have appeared in past seasons, like its black and white leather tracksuits and black glitter tailored suits paired with a black mesh turtleneck. The most ravishing look of them all was a burnt orange trench coat whose lapels featured a cape-like construction with fisherman drawstring accents, embodying THEO’s trademark futuristic essence.

The womenswear, however, was overcompensating with its oversized silhouettes in marled grays and creams with rainbow melange, which seemed interesting at first, but soon became repetitive and stale. While the show aimed to lean into the pandemic-sparked obsession with comfort and leisure, the maxi dress silhouette was simply frumpish and unflattering. The same was true for the velvet bow-tied maxi dresses that gave the misleading impression that the show was a Spring/Summer collection. There were looks that paralleled the craftsmanship of the menswear. A brown croc leather trench coat with white ties strapped to the shoulders was well presented. However, when compared to its sister look — a matching top and bottom set — it just looked frumpy and tacky.

The sunglasses and statement jewelry pieces were the show’s redeeming qualities. Ski visors and hardware goggles, reminiscent of John Galliano 2000s Dior and contemporary Balenciaga’s butterfly visor sunglasses, elevated maxi puffers and scuba-sleek pieces. Crystalline Y-shaped statement necklaces were one of the references to the show’s title, along with the KiraKira glitter overlaid on models’ faces. These gestures felt forced and awkward and did not do not enough to uphold a non-existent thematic throughline for the collection.

THEO is in the midst of an identity crisis. With the success of its minimalist presentations from past seasons, there should be no reason to change. Expanding boundaries is only natural for designers, but the excessively loud colors and patterns that attempt to counterbalance the simplistic black and white only undermine the brand’s reputation. Even with this diamond in the rough collection, THEO’s premise and establishing ideals of divergent experimentation are undoubtedly strong. Given its past success and the engaging color aspects of this show, THEO has the potential to find the voice it once had.