Flying Solo stands out in SoHo 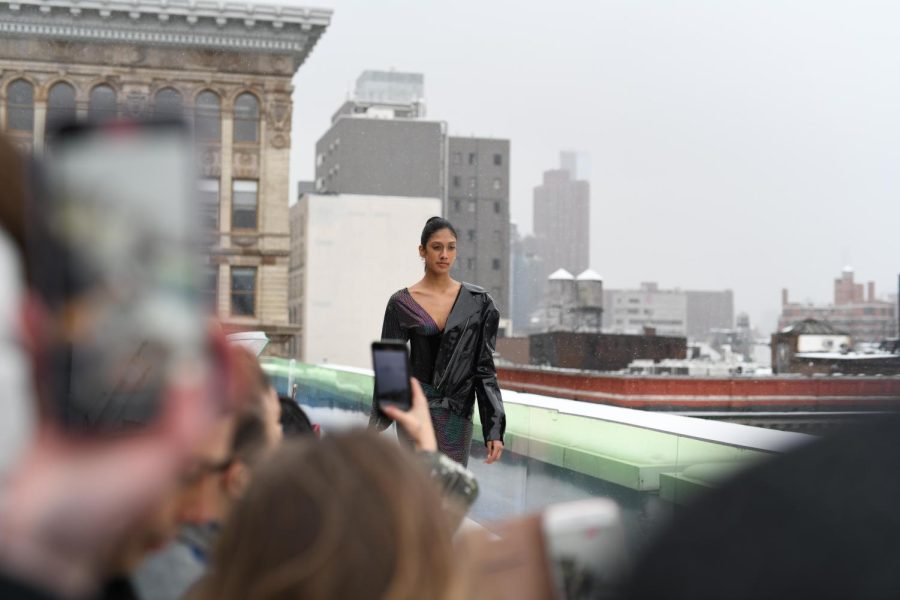 Flying Solo, unlike most other designer brands advertised in New York Fashion Week, is a coalition of independent designers working together against the fashion industry’s harsh competition. The brand connects fashion designers through global collaboration in order to create a diverse, welcoming environment that can lead small clothing and accessory companies to success.

Flying Solo’s NYFW Fall/Winter 2022 show upheld their goals of representation and connectivity. The brand hosted five different shows, all with several different designers. The designer lineup included talent from Spain to New York. Each show featured eight designers and their respective collections. Models from different collections walked back to back, keeping the theme of collaboration and unity among the designers associated with Flying Solo.

Unfortunately, the brand’s venue fell flat in comparison to the vast collection. The show was held at Cubico in SoHo, sandwiched between Broadway and Mercer Street. The location of the venue was perfect — right in the heart of the fashion capital of SoHo, not far from the Canal Street subway station. But while it might have been easy to access, the show was held on a rooftop and required spectators and designers to stand. Freezing temperatures, snow flurries and hours of standing don’t mix well with high-end fashion.

The runway itself ran along the edges of the building, giving guests a good view beyond the models. The show began with a collection of elegant evening wear and sophisticated silhouettes. Sol by Irena Soprano used neutrals like black and white to emphasize simple shapes. Texture, such as feathers and shimmers, made plain garments come to life.

The second collection of the show, designed by Zina Untu for her eponymous brand, followed the theme of simplistic elegance. However, this collection approached the traditional suit with a twist. Using exaggerated collars, cropped suit vests and contrasting proportions, the collection brought something new to a classic style.

Saba Asad’s collection then turned the tables and proudly stood on them. The garments varied in color and silhouette, but all featured the most beautiful usage of lace-like bead embroidery I have ever seen. As snow fell lightly on the rooftop, the elaborate jackets and dresses glittered with floral patterns overlaid onto stunning pastels. The combination of detailed, beadwork and modern silhouettes made for culturally graceful and wearable pieces.

The fourth collection to walk the runway brought something untraditional to the show: headwear. Kat and Clarese is a designer duo specializing in floral hairpieces. As these elaborate pieces of wearable art were walked down the snow-covered runway, it was easy to tell that they were the star of the collection. The pieces were flattering and smartly styled with simple attire in complementary colors. With sleek garments to support them, the headpieces easily kept the audience’s attention.

The fifth collection by Revista L’Officiel Brasil in the Flying Solo show was my least favorite, but not for a lack of effort. The garments used bright colors and vibrant patterns that seemed out of place next to the previous, more restrained collections. Likewise, the copious use of tule and unnecessary belts made the collection look tacky. Sometimes less is more.

Designer Silk Epoque revisited the sophisticated and muted looks of earlier designs in the sixth collection. However, the clothes lacked inspiration. The floral, pastel purple designs were beautiful and the collection flowed well, but it was dry. There was nothing new to get excited about.

The next collection brought the excitement that the last one had lacked. Designer Ruth Esther abandoned traditional evening wear and embraced streetwear aesthetics. The collection focused on innovative use of texture in jeans, lace and leather. The results were patchwork-style jackets that could make a cowboy cry, elaborate bodysuits emblazoned with glistening gems and a stunning gown fit for fairies. In between pieces that explored texture were garments that embraced pattern.

They say you should save the best for last, and Flying Solo certainly did. Gabriella Rose’s Paniculata collection stole the show and ran to Brooklyn with it. The collection, which she fittingly named “Run It” combines casual wear with couture in an easy and accessible way.

The transition between collections was seamless. If it weren’t for the designers preceding their collections on the runway, I never would have noticed it was a new collection. Generally, there was clear cohesion both between and within designers’ collections.

While the snow may have interfered with some aspects of the Flying Solo show, it did not derail the eight talented designers from displaying their collections and bringing their bold ideas to NYFW.