NYU students share their experiences with looking for fun and more on the Grindr app. 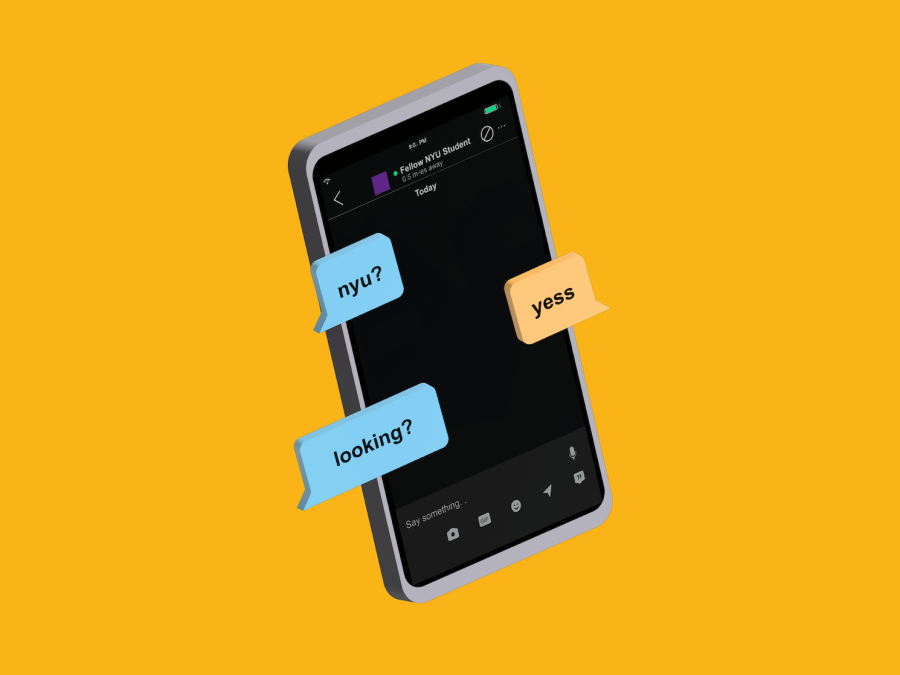 Grindr provides love, lust, validation or a mix of all three for the LGBTQ+ community. (Staff Illustration by Susan Behrends Valenzuela)

Whether you’re using it to find love, lust or some much-needed validation, dating apps are a quintessential part of the college experience. Especially in New York City, the available pool of singles is seemingly limitless — particularly for gay and queer men on the infamous app Grindr. Launched in 2009, the app has over 27 million users, and it seems like NYU students like myself make up at least 10% of the app’s population.

In my first year at NYU, I bestowed upon myself the title “Princess of East 11th Street,” in honor of the frequent visits I had on the block. Needless to say, I no longer wear that crown, and my search for a prince is still ongoing — though maybe not on Grindr. While Grindr has a reputation of soliciting hookups with a slim chance of finding love, these NYU students spoke to WSN about some of the different ways they use the platform.

CAS sophomore Justin — who asked that only his first name be used — had his first experience on Grindr when he moved into his first-year dorm in the fall of 2020 while NYU students were quarantined. Justin followed quarantine procedures and decided to meet up with someone after he finished his 14 days.

“Right after I got out from quarantine I did meet up with this one guy who took me to a sushi place for a little cute date night and then we went back to his place and had a little fun,” Justin said. “And today, we’re still good friends.”

Justin uses Grindr to network and find meaningful connections as opposed to simply hooking up. Justin is a data science major, and the app has been a good resource for meeting men while furthering his career goals.

“There’s a lot of great people that I’ve met on Grindr that I still connect with,” he said. “They’re mostly younger millennials in their 30s, like professionals, and they give me a lot of career advice because you know, I aspire to be a working woman. They always help me with my resume or my cover letters, so I’m like, ‘Okay, not only is this good sex, it’s a good resource to have.’”

While Justin now uses Grindr in the way one uses LinkedIn — he even hears about internship opportunities through men he meets on Grindr — he does admit that there’s a learning curve to the app.

“When I started hooking up, it was hard to distinguish lust from a meaningful connection,” Justin said. “It’s literally like taking a class — it’s like a four-credit class. When you’re 18 it’s like, you don’t really know the connotations of Grindr. So you have to learn how to be safe on it.”

Though Justin says Grindr users have to learn on their own how to get guys and take nudes, he also appreciates the app’s reminders to get tested for sexually transmitted diseases and take PrEP, a medication that protects against HIV.

CAS sophomore Zachary — who also withheld their last name — also began using Grindr in the fall of 2020. Zachary shared their first experience on Grindr as a cautionary tale to its new users, as they were sexually assaulted by the first person they met through the app.

“My No. 1 recommendation would be not to use it,” Zachary said. “I think it’s more damaging than good.”

They admit Grindr is like a drug, creating an obsession. Zachary hasn’t just used Grindr to search for fun or relationships — they also use the app to facilitate sex work.

“I think there are other apps that are better suited for relationships or friends or romance,” Zachary said. “However, just because of the nature … Grindr has become less and less like a place of enjoyment for me and more like a place of work.”

Zachary discovered they could use Grindr for sex work after an older man, whom Zachary met at his luxuriously decorated Broadway apartment, offered them money in exchange for a kiss on the lips.

“From then on, I was more willing to accept the advances of people who I wasn’t particularly interested in if they were offering me cash, because I’m a poor college student,” Zachary said.

Mathew Rodriguez, an adjunct instructor in NYU’s journalism department, worked as a staff writer for Grindr’s magazine Into from 2017 to 2019. He says the app is another addition to the various ways queer people have united despite opposing outside forces.

“Queer people since the dawn of time have been looking for ways to find each other — that’s just a part of queerness; we are kept apart,” Rodriguez said. “So there will always be a necessity for queer people to find each other in some way. And I do think that right now, obviously, with the pandemic and everything, we’re more on top of our phones than ever before.”

He says the platform’s purpose is for queer people to find connections, sexually or otherwise.

“I think people think of [Grindr] only sexually because people often don’t have a way to read queerness outside of sexuality,” Rodriguez said. “The truth is queer people connect on Grindr in so many ways other than just sex, from finding roommates to just having someone to talk to. So I just think it’s an app about connection.”

However, Rodriguez emphasized those connections needed to be made safely. Fears of being killed after meeting someone on Grindr stem largely from a legacy of homophobia, they said, but the conversation about safety should instead focus on digital privacy, especially with the app’s recent data leaks.

“The thing that has been touted as an issue for a while now, even from the U.S. government as well, is whether or not this is safe in terms of data privacy,” Rodriguez said. “So when people ask if Grindr is safe, I’m like, I think you’re talking about, ‘Am I going to be killed?’ when really you should be talking about having info or location leaked.”

Rodriguez believes that there is an imminent risk to anyone who uses dating apps regardless of their sexual orientation, though he acknowledges that it is a little more complicated for LGBTQ+ users.

“Right now, in America, there’s not a robust way of teaching queer people about consent and what sex should look like,” Rodriguez said. “So I do think that if they’re going to be on an app looking for sex, people should be at least more aware of consent and sexual autonomy.”

Despite the risks, Justin and Zachary continue to find people through Grindr and even shared some of the best locations to connect with other Grindr users while at NYU or in New York City.

“If you’re a top, you should open Grindr near NYU because NYU is bottom central,” Zachary said. “I would know — I am one.”

They both share the sentiment that Greenwich Village is the perfect place to find a bottom, someone who prefers being on the receiving end in the bedroom. Meanwhile, Hell’s Kitchen is better for finding tops, those who enjoy being on the giving end. And Justin recommended Kips Bay for finding secretive or repressed men seeking to hook up on the down low — “if you’re looking for straight DL bros with no face pic or you want to taste a straight cock.”

Whether you’re looking for sex, a new friend or someone to connect with, Grindr offers a lot to its users. No matter how attractive a user’s profile might be, though, safety takes precedence over sex. For new Grindr users, here’s what these experienced users have to add that could save you from heartbreak or an STD.

“Don’t take it too seriously,” Justin said. “Be open to what you’re looking for on Grindr, because it’s a very, very deep world of Grindr, and you can find a lot of things you might be interested in.”

I certainly remember my beginning days on Grindr when I, too, browsed the selection of my peers who were quarantining less than 100 feet away, according to the app’s location feature. From one Grindr user to another: Don’t go to someone’s apartment without seeing a picture of them first, and definitely don’t forget to use protection.

“Be clear about your boundaries from beforehand — don’t rush at anything because you think nothing else will come,” Zachary said. “There are millions of gay people in this city, and you have opportunities to do whatever you want to do with someone at some point. Don’t settle for less. And protect yourself — get on PrEP and use condoms. It might seem uncool, but you know what’s more uncool? Herpes. It’s permanent.”