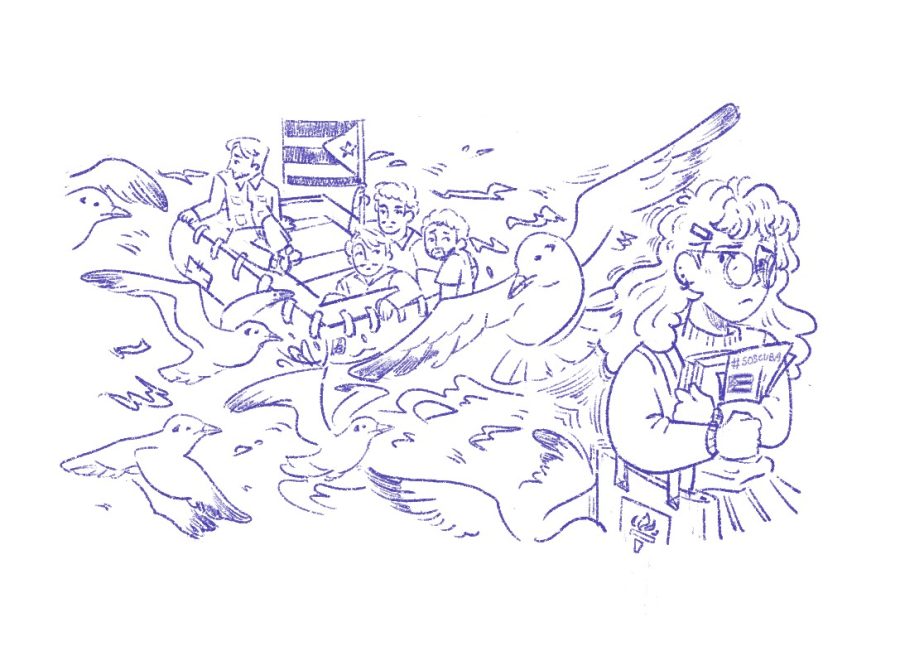 The Cuban revolution took place in the 1950s, during and after which thousands of Cubans immigrated to the United States. Cuban and Cuban American students at NYU continue to define and redefine their identity as members of this diaspora. (Illustration by Shepherd Busse)

Around 2.4 million Cuban immigrants have taken residence in the United States as of 2017. This diaspora consists of three generations, ranging from recent immigrants to third-generation immigrants whose grandparents immigrated. For some NYU students who are a part of the Cuban diaspora, expressing their heritage is complex.

A recent association between Cuban Americans and former President Donald Trump as a result of the 2020 election has caused many first-generation Cuban immigrants, such as CAS sophomore Odette Rodriguez Garcés of Washington, D.C., to define a clear difference between Cubans and Cuban Americans. Some Cuban Americans simplify their identity to Cuban rather than Cuban American, holding on to the heritage of their families. This is different from being a Cuban national — someone born and raised in Cuba.

Although younger generations of Cuban Americans lean further left than their older peers and relatives, media coverage of Miami during the 2020 election portrayed Cuban Americans — and by extension Cubans — as a single bloc, a phenomenon that Jon Elliston of the North American Congress on Latin America described in 2007 as “the Myth of the Miami Monolith.”

Vouching for Cuba as a Cuban has been weaponized against Cubans themselves. Fidel Castro’s rhetoric regarding people who fled Cuba has been appropriated online, used against any Cuban in the diaspora — they’re traitors. Others simply dismiss the experiences of diasporic Cubans. LS junior Stella Caridad Salomone Sotolongo, a first-generation Cuban Italian who has lived in Havana since the age of 12, described such arguments with non-Cuban peers.

“I’ve seen lots of [NYU students] using Cubans as political tokens in the sense that they’re like ‘See, this is what communism does!,” she said. “And extreme leftist NYU kids say, ‘See! This is the effects of … the embargo, and American imperialism!’ You can’t debate it when you know that there’s people that have actually lived in it. I’ve had to argue and debate my own trauma and my own life to literally every single person I’ve met.”

However, discourse about the intricacies of Cuban identity and experience does not take place only between Cubans and non-Cubans. First-generation NYU alum Marcy Melian emphasized her annoyance with Cuban Americans who self-identify as solely Cuban — it suggests that the two identities are synonymous.

“I know a lot of people in Miami consider themselves Cuban, even though their parents were born in Cuba and they weren’t,” Melian said. “And I think sometimes that’s a little irritating. Just because you’re still Cuban. I’m not saying you’re not, but like the way that you describe it, like someone will be like, yeah, 100% Cuban.”

Melian left Cuba at age 4 and grew up outside the country, partly in the Dominican Republic, for the next eight years. Later, she and her family moved to Miami; she still very much feels Cuban and visits the island regularly.

For others, the distance created by the diaspora means apprehension about expressing their Cuban ethnicity and culture — an identity crisis.

CAS senior Nina Vasquez, a second-generation Cuban American from Miami, related this sentiment back to her struggles with peer validation, especially among other Latine peers.

“You definitely don’t feel as American as maybe other people do, but you then don’t feel as Latin as the people who have grown up in their Hispanic countries before,” Vasquez said.

LS sophomore Kevin Ferro — a first-generation Cuban from California whose family won a chance to go to the United States through a U.S. Embassy lottery system in the early 2000s — hypothesized that the source of grievances shared by many second- and third-generation Cuban Americans were a byproduct of cultural assimilation.

“The people that came in the ’70s and ’80s tried to Americanize themselves more, just because that was what you had to do,” Ferro said. “And it led to more distancing themselves from the Cuban culture.”

Tandon sophomore Alexis Williams, a second-generation Cuban American, had a conclusion similar to Ferro’s. Her mother, who came to the United States during the Mariel boatlift in the 1980s, had worries about teaching her Spanish while growing up.

“She didn’t really teach us Spanish,” Williams said. “She didn’t want us to have accents. The reason why my name is Alexis is because she wanted us to feel very Americanized in all aspects of our lives.”

Even though she was not taught Spanish at home, Williams has connected with her heritage by learning Spanish in school, speaking with Spanish speakers in New York neighborhoods, and immersing herself in the history of Cuba through literature and films.

Despite assimilating into American culture, some families still embrace their Cuban heritage. Tisch sophomore Gabriel Pupo — a second-generation Cuban immigrant whose family came during different time periods, ranging from the ’60s to present-day balseros — has friends and family that stayed on the island. With those connections, Pupo feels like he is very much Cuban.

“I grew up in Miami and had a completely Cuban household,” Pupo said. “I went to a [mostly Cuban] elementary school, and then I went to a Jesuit all-boys school originally from Cuba. I’ve been around Cuban teachers, Cuban faculty, Cuban family, Cuban friends, since I was born, so [being Cuban] is very much my life.”