TikTok account @womenofhistory is the education you’ve been missing

Our K-12 curriculum needs an update, but for now we have Sanjana Bhambhani. 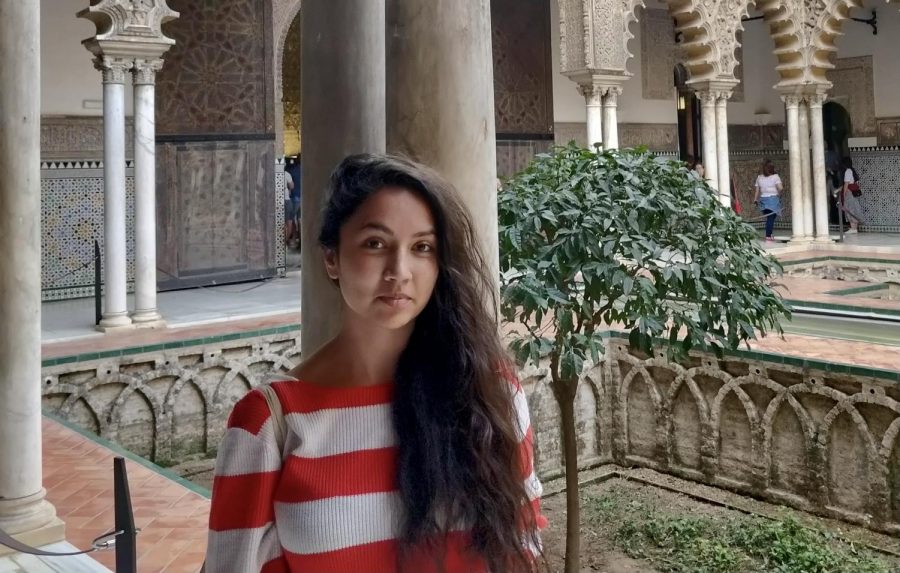 Sanjana Bhambhani, a CAS senior, runs the trending TikTok account @womenofhistory. Many accomplished historical women are overlooked in K-12 education, but Bhambhani’s videos are giving these women the recognition that they deserve. (Image courtesy of Sanjana Bhambhani)

At least once a week, I pull out Google Maps to make sure I’m going the right way. Each time, I silently thank the woman who devised the basis of GPS technology — actress Hedy Lamarr. I only know Lamarr was an inventor because of @womenofhistory, a viral TikTok account created by CAS senior Sanjana Bhambhani.

Bhambhani shares inspiring stories of historical women who, despite their accomplishments, are still not widely acknowledged. She tells these stories through hilarious skits, clever responses to sexist ideas, videos of women currently making history and information on current events. The account has over 178,000 followers and its most popular video has one million views at the time of writing.
@womenofhistory

♬ Classical Music – Classical Music
The account resonates with so many because it teaches hidden history. K-12 history classes love to name-drop Susan B. Anthony and Amelia Earhart, but have you heard of Noor Inayat Khan? She was the first female radio operator sent to Vichy France as a spy during World War II, and her radio transmissions became key to the liberation effort.

She was only 29 years old when she was captured and later killed at Dachau concentration camp. Hearing her story broke my heart, then angered me — why had I never heard her name before?

While attending school in New Delhi, Bhambhani learned history that was centered around men. She wondered why she never learned about women leaders.

“It made it difficult for me to imagine myself at the top of many different industries that I was considering … and that can be a little bit disheartening,” she said.

Bhambhani began researching these women during quarantine as a way to imagine opportunities for herself after graduation.

“It wasn’t that women like myself hadn’t done amazing things, it’s that in many cases either their inventions or their creations were attributed to other people,” she said. “I was in many ways looking for role models — women I could identify with who were passionate about their careers and had made a difference in the world; women whose stories might click with me and inspire me to go, ‘I want to be like her!’”

She wants her videos to reach young girls so they can see what they’re capable of while growing up.

Through her research, Bhambhani has encountered disproportionately more stories about white women than women of color. This disparity is unfortunately not surprising. To find female role models for everyone, Bhambhani works hard and combs the internet for buried stories.

She makes a point of sharing at least as many stories about women of color as she does about white women, not an easy task considering these women’s exclusion from the history books.

“Sometimes the most interesting stories are ones that haven’t been reported on by major news organizations,” she said. “I need to look into it and see if there’s different sources that I can use to substantiate it, otherwise I can’t share [the story] because I really don’t know if it’s true.”

Bhambhani fact-checks every story and often provides her sources in the comments section. This process can be frustrating: She often receives comments disputing her research and sending her untrustworthy counterevidence.

On the other hand, Bhambhani’s college education has at times been more inclusive than her childhood curriculum. For instance, this semester, her science professor Trace Jordan dedicated an entire lecture to Rosalind Franklin, a female chemist whose work to discover the structure of DNA was claimed by two men.

“I think we’re slowly progressing towards a time when there are more women included, and women of color specifically,” Bhambhani said. “We’re addressing that side of things, as opposed to what the norm has been for so long of having a lot of stories about successful, white, cisgender heterosexual men.”

Teaching students about women like Franklin can be deeply impactful. Women like her deserve to be included in curricula. Bhambhani is currently helping to fill this void for her TikTok followers — she is for me, at least.

Every time I watch one of her TikToks, I find a new woman to thank, admire and honor. Each video leaves me feeling like there needs to be a movie made about this person’s life. But first we must know their names.

Disclaimer: Sanjana Bhambhani was a staff writer for the opinion desk during the spring 2020 semester. She did not view or edit this story prior to publication.