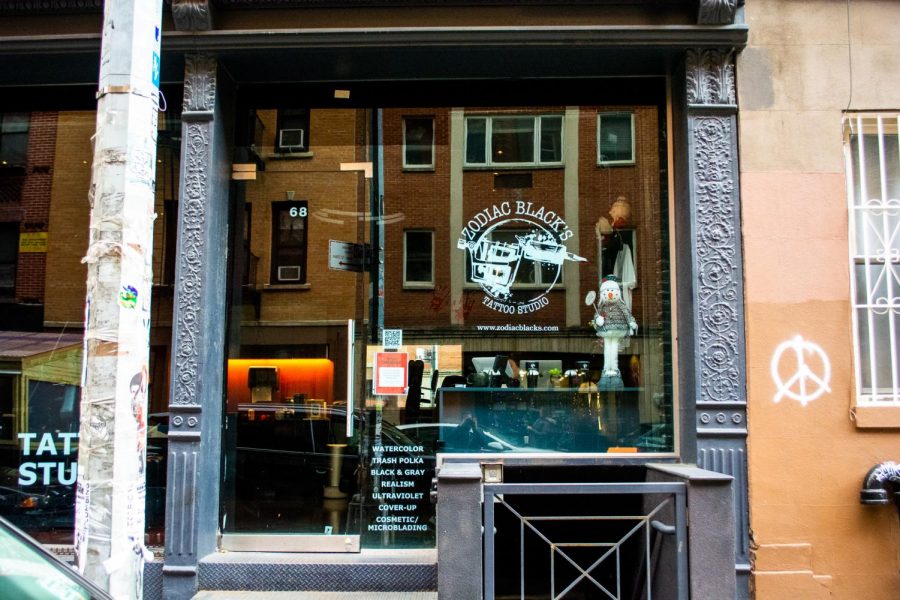 Getting a tattoo can be an overwhelming and vulnerable experience. After all, you are trusting someone to ink something that will be on your body forever. At Zodiac Black’s Tattoo Studio, located at 68 Thompson Street in SoHo, co-shop owners Britta Christiansen and Alex Sokolov seek to create an inclusive and welcoming environment where anybody can feel comfortable getting a tattoo.

Christiansen has heard many stories of clients, especially women, who have dealt with toxic energy or have even been assaulted at other studios.

“It was really important to me that this is not that place,” Christiansen said. “That everybody comes in, gets the service they want, gets the tattoo they want and feels also safe about it.”

The all-women tattoo studio opened in 2020, with safety precautions like masking and limited capacities. The owners also worked with clients to make the experience as comfortable as possible, like allowing first-time clients to video call a loved one for support.

Christiansen believes that a tattoo becomes a part of someone that stores memories like a photo or diary.

“When I was 18, I got one of these picture-from-the-wall tattoos,” she said. “Nobody told me back then that tattooing was an art form. When I became a tattoo artist, it just made me realize that there’s so much more to tattooing than copying pictures.”

Growing up, Christiansen wanted to be an artist, no matter the medium. She developed a passion for tattooing due to its intimate nature.

“Working as a tattoo artist means so much to me because I meet so many different people. I’m part of their personal life story from that moment that they get a tattoo from me,” she said.

Christiansen has been tattooing for 18 years, starting in Germany, where she is from, and then in Amsterdam. Ten years ago, she moved to the United States, working in California and then in New York City. Over the years, she has refined her style and craft, focusing on watercolor, which allows her to experiment with different hues.

Christiansen built Zodiac Black’s around the belief that tattooing is an art form. From the tattoo artists to the shop managers, everyone working at the studio has an artistic background — one of them is a makeup artist and the other is Christiansen’s apprentice. As a result, Zodiac Black’s is as much an inclusive space for artists as it is for clients.

“I want to pick up and teach more women to tattoo because I don’t think we have enough females in the industry,” Christiansen said.

LS sophomore Briggs Luisa Negrón had a positive experience with her first and only tattoo, but she noted that her experience getting a piercing in Spain was cold and unwelcoming.

“I think an all-women tattoo studio is an awesome idea,” Negrón said. “I think it would be a less intimidating and more welcoming place to get a tattoo. I loved the place I got my tattoo, but I definitely felt very intimidated walking into [a space with] all of these tatted-out guys.”

Steinhardt sophomore Vanessa Li has had positive experiences at tattoo studios, but like Negrón, she likes the idea of an all-women tattoo studio.

“I know that people can generally feel uncomfortable or scared getting tattoos on sensitive areas,” she said. “Having an all-women tattoo studio would be so cool in that it can foster a more trusting relationship between the artist and the client.”

Tisch sophomore Zoey Kapinos got her first tattoo at another all-women tattoo studio.

“I had thought that it might be a more comfortable situation for myself and it totally was,” she said. “It’s awesome that there is the growing option of all women studios for clients but also just to change the stigma about women being in the tattoo industry.”

Black Zodiacs in astrology represent the dark side of all zodiac signs. The studio’s namesake is a testament to the idea that anything negative can be made positive. Though it opened during a pandemic, the studio channels a positive energy through its artistry and service.

With a minimum fee of $250 for any tattoo, this studio is not affordable for every NYU student, but hopefully, its impact on the industry for both artists and clients will improve the experience of getting a tattoo.