Veselka, the heart of Ukrainian solidarity in New York

The Ukrainian restaurant has been at the center of local support for Ukraine, fighting against the Russian invasion with what they have: food and community. 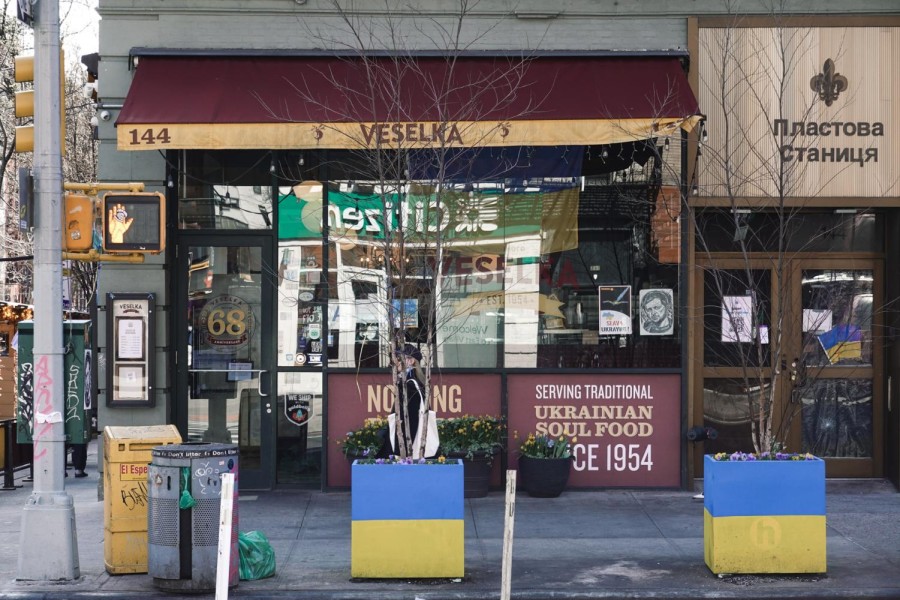 Veselka is a Ukrainian restaurant in the East Village owned by Jason Birchard. (Photo by Kevin Wu)

As soon as you enter the little restaurant on the corner of Ninth Street and Second Avenue, a kind staff and warmly lit space welcome you. The constant lively chatter from numerous patrons and the smell of fresh food make Veselka the ideal place to enjoy a relaxed meal and feel right at home. These days, though, the popular Ukrainian restaurant stands for a little more than that.

As far as gastronomy goes, Veselka is known for its pierogies and borscht. Pierogies are boiled or pan-fried dumplings with a sweet or savory filling like potato, meat, cheese or fruit; borscht is a soup known for its beetroot-red color.

Many posters at Veselka read “Eat Borscht, Stand With Ukraine.” With Ukraine seeking aid against the Russian invasion, Veselka’s owner Jason Birchard is donating the funds he raises from borscht sales to the Ukraine relief effort through the New York-born organization Razom for Ukraine.

In part due to the restaurant’s call for donations, support for the restaurant has increased tremendously. Over the last two weeks, the number of customers has more than doubled — the restaurant is packed at all times, with long lines forming outside. Prior to the invasion, Veselka served 600 to 700 people weekly. They now average 1,500 customers a week.

Oleksiy Ostapok is a 27-year-old Ukrainian staff member at Veselka. Ostapok was recently hired there — he used to work at Mari Vanna, a Russian restaurant. Because of the war, Ostapok said he had to quit the restaurant, overwhelmed by the presence of Russians.

“I needed to isolate myself,” Ostapok said.

He felt more welcomed by Veselka’s staff and has quickly adapted to the new environment. He also expressed his gratitude for the incoming support both financially and emotionally.

“Customers support us,” Ostapok said. “They are writing sweet statements on checks.”

Aside from their kind attitudes, customers have also been trying to do their part by bringing donations to the restaurant.

“Veselka is a base,” Ostapok said. “Many people are bringing diapers, food and clothes.”

The restaurant has also become a center for rallies and protests where attendees carry signs with statements like “My family wants to live” and “Stop Putin!”

Many celebrities have taken to social media to show support for Ukraine and the restaurant. Birchard mentioned in an interview with The Guardian how hard the pandemic had been on Veselka. Like other small businesses, they had to shut the restaurant down for eight weeks, but now it’s constantly buzzing with large crowds of people.

In addition to its customers, many staff members are eager to give back to their country. According to Ostapok, some of the Ukrainian staff members, including Birchard, wanted to return to their country and fight in the war. About 40% of the staff at Veselka are from Ukraine, and many have family and friends still in the country. However, they ultimately chose to remain and support the war by raising funds and collecting donations.

“All Ukrainian workers here are all in pain as many friends, family members are dying,” Ostapok said.

Many of he friends and relatives have managed to stay safe in Ukraine and are trying to live regular lives, despite the occasional bombings.

“It is pretty much safe. They have food. They are not blocked. They can walk their dogs,” said Ostapok. “There are bombs sometimes, but it’s still not that dangerous.”

He expressed sympathy for his wife — he said that her friend, a soldier, had recently died to a Russian bomb.Veselka’s website lists resources needed for the Ukrainian relief effort. The restaurant is also accepting donations of first-aid kits, quick meals like canned food and energy bars, and cotton socks and T-shirts.