Bloc Collective is cool, but it’s not the next White Claw

The new canned cocktail brand connects consumers to events in their cities through QR codes on the cans. However, Bloc Collective’s impressive taste is likely too pricey for college consumers. 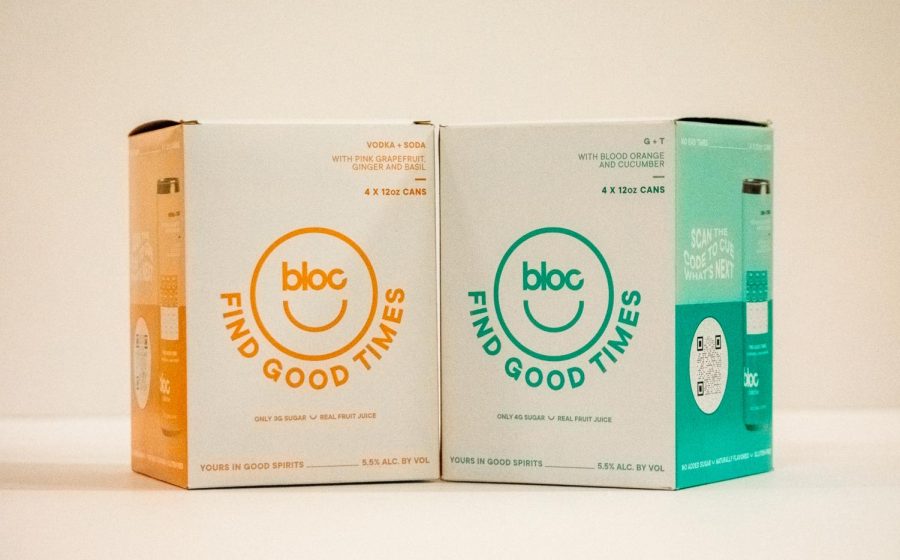 Launched in New York City, Bloc Collective is a new brand of canned cocktails Their packaging has QR codes that link consumers to local events. However, the cost of the cocktails may make them inaccessible for college students. (Staff Photo by Manasa Gudavalli)

If you follow our work, you know that we appreciate a good hard seltzer. Bloc Collective is an enthusiastic new kid on the block that delivers quality canned cocktails and a list of fun things to do through a QR code on their can. The drink itself surpassed other hard seltzers we’ve tried, but until its price decreases and its target demographic becomes clearer, it will not dethrone White Claw as the college seltzer of choice.

The brand launched in August 2020 when founder Rob Dickens wanted to make a hard seltzer with more natural and nuanced flavors than what could be found on the market — especially when there seemed to be a light at the end of the pandemic tunnel. Using revival as their theme, the brand aims to celebrate the experiences that we are no longer missing out on.

“And we loved the idea of making the can part of that, not just something that you take liquid out of but something that contributes to the night in some way,” Dickens said.

Dickens partnered with mixologist Sebastian Tollius, head bartender at Michelin three-star restaurant Eleven Madison Park, to craft Bloc Collective’s flavors. There are two so far: gin and tonic with blood orange and cucumber, and vodka and soda with pink grapefruit, ginger and basil. Tollius was inspired by classic cocktails, but added flavor twists without making them too bizarre. Dickens claimed that those secondary notes set Bloc Collective apart from other canned cocktails.

“It adds a depth that you don’t get in some of these hard seltzers,” Dickens said. “I promise you it’s gonna taste three or four times better than the closest hard seltzer you’ve tried.”

Tollius and Dickens aimed for drinks that were refreshing and not overly sweet. They also used a higher alcohol-by-volume than some seltzers, but not so high that you can only drink two.

We were impressed. Bloc Collective ranks above the other hard seltzers we tried in November. The vodka and soda flavor was far superior to the gin and tonic — there’s a reason you’ve never heard of artificial cucumber flavor. The vodka and soda tasted almost like Orangina, super fruity but without too many bubbles. We could taste all the notes except for the basil.

We took the liberty of trying the gin and tonic again — for research purposes —  without contrasting it to the vodka soda. Dickens was right: The flavor profile is light and refreshing, and kind of addictive when you try it in isolation.

But like all good things, Bloc Collective’s classy cocktails come at a price — $15 for a four-pack, to be exact. For reference, White Claw doesn’t sell four-packs; but judging by their 12-pack pricing in Manhattan, we calculate that a four-pack would be about $8 if they did.

Dickens indicated that Bloc Collective isn’t trying to be the cheapest seltzer on the market, but rather a high-quality one.

“Everyone is in a race to the bottom, like, ‘How can we make this as cheaply as possible?’” he said. “Our flavor comes from real fruit juice and real natural components.”

Bloc Collective is a great product, but its aim to reach a younger audience and become a cultural asset seems far-fetched. We’re just not sure how many kids our age would be willing to pay $15 for a four-pack of blood orange and cucumber instead of getting fucked up for cheap. Plus, most alcohol starts to taste the same when you’re drunk enough, so do nuanced flavors really matter?

Furthermore, Bloc Collective’s event list through a QR code on the cans is a fun concept, but its target demographic is unclear. The activities range from obscure dance parties to the basic Winter Village at Bryant Park. Some of the suggestions are free, which suits college students, but others are upwards of $30 — the same price as the eight-pack you’re drinking. This seems a bit impractical for most consumers our age, but Dickens isn’t concerned.

However, Dickens also admitted that given the changing status of the pandemic, the events might not be a permanent feature of Bloc Collective. The drinks are yummy, for sure, but we’re not convinced the taste will be enough to offset the price, especially if the events are no longer part of the deal.

Bloc Collective is set to release a whiskey soda-inspired flavor in the next few months, and we would like to try it — just maybe not at the price of $3.75 per can.

Correction, Dec. 5: In a previous version of this article, we stated that one of the events was outdated and that the founder was not aware of it. The body of the article has been updated to reflect this correction and WSN regrets the error.