The Blossom in Chelsea relocated in mid-August, bringing its entirely vegan menu to University Place. Its outpost on Columbus Avenue is still kicking. 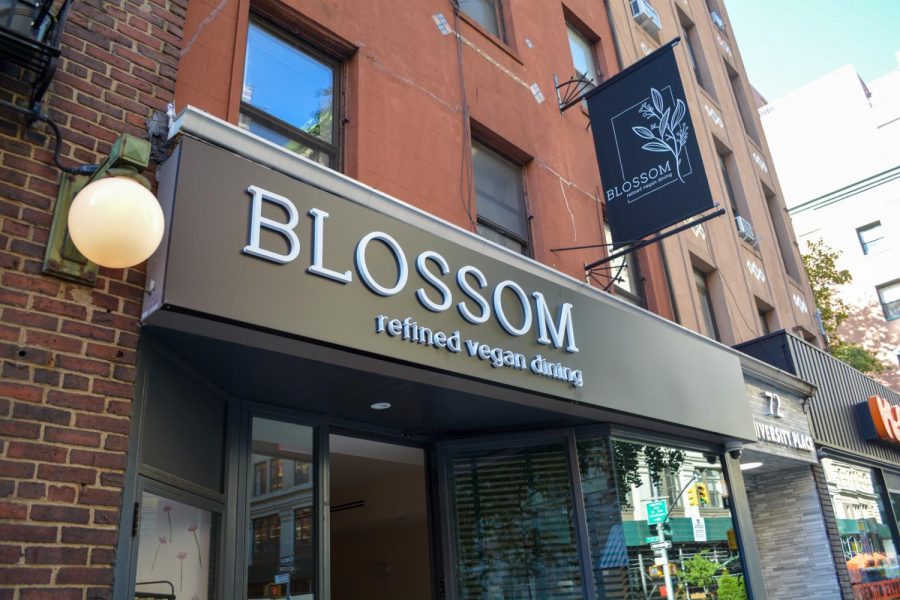 When I first dined at Blossom four years ago, it seemed too good to be true. I had only recently become vegan, but I had, for the most part, already conquered the challenge of eating out at regular restaurants. With my new diet, I was either only ordering sides or altering menu items so much that they were virtually unrecognizable. At Blossom, I didn’t have to do that.

Blossom is an entirely vegan restaurant group based in New York that serves various healthy dishes. After closing its Chelsea location, Blossom relocated to University Place and opened on Aug. 17 with delivery, takeout and outdoor dining options.

My dad, who was at first skeptical of my new diet, was the one who first made the reservation to Blossom during a day trip to the city. He was just as intrigued as I was to try the place.

I had decided beforehand that I would only order items I could not typically eat elsewhere, but this proved to be harder to narrow down than expected. There was everything from burgers to pasta to ice cream. With my diet, I was not used to being so overwhelmed by vegan options at a restaurant.

After one appetizer, my dad and I were too busy enjoying the food to even think about how they found substitutes for ingredients that seemed so integral to these meals. We knew we would be regulars.

Every dish tasted so unexpectedly delicious that I began to question whether or not they were actually vegan. Even I was surprised by how delicious vegan food could be. Suddenly, not being able to eat traditional burgers or cookies was much less daunting than it had previously seemed.

Since that first visit, Blossom has become one of my go-to restaurants in the city. My dad and I catch up over a buffalo arancini appetizer and have philosophical chats over warm tofu lasagna and a southern seitan sandwich.

After continually praising the restaurant around my friends, I finally decided to bring one of them with me to try it. She has a severe allergy to dairy, so I knew she would be excited to have pizza or nachos for the first time in years.

After eating foods she thought she would never have again, my friend immediately asked me when we would return. Though she knew her meal did not have dairy, she did not even realize it was entirely vegan. She just knew that it tasted delicious.

To this day, my friend and I still rave about their tiramisu. Every time we are in the city, we visit Blossom just to have it.

Some of my favorite days spent in the city ended with a meal from Blossom. Beyond the memories that come with eating their food, the restaurant also provides a health conscious meal that comes without harming animals.

They put as much care into the food as they put into uplifting a healthy, vegan lifestyle. From offering elderflower soda instead of Pepsi to decorating the walls with adorable pictures of animals, the passion can be felt from the moment one walks through the doors.

Now, after years of regularly dining at the restaurant, Blossom’s relocation only a couple blocks from NYU’s campus is a welcomed one. Though moving to a college campus brought many changes for me, I only have to walk a block away to find comfort in one of my favorite restaurants. For vegans and foodies alike, I hope the flavorful and memorable meals at Blossom become a staple of the neighborhood’s food scene.

Welcome to University Place, Blossom. Being in Greenwich Village is new for the both of us, but I’m happy to have you with me.