After operating out of the East Village for seven years, the Nugget Spot announced its permanent closure on Sept. 10. 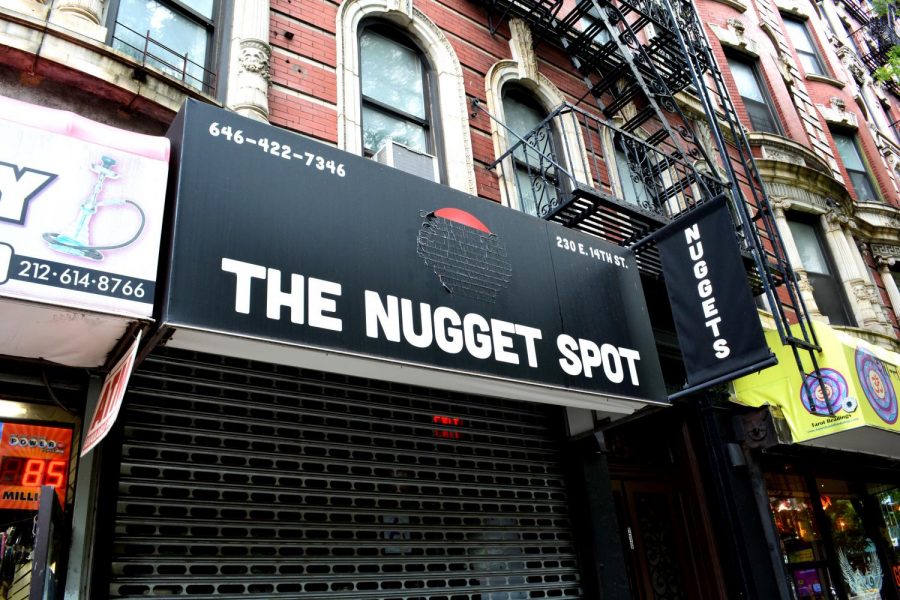 The Nugget Spot, previously located at 230 E 14th street, announced they were officially closing their doors for good. The restaurant will be remembered for its "Sriracha Nugs" and its reliability to keep patrons coming back. (Staff Photo by Manasa Gudavalli)

Almost two years after the fact, I still remember the searing, stabbing heartburn that came with my first box of Sriracha Nugs from The Nugget Spot. I was a first-semester sophomore working at WSN as a copy editor when someone brought in a box of those nuggets. Just the name of the order, “Sriracha Nugs,” was enough to pique my curiosity, let alone the aroma emanating from that brown box.

Immediately after my shift, I stopped by The Nugget Spot on 14th Street to pick up my own 10 count of Sriracha Nugs and gleefully made the 11-minute walk to my dorm in Gramercy Green. There, I sat on my bed and inhaled all 10 nuggets while watching “Hotel Transylvania 3” on my phone for the third time.

The chicken itself was fine. The spicy Sriracha seasoning did the majority of the heavy lifting, despite not actually tasting like Sriracha. Lucky for me, there was plenty of extra seasoning left at the bottom of the box that I downed like a strawberry-flavored Pixy Stix. Apparently, that was one step too far for the nugget gods, who cursed me with the worst heartburn I’ve experienced to date.

I curled up in a fetal position on my bed as the rest of “Hotel Transylvania 3” ran its course. The pain finally subsided two hours and one nap later. I took a long, cold shower and swore to myself I’d never return to The Nugget Spot again.

I don’t know what brought me back to The Nugget Spot one week later.

Perhaps, the nuggets contained some ineffable quality that made them so addicting. Maybe those nuggets and that spicy, spicy Sriracha seasoning finally presented a challenge for my iron stomach. Or maybe it was the MSG. It was probably the MSG.

Regardless, as I entered the exposed brick interior that housed those spicy nugs once again, I realized I was hooked. In the many times I returned over the next two years, I never ordered anything else.

A brown paper box of Sriracha Nugs was a common sight at the many treasured late nights I spent in WSN’s newsroom, the last of which happened weeks before The Nugget Spot announced they were closing their doors in March and donating over 800 pounds of nuggets through City Harvest. Had I known that evening in early March would be my last time eating there, I would’ve made sure it wasn’t.

The Nugget Spot reopened in June before closing again in the beginning of August. On September 10, The Nugget Spot announced on various social media platforms that their closure would be permanent, joining the estimated 2,800 small businesses in New York City that have closed their doors for good since March 1.

“For 7 years we called this home, making friends from all over the world that share the same love for NUGS,” their announcement reads. “We’re not throwing in the towel just yet, but in order for us to return in the future we have to take these necessary actions now.”

With a heart emoji and a promise to return sometime in the future, The Nugget Spot leaves 14th Street — and New York — a little less bright.

I can’t begin to imagine the pain of losing a restaurant for the staff or owners, but as a college senior staring down the barrel of graduation, this one hit home — a restaurant so deeply tied to the first half of my college career and the entirety of my time at this paper. It’s closure is a reminder that those days are gone, and unlike The Nugget Spot, there’s no chance of returning. At the end of the day, I wish I could’ve had one more meal there.

The Nugget Spot, I forgive you for giving me really bad heartburn. You will be missed.