Students are willing to brave buses and pay taxi fares in pursuit of traditional ingredients. 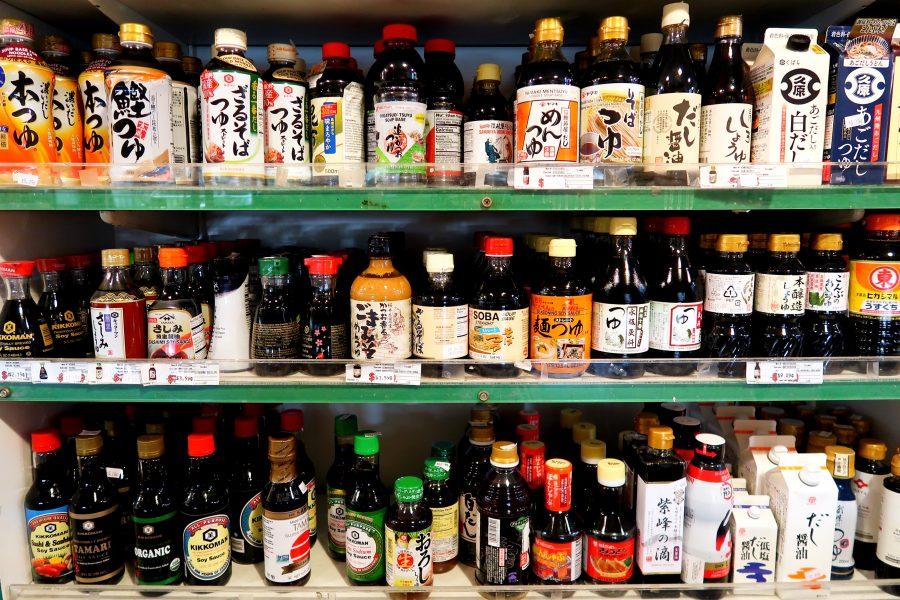 Japanese supermarket Sunrise Mart boasts a variety of soy sauces that are not found in typical American supermarkets. (Staff photo by Chelsea Li)

There’s nothing like a home-cooked meal — especially in college when microwave ramen has replaced mom’s cooking. Students at NYU have found that making the effort to cook traditional cultural dishes can help them feel more at home. But in order to do that, they first have to hunt down the ingredients.

“I grew up in Japan, so I cook Japanese food,” CAS sophomore Mai Nguyen said.

Nguyen shops at Sunrise Mart once or twice a semester to stock up on traditional Japanese seasonings and soy sauce. Sunrise Mart is a grocery store chain with nearby locations on Broome Street and Stuyvesant Street.

For the majority of students, however, finding authentic ingredients is a more difficult task.

When CAS sophomore Fabiha Khan wants to cook food from her culture, she heads to Apna Bazaar in Queens.

“For Bengali things, you have no options,” Khan said. “Go to Jackson Heights, and pray that the uncles and aunties will take mercy on you.”

“I kind of have a ‘spice plug,’ if you will,” Tandanpolie said.

Since last year, one of the Public Safety officers at Third Avenue North Residence Hall has been bringing Tandanpolie curry powder, jerk seasoning and other Jamaican groceries from Richmond Hill, Queens, where she lives.

“We made a connection, and I asked her where I could find Jamaican food once last year, and she was like, ‘Oh, don’t worry about it, I can get it for you,’” Tandanpolie said.

All three students find a sense of community in cooking foods from their heritage. For instance, Khan’s family has been going to Haat Bazaar in Jackson Heights for 26 years, so she can chat with the store owners who know her well.

Even in New York City, buying traditional ingredients and cooking at home can be the safest bet to achieve an authentic meal.

“I know there are some restaurants where I went and then I ate and was like, ‘Oh, this is pretty authentic.’ But literally, I can count it on one hand,” said Nguyen.

These restaurants are to be treasured because when there’s a sense of home, there is often a feeling of identity. It’s all the better when those feelings are cultivated in one’s own kitchen.

“My blood is made of soy sauce, so I can’t go without that. That’s me,” said Nguyen.

New York City is famous for its diversity, so NYU students may never feel too far from home. Though it takes time, effort and a culinary mistake or two to make culturally authentic foods, these students would assure you that it’s worth it.

“[Cooking] makes me feel like my heritage is in my hands,” Tandanpolie said. “I think especially because I don’t have family around me, having the connection through the food is like the closest thing to a hug I can get.”