Amid protests prior to the runway, South Asian New York Fashion Week pays homage to South Asian heritage through design. 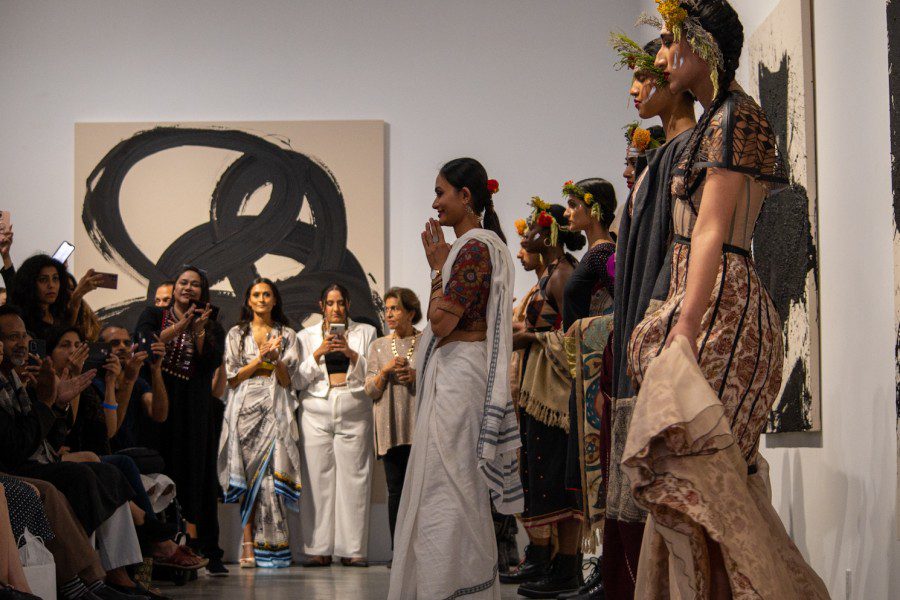 Pleated cottons, flowy chiffons and lightweight silks — mainstays of South Asian fashion — were carefully draped on models as they got ready to close out the first-ever South Asian New York Fashion Week. Fittingly titled “The Future of Fashion,” South Asian NYFW’s closing runway at the High Line Nine Gallery on Sept. 14 featured an array of South Asia’s finest designs, some of which also included Western influences.

Shipra Sharma, founder and CEO of South Asian NYFW, pitched the idea of a South Asian-inclusive event to COO Hetal Patel after seeing another Fashion Week show featuring a skirt and blouse set that culturally appropriated a lehenga choli — a three-piece skirt, blouse and scarf. Indeed, my own senior prom in 2019 had many students wearing these new prom dresses cut in the exact styles of lehengas.

“It was the year where the ‘cohort sets’ became popular,” Sharma said. “I turned to one of my press colleagues next to me, and I was like, ‘Wait, that’s a lehenga.’ And she’s like ‘Wait, what is that?’ and I was like, ‘What? that’s what design is’ and I think the origins and the stories of our designs have been lost and they haven’t been told and I think this is the generation that is going to tell our stories proudly to the whole world.”

The runway wasn’t without controversy. Activists outside held signs against the glass windows facing into the gallery before it began. Shazia Ilmi — a spokesperson for the Bharatiya Janata Party, the right-wing political party which controls India’s government — spoke at the closing runway advertising the New York edition of the Jaipur Literature Festival. Calling Ilmi a “genocide apologist,” the protesters retaliated against a controversial citizenship law passed by the Indian government in 2019.

“We know that the boycott is against a few people in this room,” Sanjoy Roy, a Jaipur Literature Festival official, said. “We know that a few weeks ago here, there was a horrific incident against a writer, Salman Rushdie … They have a right to protest as long as they do so without violence. That’s all we ask.”

The controversial speaker soon left the stage, and with her, the protesters too. House music blasted from the venue’s sound system, and the runway opened.

Designer Nikita Shah unveiled her brand Untitle by Nikita, a sustainable label that upcycles deadstock fabric which doesn’t get sold in India. Block printing, a process by which a hand-cut block of wood is used to imprint designs on fabric, was a common feature of Shah’s sarees. Two distinctive textiles, Kalamkari and Ajrakh, from the Indian states of Andhra Pradesh and Gujarat, then hit the runway. The sarees were hand-painted with a bamboo pen and naturally dyed.

“With upcycling becoming so cool, it’s something that’s so deeply rooted in the South Asian culture,” Shah said. “That’s something that I’ve seen my grandmum do, our ancestors do — to take leftover sarees and make blankets out of them.”

Designer Naseer Khan debuted his brand Aazadi — meaning freedom in Urdu and Persian — with beige-fit block print of Kashmiri paisley motifs in black, and the brand’s name in the Urdu alphabet, on both his sweatshirts and sweatpants. The audience, which included the founder of the nonprofit Indiaspora, M.R. Rangaswami, turned to each other in awe of the digitally designed block-printed peacock on the back of one cream-colored sweatshirt. The duality in design and form somehow felt representative of the fusion of South Asian and American identities.

“I’m really proud to see the evolution of our next generation taking center stage in New York and the United States,” Rangaswami said. “How they adapted to the West but still maintain our culture, you can see that in every clothing.”

Aks Mathur, a Seattle-based premium hand-craft leather brand, creates art on bags instead of slapping on branded logos like other luxury companies. Models wore all black to draw the audience’s focus to their leather bags. As someone who loves traveling, I was mesmerized by the latest collection, KÄRÅ, inspired by designer Aks Mathur’s memories of traveling to new places and the absence of those experiences due to COVID-19. (Mathur also presented at Flying Solo in 2021.)

The intricate craftsmanship is evident in the crossbody SONAR, which, with its charming hand-painted motifs, reflects the stone wall carvings of the historic Jaisalmer fort in Rajasthan, India. Mathur also looked to nature, referencing the colors of crashing tides in the ENSŌ tote and the tranquility found in the Valley of Flowers in Uttarakhand, India, in the bag Paradisus.

Sana Ali Khan is the founder and designer of Aara By Sana, a luxury womenswear line designed in New York City and manufactured internationally. Her garments are influenced by her dual identities — being half Indian and half Pakistani.

“My first job when I was 13 years old was at a fabric store, and that’s really where I fell in love with textiles,” Khan said. “I was just talking to my husband about Balenciaga and the nose chain. I think in the next coming years, you’re gonna see a lot more of this brown movement happening.”

Aara by Sana presented conversation-starters. Khan — who’s known for her blazers and her juxtapositions of black and white — featured one white leather blazer mixed with an unexpected combination of sustainable silk, delicate chiffon and beading paired with a dhoti — a loincloth traditionally worn by men. A pleated black dress and a white crop top with mirror work were reminiscent of the clothes I wore as a little girl to festivals.

Although Chief Marketing Officer Noopur Luthra said that South Asian NYFW aimed to highlight the fact that the South Asia region is not just India or Pakistan, but also countries such as Sri Lanka, Bangladesh and Nepal, this particular show I attended did not include labels from countries other than India and Pakistan.

Based in Karachi, Pakistan, designer and brand Nomi Ansari closed the show with eclectic samples ranging from kurtas and salwars with digital art print patterns to grandiose lehengas and kurtas in golds and cerulean blues. The clothes sparkled with every movement the models took down the runway.

“It was a lot of pressure on me because I was the only one from Pakistan,” Ansari said. “The continent has a lot to offer in terms of colors, in terms of patterns, in terms of embroidery and that’s what we’re known for.”

When asked about the protests, Ansari asked that everyone respect each other.

“Respect every religion, and never bring your race or religion into your friendship, relationships, at work, everything,” Ansari said. “Treat humans like humans.”