Catholic iconography has taken over the fashion world, embracing both tradition and modernity. 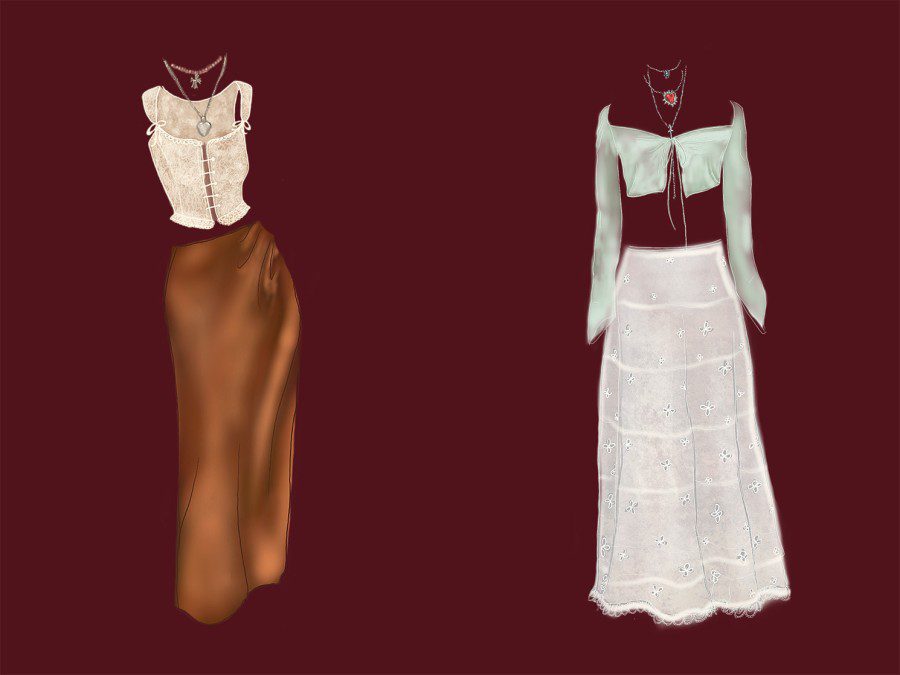 The resurgence of Catholic iconography in fashion has reintroduced long skirts and crosses into outfits. (Illustration by Jenna Sharaf)

Our generation goes through trends more often than socks get lost in the washing machine. We’ve seen the comeback of low-waisted jeans and micro-miniskirts from the early 2000s, pink ballet flats from our childhood, wide-leg trousers from the ‘90s and loafers — which I used to be embarrassed to be seen wearing anywhere outside my high school. While I’d like to say I can see trends coming from a mile away, the rise of Catholic core was one that caught me completely by surprise.

From the colorful rosaries and gold crucifixes at the Greenwich Village weekend street fair to faux Chrome Hearts maltese cross rings in Chinatown, Catholic imagery in fashion can be seen on almost every corner in Manhattan. Even the Dana Foley store on Ludlow Street sells reworked vintage slip dresses with screen-printed images of Mother Mary, complete with blinged-out tears falling down her face.

Although religious iconography — specifically the crucifix — has been popular on Tumblr with the grungy crowd for as long as I can remember, this aesthetic seemed to have been both reborn and baptized in 2018 on fashion’s biggest night: the Met Gala. 2018’s theme was “Heavenly Bodies: Fashion and the Catholic Imagination.” Adorned in pearls and crystals, Rihanna wore full papal regalia by Maison Margiela. Jesus look-alike Jared Leto was dressed by Gucci and wore a stole decorated with ornate floral patterns of gold, pink and green. Ariana Grande wore a breathtaking Vera Wang gown that depicted Michelangelo’s art from the Sistine Chapel.

While many looks from the 2018 carpet were revered, some questioned the sudden rise in Catholic imagery in modern fashion. LS sophomore Olivia Olson spoke about her initial mixed feelings toward the Met Gala’s theme as a student who was attending an all-girls Catholic school at the time.

“I thought many of the attendees looked stunning, but it was so strange to see aspects of a religion that held so much regularity in my life translated into a star-studded red carpet event,” Olson said. “Now that I’ve had more time to sit with the theme and I am no longer as tethered to the Catholic Church, I appreciate the beauty and celebration of grandeur that Catholic imagery has.”

Only a year later, in January of 2019, Kanye West started his famous “Sunday Service,”  series of gatherings for music and prayer. At the first performance, West and a gospel group sang choir versions of his most popular songs, including music from his 2019 gospel album, “Jesus Is King.” West’s “Sunday Service” events were notoriously difficult to get into, as they were private and invite-only. The only way to view the activity of these cult-like gatherings was through pictures or videos, illuminating the key factor in the re-popularization of Christianity and Catholicism: exclusivity. Every Sunday, I found myself watching the Kardashians’ and Jenners’ Instagram stories for clips of the performances, celebrities and outfits.

Within the same year, the brand Praying was launched by Alexander Haddad and Skylar Newman. Known for their iconic “God’s Favorite” purse and cheeky “Holy Trinity” bikini, Praying gained widespread popularity among influencers and celebrities like Rosalía and Olivia Rodrigo, further spreading the Catholic core aesthetic.

However, there’s a huge juxtaposition seen in the trend today. Yes, some brands are fully pulling out the lace veils and long nun-like skirts, but more frequently, traditional Catholic relics are paired with not-so-conservative clothing or jewelry such as Lana Del Rey’s coke necklace, which was being resold for as much as $1,200. Do brands adopting what’s commonly referred to on TikTok as the Catholic Mexican girl aesthetic hold real Catholic sentiment, or are they simply posing to keep up with the trends?

Marcelo Gaia, founder of the brand Mirror Palais, received backlash for his new clothing line in regard to this question. One comment on his TikTok read, “Aren’t you also responsible for adding to the ‘Catholic Mexican girl aesthetic’ that now white women are using to fit [their] Eurocentric beauty [standards]?”

Gaia responded with a TikTok to the comment discussing his relationship with the collection, which was photographed in San Miguel.

“I’ve really had enough when it comes to this discourse on Mirror Palais and the Catholic Mexican girl aesthetic,” Gaia said. “I am Brazilian. Brazil is a devout Catholic country. My mom and my dad, but mostly my mom, is an extremely religious Catholic woman. I went to a Catholic school growing up … [the collection] was inspired by my culture. It was inspired by ‘Gabriela,’ by Sônia Braga in the film ‘Gabriella.’ It was inspired by Rita Hayworth in ‘Gilda.’ It was not inspired, by any means, by Mexico specifically.”

As the debate around Catholic core and the secularization of sacred objects continues, I still find myself on edge about the trend of making traditionally holy pieces modernized and edgy. While I was first ready to dig through my mom’s old jewelry box for crucifix necklaces and scroll on eBay for red rosaries, I’m now questioning whether it is true that this trend can simply be sacrilegious and controversial?

Maybe the fashion industry is subconsciously repenting for its sins, which includes the production of Shein and Amazon dupes of small business designs. Maybe the fashion pendulum has swung back to a more conservative aesthetic after last year’s long and sunny hot girl summer. Or maybe we are just following trends like disciples, looking for the next best thing to worship.