Through the looking-hat: What we as a society can learn from hats

My journey from hattraction to hatdiction to hatving no more puns to put in this description. 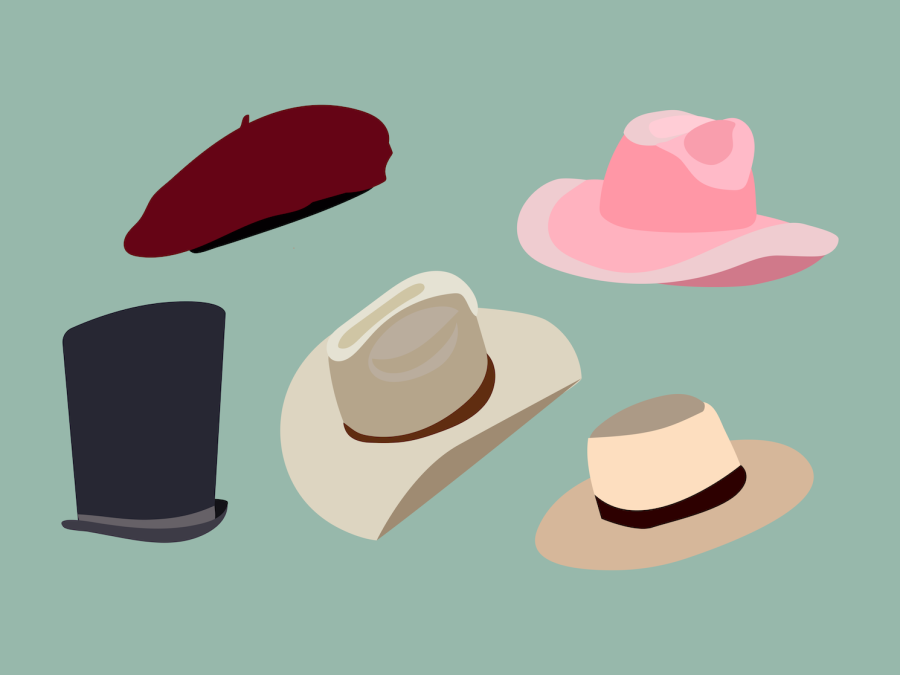 Max Tiefer is a normal human being rather than a sentient hat rack. (Staff Illustration by Susan Behrends Valenzuela)

You all read the headline. You know what I’m about. Yes, for the past semester, I have embodied that most loathsome of college archetypes — second only to the fiscal conservative and the dean who gives a dance performance instead of a tuition refund: the hat guy. Depending on various everyday factors such as weather, mood, ease of access, fluctuations in the value of the Euro and whether Neptune is currently in alignment with the International Space Station, I don an Irish drinking cap, a fedora, a fez, a communist beret, a general’s cap, a cowboy hat, a tricorn, a chef hat — now deceased due to a foray into community theater — a top hat, or a couple of other hats that aren’t remarkable enough to warrant using more of my precious word count on them. I have stacked, swapped and shared these hats, and even started an unpromising acting career solely on the basis of my head being more adorned than the average NYU student’s.

In a testament to the supreme indifference of New Yorkers, my classmates have long since ceased questioning my headpieces, and I have been allowed to participate in society as if I were a normal human being rather than a sentient hat rack. Their acceptance has made me question some of the fundamental assumptions our society has about hat people. Perhaps those who wear hats and those who do not can coexist in harmony, without need for judgment. After all, if we can become accustomed to the flaccidity of the Daily Screener, a dean who speaks in British and Columbia University, then surely headwear shouldn’t be where we draw the line.

Of course, I’m not naïve — centuries of ingrained prejudice will not disappear overnight. As an NYU history minor, I am all too familiar with the lengthy and gruesome sequence of events that resulted in our modern stigma against hatmanship. It began with Napoleon, whose penchant for flamboyant hats became speciously associated with his authoritarianism, elitism and France’s so-called language — things that few other hat wearers actually possess. The fact that I speak French is merely coincidental. Over the following generations, resentment accumulated toward hats and their wearers, prompting hatters to gradually shift away from ostentation in the hopes that smaller designs might not attract as much disdain. The gargantuan top hat of Abraham Lincoln became the practical cowboy hat of the Wild West, which in turn became the understated fedora of the 1950s. Each successive trend was slightly more shriveled than the one that preceded it, until the counterculture movement did away with hats altogether.

We now live in a world that has fewer hats than ever before. Wearing hats in public is an anomaly, like employed Tisch students or cheap New York real estate. But I believe the time is finally right, not just for this stigma to end, but for hats to return to the mainstream. Decades of hats being culturally absent has dulled society’s enmity towards those of covered head — a discovery proven by the fact that I have been a hat person for months and have only been punched during that time for unrelated reasons. As such, the zeitgeist is ripe for our streets to once again become glutted with hat-wearing individuals. If everyone who owns a hat starts wearing it routinely, the novelty — and the irregularity — will disappear, and the American people can once again normalize wearing things on our heads the way we wear things on the rest of our bodies.

I’d like to conclude this entreaty by talking about spaghetti. I’m a lifelong believer in the idea that everything can be explained through pasta — history is a long, curvy, but unbroken noodle, love is a lasagna, and so on. A person without a hat is like a spaghetti with no sauce or cheese: tasteless, mundane and forgettable. Those who seize control of their sartorial destiny, who use the scalp as their canvas, those people are choosing to be spaghetti with sauce. What specific topping they choose is irrelevant — unless they’re one of those sadists who uses balsamic vinaigrette — so long as they choose something. Because right now, our world is dry, bland and desperately in need of a condiment.

As noted word-arranger Catherynne M. Valente once said, “Hats can change you into someone else.” Why not change yourself into someone who wears hats?