Dior’s legacy is alive and well at the Brooklyn Museum

The Brooklyn Museum’s “Christian Dior: Designer of Dreams” exhibit is a well-curated look back on the iconic fashion house and the influences that have shaped it over the years. 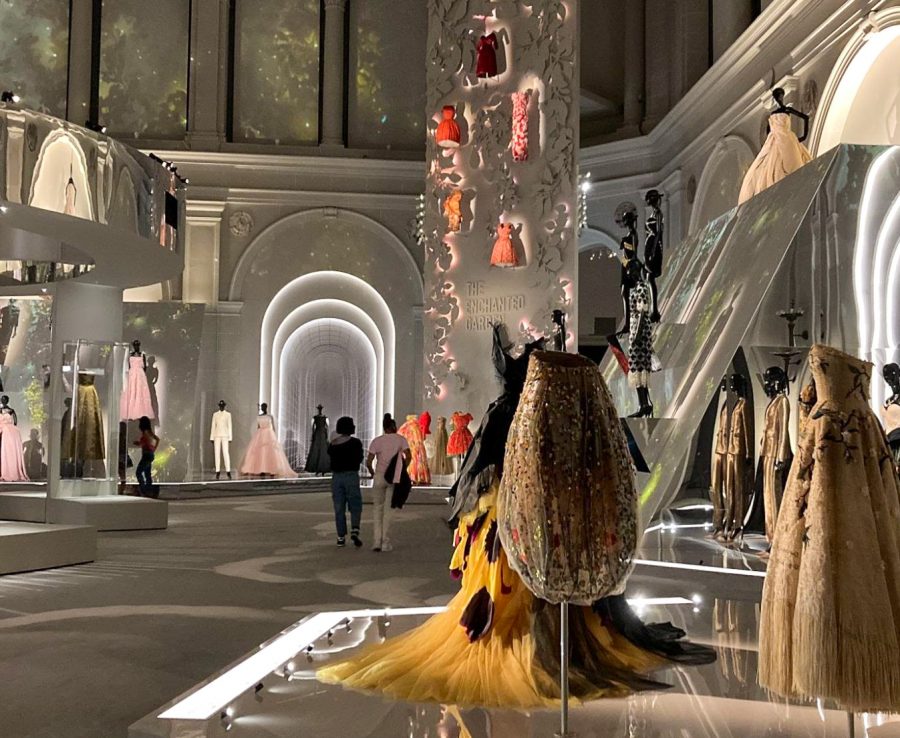 The Brooklyn Museum’s newest exhibit “Christian Dior: Designer of Dreams,” opened on Sept. 10. The current collections preserve the essence of Dior by balancing history with modernity. (Photo by Vivian Stockley)

Dior. The name evokes mid-century elegance and the dramatic nipped waists and flared skirts of the New Look silhouette that founder Christian Dior pioneered in the ’40s and ’50s.

Since Dior’s death in 1957, the fashion company’s leadership has changed many times. After the varying influences of so many different designers, does Dior’s modern style align with the founder’s original vision for the brand?

The Brooklyn Museum’s newest exhibit, “Christian Dior: Designer of Dreams,” which opened on Sept. 10, attempts to answer this question. The exhibit provides a comprehensive retrospective on the French fashion house’s designs from its conception in 1946 to its present-day incarnation under creative director Maria Grazia Chiuri.

The key to this exhibit is in its curation. Curators Florence Müller and Matthew Yokobosky designed an exhibit that embodies the company’s founder and presents audiences with an understanding of Dior’s success.

The exhibit begins in a relatively simple gray gallery. However, the information and pieces presented here are crucial to our understanding of the most foundational, basic elements of the Dior legacy.

On display are pieces exemplifying Dior’s original New Look silhouette: elegant in their tailored simplicity and executed in classic solid colors. The party dresses and wool skirt suits are timeless and unpretentious. Next to them hangs a cloudy blue-gray painting by Frederick Childe Hassam of a wintry New York afternoon.

On the gallery wall is the story of the influential Christian Dior, who revolutionized women’s fashion following the fabric shortages of World War II. His voluminous, longer skirts crafted with plenty of fabric were the antithesis of minimal wartime fashion.

Despite Christian Dior’s current success, his pieces were once the center of debate. His New Look pieces received backlash since many women disliked their longer length, having grown accustomed to shorter dresses and skirts as a result of the rationing of fabric during World War II. A particularly absurd photo shows women protesting Dior, carrying slogans reading “Mr. Dior, We Abhor Dresses to the Floor” and “Little-Below the Knee Club of Chicago”.

Next, the exhibit turns its attention to the various creative directors that have redefined Dior in the years since the death of its founder. Viewers are led through Marc Bohan’s colorful, flawlessly tailored designs, Gianfranco Ferré’s glitzy, ostentatious pieces, flanked by florid Italianate marble columns, and John Galliano’s extravagant, ornate, historically inspired creations.

Most recent are Maria Grazia Chiuri’s contributions: shimmering, flowing garments that are feminine and strong. The curators place her designs next to an art piece by Chiuri’s frequent inspiration, feminist artist Judy Chicago. The textile collection asks the question, “What If Women Ruled the World?” and was used in the runway show for Dior’s spring/summer 2020 Haute Couture collection. The multicolored banners display questions such as, “Would God Be Female?” and “Would There Be Violence?” Chiuri’s nod to feminist art is especially significant as the house’s first female creative director.

While the exhibit takes time to showcase the varying visions and influences that different designers have brought to Dior, its main goal is to find the common threads that have persisted in Dior designs over the years.

One source of inspiration that Dior creative directors have consistently come back to is historical fashion. The house of Dior, the exhibit shows us, has a talent for turning old styles into contemporary trends. Galliano had his many Rococo and ancient Egyptian-inspired dresses, Ferré created his famous “Column Dress,” an empire-waist dress that evokes the Regency era but, more obviously, is made to look like an ancient Greek column.

Most recently, Chiuri designed several brocaded Renaissance-inspired pieces for the spring/summer 2021 collection, mirroring the era’s sumptuous paintings. And of course, over the years, many nods have been made to the original New Look silhouette. Another notable allusion to Dior’s legacy is a gray early 20th century-inspired Galliano dress that pays homage to Dior’s mother, Madeleine.

Located between the exhibit’s eclectic mix of rooms is a long hallway decorated with elaborate Rococo-inspired wallpaper and antique paintings. White neoclassical columns stand among a wide range of pieces, all from different eras of Dior that emulate the opulence and ornate elegance of the 18th century.

The next room is mirrored and colored a dazzling white, representing the workshops where every Dior piece begins. The immaculate white room highlights the clean, precise crafting that goes into each garment at the Dior ateliers. We come closer to the core of what makes Dior special: the pure, clean simplicity and elegance at the foundation of every garment dating back to its New Look origins.

The center of the exhibit is a massive room called “A Ball in the Enchanted Garden.” In this beautifully presented scene, visitors are immersed in the essence of Dior. The room is divided into multiple thematic categories. However, they all still circle back to the central idea of an enchanted garden masquerade. The curated mini collections draw from all eras of Dior, proof of the enduring thematic cohesion between its collections over the years.

Some dresses sparkle and shine, while others are bright and floral. Some have flared 1950s skirts and some sleeker 1990s silhouettes. However, the overall mood of the room is unified: it is hushed, magical and glamorous.

A label describes Christian Dior’s childhood love for gardens and nature, as well as his lifelong belief in superstition, including his use of lucky charms and belief in fortune tellers. These motifs remind us of the founder’s enduring presence in the legend surrounding the House of Dior and its continued use of nature, mystery and superstition as inspiration. It directs us to the Chiuri designs in the center of the room and their zodiac sign and constellation influences.

The exhibit’s final room provides another example of the enduring legacy of Dior: the fashion house’s reputation as designer for the stars. This relationship with celebrities is instrumental to Dior’s essence and image.

In a darkened room, seemingly illuminated by a starry night sky, a platform displays countless red carpet gowns, along with matching photos of Hollywood’s biggest stars, such as Nicole Kidman, wearing them.

As the exhibit comes to a close, we can reflect on our initial question: what is the core meaning of Dior, and do the house’s current designs live up to its iconic origins?

Over the decades, Dior’s designers have looked back to the past and paid homage to their founder’s legacy, reworking old ideas into modern ones, and creating cohesiveness throughout various collections. A foundation of solid craftsmanship lies beneath all the inspiration and styling, which gives the clothing the ultra-classic Dior feel: clean, well-executed and elegant.