This First Year Multidisciplinary Artist Does It All

Liv Solomon tattoos in her free time, along with photography, film, visual art and modeling. 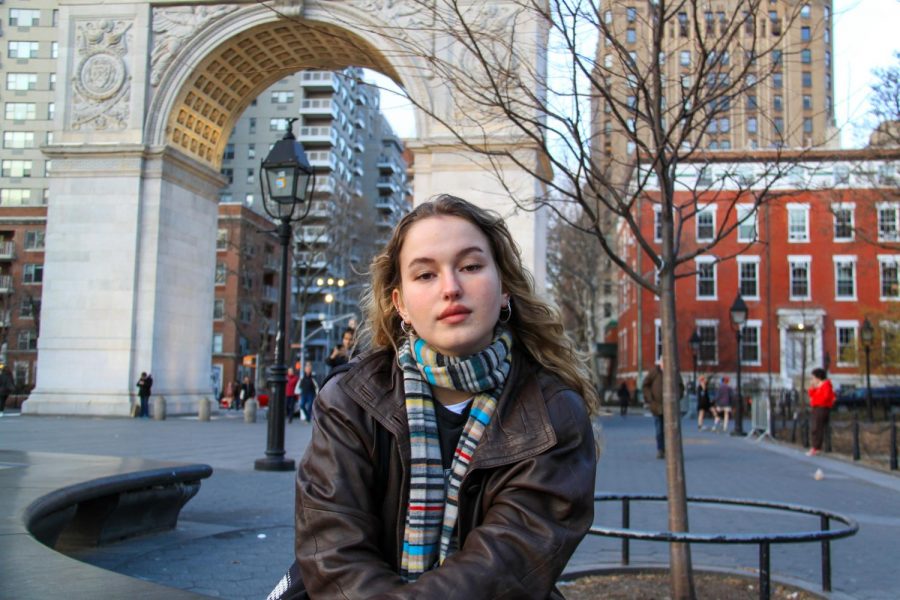 A quick glance at Gallatin first-year Liv Solomon’s Instagram tells you all you need to know about the depth of her artistic talent. Her pages, @livsolomon and @livmarked, are filled with fascinating portraits, expressive drawings and unique tattoos that she has personally designed. On top of that, she has also modeled for the likes of Calvin Klein, New York Magazine and Parade Underwear.

Solomon’s artistic journey started well before she was a full-time student balancing a part-time gig as a tattoo artist and model. Originally working with photography in her hometown of Los Angeles, Solomon moved to New York City for high school. She explained that “naturally, photography came as a gateway to apply to school” in New York.

Surrounded by other artistic students, Solomon immediately found herself inspired while taking art classes. Additionally, her high school offered an entire month where students are able to focus on extracurricular activities. Solomon took advantage of that to form a photo project on her friends’ personal expression through fashion.

Solomon’s main inspiration for all of her work stems from individual expression and identity, as she says that “photography and film were the only way I could express myself properly.” While we talked, she constantly referenced her fascination with her friends, self-expression and capturing someone’s personality in a photo, film or drawing.

Never satisfied with just one outlet of expression, Solomon wanted to pursue other disciplines aside from photography. Her next choice was film, partially inspired by one of her favorite directors — David Lynch. Solomon found that film allowed her to expand her interest in expression and identity as she directed music videos for close friends’ songs.

Along with film, Solomon also started to expand her passion for drawing and painting thanks to her friends’ support.

“Drawing became more than a habit to keep me distracted,” Solomon said.

Her friends and family were always fascinated and intrigued by her work, which motivated her to draw even more.

As she continued to work with visual art, she took art classes and used a lot of her work in her portfolio when applying to college. Solomon knew she wanted to go to a school that offered art, but felt like Gallatin’s individualized program would be the best fit.

“I needed to go to Gallatin when I realized that I’m so fascinated with so much other stuff,” Solomon said.

Solomon plans on combining art classes with media, politics, identity and gender studies to interpose her work in our contemporary world. Her ultimate goal is to form a focus around identity expression and performativity. Like many Gallatin students, she feels grateful for the freedom that Gallatin provides her in her studies.

At NYU, Solomon might be best known for the numerous tattoos she’s done. Maybe you’ve seen her tattoo account on instagram, where she posts flash sheets and completed work. It’s also the best way to contact her about getting a tattoo done.

Solomon’s interest in tattooing started when she got her zodiac sign tattooed on her ankle. That first tattoo unlocked a world of unique artists, styles and new forms of expression. As Solomon’s interest in visual art merged with her fascination with tattoo artists, numerous friends and family members encouraged her to start tattooing her own designs.

Once she found herself surrounded by an entirely new community at NYU, Solomon realized the potential for her newfound passion. After buying a tattoo gun and the necessary supplies, she set out to start practicing the craft.

“As I learned more about tattooing, I realized it’s something that I can totally do,” Solomon said. “I’m making money, I’m doing something that I love and my job right now is to literally give something to someone else. That’s so cool, holy sh-t!”

Her love for tattooing has inspired her to one day open her own shop, where she hopes to emphasize a personal relationship with each of her clients.

Solomon’s excitement for all of her art is obvious, and anyone who meets her will instantly feel her infectious personality and driven attitude. It’s that personal and friendly approach that has led her to grow her Instagram page to a sizable following, from which she’s been able to grow her tattoo page and work with brands.

Most of Solomon’s modeling jobs have come from work with close friends.

“I got to be a part of this really awesome project that a bunch of my friends were in,” Solomon said.

The project she’s referring to is a shoot done for Calvin Klein’s 50th anniversary, no simple achievement. Solomon explained that the rest of the jobs she’s gotten are through Instagram, modeling for brands like Teeth Magazine, Parade and Adidas.

“I’m just lucky enough to be surrounded by creative people who want me to be a part of their work,” she said.

Despite her recent work, Solomon hasn’t fully accepted modeling as her new path.

“I know I can’t be in that world and be happy,” Solomon said.

She attributes most of her modeling work to the friendships she’s made, and mostly focuses on expressing herself through all of the other artistic outlets she’s developed over the years.

Regardless of the route Solomon chooses to take after NYU, her passion and bubbling personality will carry her far. She’s already demonstrated her unique ability to forge friendships and apply them in creative spheres. For those looking to see more of her work, check out her Instagram.

A version of this article appears in the Monday, March 9, 2020, print edition. Email Alex Christiano at [email protected]