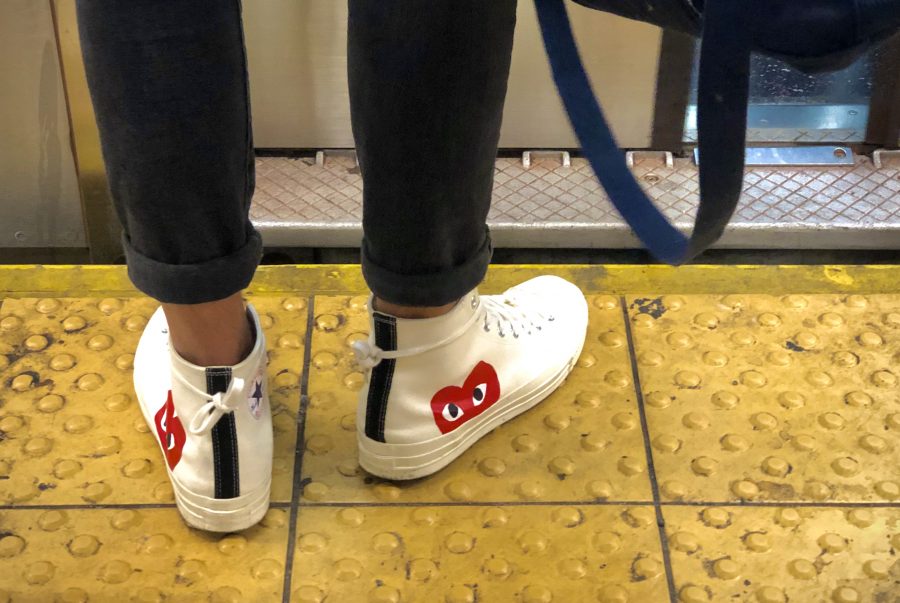 The simplistic design of Comme des Garçons Converse was a great trend four years ago. (Staff Photo by Jorene He)

Few colleges or universities can claim the fashion culture that NYU can. Whether I want to admit it or not, it was a small but contributing factor in my decision to attend. I genuinely enjoy eyeing the street style of students while walking to class and spotting some real gems. Special shoutout to the guy in the Stern building at 11 a.m. on Mondays and Wednesdays that wears structured blazers with his Balenciagas.

With such fierce competition, it can be difficult to maintain an individual style. Too often, trying to stay on trend can lead to copying others to the point of exhaustion and sometimes, these trends don’t even make sense. Below is a list of trends that, according to one guy’s irrelevant opinion, have seen their share of overuse or inexplicable popularity.

Off-White Graphic Tees
I’m not going to trash Off-White in the way that many self-proclaimed fashion critics seem to, since it’s not a hot take nor one I agree with. Virgil Abloh has had his share of innovations. His label has been credited with everything from bringing utilitarian irony back into fashion to establishing Helvetica Neue as the dominant typeface in design circles. His designs haven’t come without some missteps, however. His signature products are his graphic tees, many of them logo-adorned and less than spectacular. It is not a fashion statement to put on an ill-fitting t-shirt plastered with some gaudy arrows or diagonal lines. This is literally the same thing we endured during the Abercrombie & Fitch graphic tee era, only at a luxury price point. Save yourself the money.

Comme des Garçons Converse
Four years ago, this trend was great. I even considered buying a pair myself. They were an affordable way to buy into the CDG play brand, regardless of their simplistic design. A Saturday night, Brooklyn-bound L train has at least one pair in every car. It’s statistics. It is a trend that needs to pass not only for its overuse, but its uninteresting design. The shoes really aren’t anything more than an all-white ’70s Chuck Taylor shoe with the CDG heart logo screen printed on the side. And no, I don’t think the rubberized toe cap counts as design.

Alexander McQueen Oversized Sneaker
These are the official footwear of every Tribeca mom, most often paired with a smoothie and an Equinox membership. I guess these fall into the bulky sneaker trend, which I don’t have a problem with per se. I respect your average Balenciaga Triple S and love my own Raf Simons Ozweego, the shoes at the origin of the entire trend. One problem with these is that they are not even that chunky. Their only defining feature and the one that loosely places them into the category are their bloated rubber soles. Beyond this, they are an unremarkable leather sneaker that is just stamped with the McQueen logo. The late McQueen himself would definitely not be pleased. They lack the macabre avant-garde spirit of his designs and come off as a cash grab. If it were not for the branding, these shoes would fit in perfectly at Zara with their generic silhouette. For something identical, shop at an actual Zara instead.

A version of this article appears in the Monday, Nov. 4, 2019, print edition. Email Chad Evans at [email protected]