How junior Hannah Tribolet defies many of the standards associated with a modeling career. 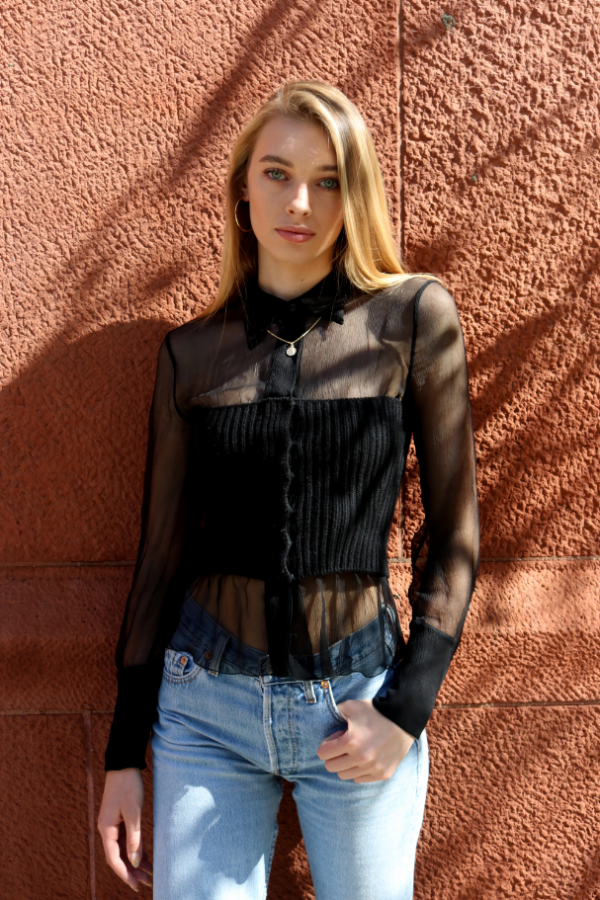 Hannah Tribolet, Gallatin junior, a young model recently moved from Los Angeles to New York. After developing her modeling career in London for two months, she returned to America and transfered to NYU. (Photo by Talia Barton)

Gallatin junior Hannah Tribolet is not your average student, but she’s also not your average model. The 20-year-old is signed with LA Models and recently moved from Los Angeles to New York, but managed to avoid New York Fashion Week.

“I have no time for that,” Tribolet said. “They need you to keep your entire schedule open for them and with it being the beginning of school it is just too much. I would have to find a new agency right now, and it’s incredibly difficult to get started in a new city.”

Tribolet began her modeling career in high school. She commuted frequently to open castings in LA until she signed with her agency. She graduated high school early, but like many students, Tribolet was unsure what she wanted to do with her life. She decided to focus on modeling, and at 18, she moved to London by herself for two months in order to develop her career and connections.

While in London, Tribolet went to five castings a day, meeting with casting directors and designers. The time commitment was extremely demanding, but she ultimately scored a prom campaign for fashion brand Pretty Little Thing, and has since worked with Brandy Melville, Vince, Oscar de la Renta and Nordstrom.

She also deepened her love for thrift shopping and developed a passion for sustainable fashion.

“I have always been a huge thrifter,” Tribolet said. “I would go to thrift stores growing up instead of the mall because I loved finding unique clothing pieces that no one else has. I have a secret talent for it, and it’s the best feeling finding a special piece and giving it a new home.”

On top of modeling and thrifting, Tribolet took online classes at West Los Angeles College while abroad — a difficult task due to the time difference. However, she said she’s well aware that modeling will not sustain her forever, and she felt it was important she continued her studies.

“I’m in an industry where you are looked at for how you look, so to be in school and have a backup is very important to me,” Tribolet said. “Many girls go into modeling and want to do it forever, but then have no back up or any sort of formal education after it.”

Upon returning to the U.S., Tribolet began to consider applying to university. NYU was a school she considered applying to when she was a high school senior, so naturally, it was still a top contender.

Tribolet’s mentor, the head of the runway division, wrote her a letter of recommendation, and now the young model has transferred and is studying sustainable fashion, business and entrepreneurship in Gallatin.

“I’m mostly going to school to learn for my future business, not for a degree, because I don’t really want to work for anyone else but myself,” Tribolet said. “I want to possibly create a store that is similar to Reformation Vintage in LA or What Goes Around Comes Around in NYC.”

Right now, Tribolet is focused on transitioning to NYU, and has not been modeling, though she plans to resume it once she settles into city life and adjusts to her classes.

“It is definitely going to be a lot more difficult modeling while having a full course load, but I think once I find consistent clients like I did in LA, I will be okay,” she said.

Balancing school and work life aren’t the only things that make modeling difficult for Tribolet. She often finds she has to prove herself and defy the stereotypes surrounding the industry.

“I feel like a lot of them are true,” Tribolet said. “I know a lot of girls struggling with eating disorders and many take drugs and get mixed up into things they shouldn’t be mixed up in. I have really been avoiding that scene. I couldn’t focus on my career or school living that lifestyle.”

She admits it is a lot of pressure and says she has been told to both lose and gain weight for jobs. However, she says she mostly tries to ignore what others think about her.

“I keep myself in tip-top shape, but I don’t feel the need to change my measurements by inches,” she said. “I have learned over time to just be yourself, and you can succeed.”