Gallatin Designers Bring Dreams to Life on the Runway 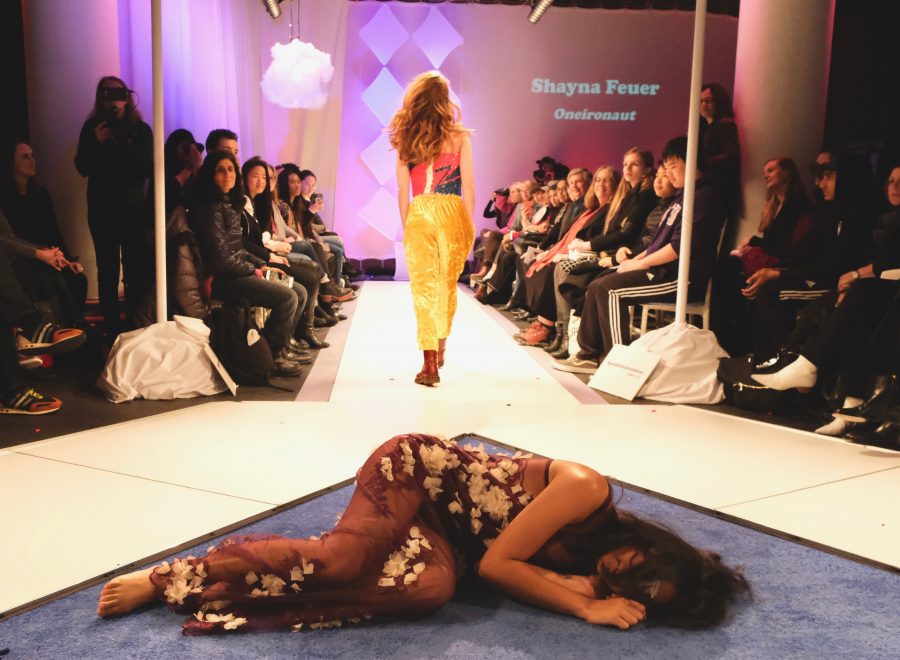 During the "Oneirornaut" showcase by Shayna Feuer, a model mimes sleeping. (Photo by Jorene He)

Audience members dove into the subconscious of the Gallatin School of Individualized Study’s designers during this year’s Gallatin Fashion Show: Dreams and Dreamscapes. The show featured everything from satin evening gowns to red plaid skater dresses. After brief opening remarks by Gallatin alumna Colby Jordan and a discussion by archaeologist and Assistant Professor Karen Holmberg, the presentation of the dreamy collections commenced.

Overcast
The show kicked off with a collection designed by first-year duo Lauren and Stephanie Kirshenbaum. Motivated by a desire to bring seemingly unachievable and distant dreams down to earth, the Kirshenbaums utilized a soft color scheme of whites, baby pinks, barely-there blues, pastel purples and soft greens. One standout look juxtaposed a geometric off-white top with a pure white cloud-like skirt, capturing the spirit of bringing dreams together with reality.

Dreamt of Flying Bear
Rachel Wang, a Gallatin alumna, was inspired by the ancient Chinese proverb, “Dreamt of Flying Bear.” According to the show program, “dreaming of the bear is a sign that one is about to meet the most crucial character in one’s history.” Wang fused comfortable sleepwear with elegant evening wear to create clothing made for both beauty sleep and changing the world. However, the appearance of red flannel as an accessory and later as a skater dress was jarring in an otherwise overwhelmingly neutral collection.

An Ode to Arizona
Alumna Madeline Dolgin celebrated the beauty of her dreamscape and home state of Arizona in a collection filled with whimsical cacti and colorful embroidery. Many of the pieces included designs evocative of the sky, from bright midday to eye-catching sunset to a bewitching night sky.

The White T-Shirt Project
Students of Professor Louise Harpman’s “Good Design” course simultaneously explored the “range of cultural meaning ascribed to the color white” and transformed plain white T-shirts into tops that demonstrated assigned design principles. For example, senior Audrey Burt successfully illustrated imbalance by removing all but the collar and sleeve from half of the shirt and reattaching it on the bottom of the other side. Leaving the collar and sleeve allowed the top to maintain its original silhouette despite the fabric displacement. The diverse nature of the resulting pieces suggested that plain white T-shirts may not be so plain after all.

Amouricana
When sophomore Sanjula Singh heard the theme for this year’s show, she instantly knew that she wished to explore the American Dream. The classic red, white and blue took on another layer of meaning in her collection as the fabrics were brought together “from different lands and pieced together to represent the diversity of the United States,” according to the program. The most eye-catching piece was a white cape onto which the names of Native American tribes were written using fabric and paint, a puzzling addition that needed further context.

Oneironaut
Oneironaut, or a traveler of dreams, was the word of inspiration for alumna Shayna Feuer’s collection. Feuer’s was the most performative of the displays; the first model walked down the runway wrapped in a sheer floral nightgown and sleeping mask before proceeding to lie down and fall into a deep sleep at the end of the runway for the remainder of the show. The other models strutted down the runway and around her in an eclectic display that included gold, crushed velvet pants, a black hoodie and a satin nightgown. While conceptually and aesthetically interesting, there was a vexing lack of a cohesive color palette.

“And the Rest” –  Original Song
Instead of a clothing collection, NYU alumna Mackenzie Leighton provided the audience with a break from fashion in the form of an original song and video clips of her dreamscape, Paris. According to her video introduction, she had written the song about her new neighbors in Paris after her post-graduation move to the French capital.

Mother
Inspired by her dance with God, during which she was able to eradicate her victim mentality after years of childhood abuse and trauma, junior Selly Djap designed three exquisite dresses constructed with sheer, flowing fabrics. The three models danced en pointe slowly as though they were in a dream-like state in an ethereal unveiling of the collection.

Dream Days
Junior Sophia Merlino focused on the present for her collection. According to the program, Merlino designed her pieces to “[represent] our ability to make our fantasies into a reality, through being present in this dream day.” However, the multifarious collection failed to clearly demonstrate her concept.

The Tangible Ethereal: Transformative Events
Sophomore Joy Kim’s collection sought to evoke audience members’ memories of dreams. Kim incorporated flowy fabrics and rich blues, pinks and yellows in her pieces. The most compelling piece was a deep blue dress with a high slit on the right side that sparkled and flowed effortlessly as the model floated down the runway.

Witching Hour
The models for alumnus Victor Leonard’s collection strutted to an eerie rendition of  “Silent Night” as they wore pieces inspired by Leonard’s experiences of sleep paralysis. The white looks that bookended his segment of the show were elegant and alluring, but the red and black pieces in between truly embodied the haunting nature of nighttime immobility.

Post-Earth
For her collection, Anna Kathleen Croom designed clothing that befitted the futuristic world she imagined in which humans live in harmony with the world around them. Trendy utilitarian elements and denim ran rampant throughout the overwhelmingly beige lineup.

Liminal Space – Colors on the Horizon
With the horizon as her dreamscape and muse, senior Elizabeth Bellotti captured the sky as the sun moves throughout the day. Bellotti fused fine art and fashion through her use of silk painting and dip-dying to create exquisite fabrics that seemed to have been cut from the sky itself.

Head in the Clouds
The last collection was designed by first-year Madeline DeJong. The white, gold, blue and silver satin pieces were simultaneously bold and unassuming, depending not on flashy prints or gaudy design but on their delicate color palettes and impeccable tailoring. The final look was an elegant one-shoulder gown with a patchwork of the collection’s colors that achieved her goal to encapsulate the imagined experience of floating on a cloud.

A version of this article appears in the Monday, March 11, 2019, print edition. Email Carol Lee at [email protected]