After a two-year hiatus due to COVID-19, the Violet Gala and Ball are back, Bobst transformation and all. 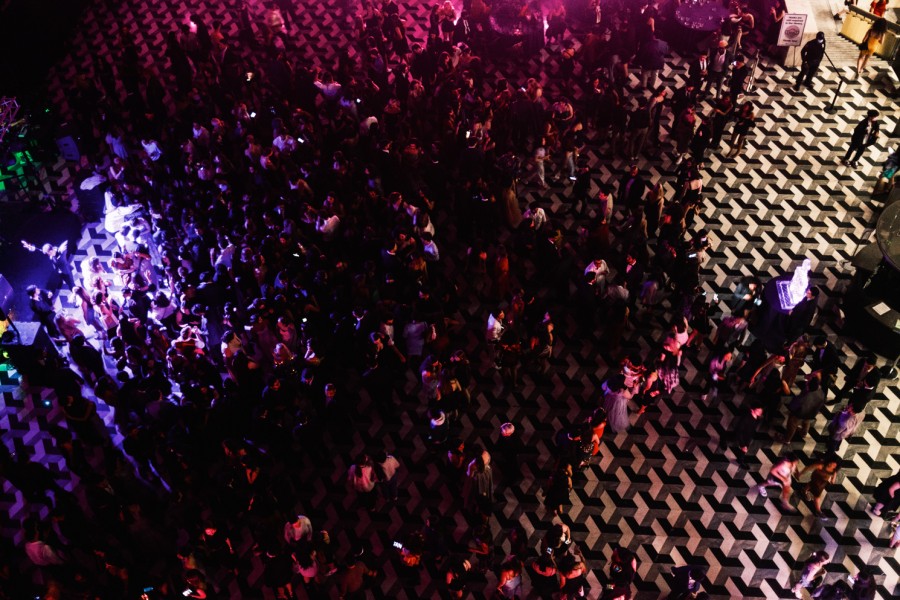 Nearly 300 students were seated inside a tent in the middle of Gould Plaza on Saturday night. Most were dressed in their best suits, cocktail dresses or floor-length gowns. This was the Violet Gala. Meanwhile, the Bobst lobby was being transformed into a dance floor for the Violet Ball.

For the lucky few who were able to attend the Violet Gala, the provided dinner far exceeded expectations. In a city where a glass of wine can be $10, a three-course meal and two free drinks for the same price is absolutely unheard of. But the Gala delivered exactly that. The ambiance was pleasant with ongoing chattering, impromptu birthday celebrations and a tinge of wine-drunkenness.

However, with the Gala seating enough for only 0.5% of the university’s student body, backlash arose as quickly as the tickets sold out.

“We maxed out, I think, maximum occupancy is 340 — 300 seats plus staff, so we really pushed every limit,” All-University Events Committee Chair, recently elected student government chairperson and CAS junior Ron Hall said. “And that’s why we wanted the Ball to be something where we can have 1,000 or so people, but not charge ticket prices.”

In previous years, there was only the Violet Ball in Bobst, where catering and drinks were included with a $20 ticket purchase. This year, the events were separated, with the gala dinner preceding the dance. So, if they were on the RSVP list, attendees headed over to Bobst to dance the night away.

After entering, I found myself wandering around, a bit lost, navigating through crowds of dancing people, the too-long photo booth line and past the ice sculpture. The DJ played a mix of wedding music (“the Macarena,” “Livin’ on a Prayer”), ironic meme music (an “All-Star” trap remix I would love to unhear) and also some amazing karaoke throwbacks (“The Sweet Escape” and “Promiscuous”). “I Love It” was somehow directly transitioned into “Come On Eileen,” “Gangsta’s Paradise” unsuccessfully mashed with “Peaches.”

Attendees initially milled around awkwardly, dancing or, more accurately, swaying to the beat in their formal wear. It was exactly as I’d remembered prom, but this time I could actually see clearly. The vibe was identical.

Eventually, I wandered down into LL1 for the coat check. What I didn’t expect was the fairly large group of people sitting in study rooms and by computers doing work. Exactly how were people studying while bass-boosted versions of “Bohemian Rhapsody” and “Firework” were blasting above them? They concentrated on their work, seemingly unfazed by everyone outside the window.

SPS graduate student Claudia Diaz, who normally works on the upper floors, was unaware of the Violet Ball until arriving earlier that day but was not particularly bothered by the music or events upstairs.

“I’ve been having my headphones in for the most part,” Diaz said. “I know there are some people that might be really mad about the noise, but it doesn’t really affect me.”

Like many parties, the energy didn’t pick up until later in the evening. Smaller mosh pits overlapped, becoming larger, indistinguishable groups jumping to the beat. As the majority of people got excited, it felt like there was something to celebrate and dance to. For some, it was graduation; for others, a moment of peace before finals kick in. Whatever the energy was, it was relieving — freeing.

With both an RSVP list of 1,000 people and a separate waitlist completely full, students were also discontent about the limited availability of tickets.

“How did all the tickets and waitlist spots go so quickly 💀,” Tandon sophomore Courtney Chan commented on Instagram.

After two years without these in-person celebrations, the Violet Gala and Ball were great ways to restart pre-existing traditions, but only for the fraction who were able to attend. If you couldn’t go this year, I’d recommend trying to attend at least once before you graduate — it’ll make Bobst feel slightly less miserable.