Struggling with beauty standards while growing up Black 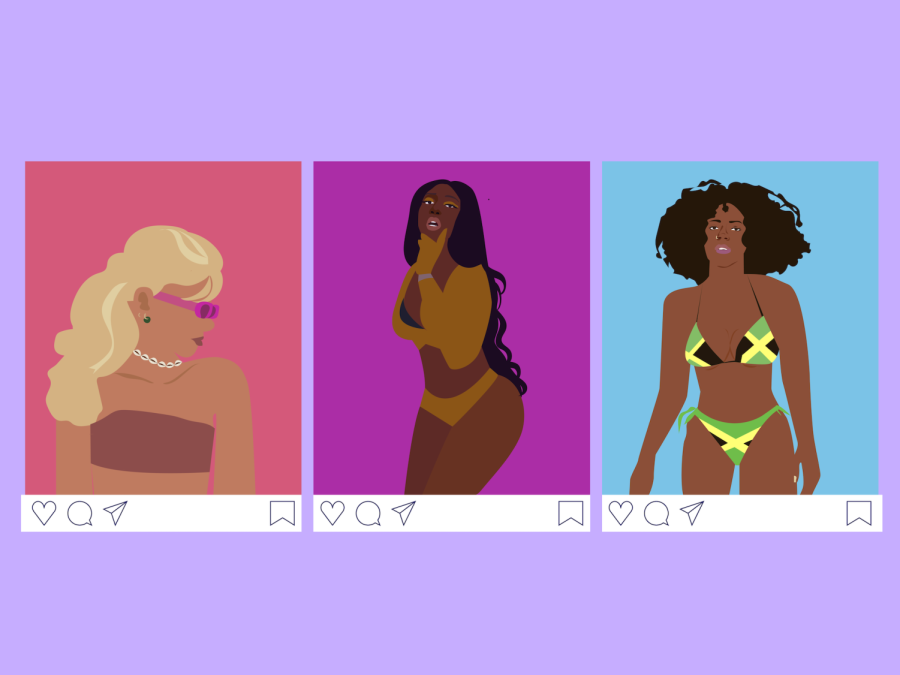 Beauty standards are heavily dependent on cultural context. People’s insecurities may extend far beyond themselves as they question how they are representing their culture. (Staff Illustration by Susan Behrends Valenzuela)

Beauty is contextual and temporal. I, being Afro-Caribbean, have endlessly struggled with that interpretation. Caribbean beauty standards. Black American, particularly Southern, beauty standards. Mainstream American beauty standards. On their own, they are near-impossible landscapes to traverse. Taken as a whole, I feel locked out of them entirely.

When I was younger, I thought I could choose. At first, I aspired to the one that I saw the most — the mainstream American standard of beauty.

In 2010, skinny blonde women with blue eyes and summer tans seemed to always be put on a pedestal. I spent a lot of time wondering how I could fit into this beauty standard. I tried to mold myself like clay. If I poked and prodded at my dark brown skin, perhaps it would turn into a Panama City Beach tan. If I stared at my eyes for long enough, perhaps I could turn them into turquoise pebbles. I was skinny, but the skinny on me was not the same as the skinny on them. I didn’t understand.

Then the mainstream American beauty standard managed to shift without making progress; even when blondes became brunettes, skinny became curvy-adjacent (but not fat), and tan became quite dark, eyes still remained blue, noses still straight and button-like. Mainstream American culture likes to adopt elements from other beauty standards over the years, such as when the Kardashians were praised for their adoption of body types, facial features and hairstyles typically seen in Black beauty standards. The generic American beauty standard skewed to these appropriated trends for a bit before returning to their fatphobic and white-praising status quo.

When I was younger, I wanted lighter skin. In 2013, I watched YouTube videos of women showing me how to mix turmeric, honey and lemon for brighter skin. “Brighter” was an easier word to swallow than lighter; “brightening” was more digestible than bleaching. So I consumed both with ease and used these kitchen concoctions with hope and excitement.

Then I’d pray, “God, when I wake up, please make me lighter. Please make me prettier. Then, they’ll like me.”

I’d wake up and cry. Nothing had changed.

On YouTube, girls my age raved about apetamin for giving them boobs and a butt. They told me about the combination of apetamin and Ensure Plus doing wonders, making them slim-thick. At the time, I really wanted to be slim-thick. I still do.

Apart from the beauty standards imposed on me by Pan-American media, I was influenced by something else: the Caribbean expectation of beauty. The Caribbean is host to many ethnicities, and with that there’s varied interpretations. For some, it’s the image of a dark, supple-skinned beauty with wide hips, large breasts, a round behind and a small waist. There’s also the image of the ethnically ambiguous but still vaguely Black curly-haired beauty who can have the figure of the aforementioned woman or be traditionally thin. The first image represents pride in African heritage and features commonly associated with Black women. The latter represents the reality of colorism.

I watched this standard from a distance and with a skewed vantage point. I looked at the beauty standard and contrasted it with my mother, my grandmother and my aunts. All of them had grown up within said beauty standard; all of them dieted and watched their weight. One of my aunts bleached her skin heavily and had relaxed hair for the majority of her life. My grandma often remarked on the long, soft, loose-textured hair and clear skin she had in her youth. My mom was silent. She often longed for the thinness of her body before pregnancy, but never told me how she felt about her highly-textured hair and dark skin. My mother likes to joke about her and her friends needing BBLs so they could compete with the younger women for male attention. She often complained about her butt being too flat. She wore Spanx and tummy-control underwear every time she went for a night out.

Closer to home and the Afro-Caribbean beauty standard was Black Southern beauty. Growing up in the South for a majority of my life, it was all around me, although it took me a while to notice.  Aesthetically, this beauty standard overlapped with those of the non-colorist Afro-Caribbean beauty standards. Even then, Black Southern silhouettes make seemingly impossible curves feel too beautiful to be so natural. “A body only grits, cornbread and collard greens could make,” people would say. But for these Black Southern women, their grace, their kindness and their fierceness were trademarked. These powerful curvy women with their long flowing hair and glowing skin reflect the values of Black Southern culture — no matter who you are or what you’re going through, hold on tight to your spirit, dignity and beauty. With the likes of Beyoncé, Megan Thee Stallion and Normani, Black Southern beauties finally took their place on the global stage. Sometimes I exaggerate my barely existent Southern accent in hopes of sounding like them. I try to be more gracious while holding firmly to my boundaries. But there was just one problem: my body looks nothing like theirs.

Beauty standards cut like a double-edged blade. All beauty standards uphold white supremacy in some way. Instead of embracing other features that do not fit into idealized body types, Black women are homogenized and oversimplified.

The result is the fetishization and hypervisibility of those women who fit into those standards. They’re reduced to mere images while the person behind them fades. The women who fit outside of those standards are erased unless they decide they want to become slaves to this homogenization. For some it feels like a do-or-die situation; they either undergo potentially deadly surgical procedures that cost thousands of dollars, or forfeit societal acceptance.

I’ve left it to the imagination. Too often, I have found myself daydreaming about what life could be like if I fit perfectly into any standard. I imagined awards, bouquets and applause. I dreamed that the world would open up for me and that I would finally feel at peace. I could travel the world, I could even find a beauty standard that I fit into perfectly.

Now, that image comes and goes, but not as often. With all those years passed, and so much peace and joy taken away from me, I don’t think that a socialized image of beauty can give me anything.