Food activism: taking food justice into your own hands

The "Zoom in on Food Activism" panel, part of NYU's MLK Week celebration, aimed to involve students in food activism. 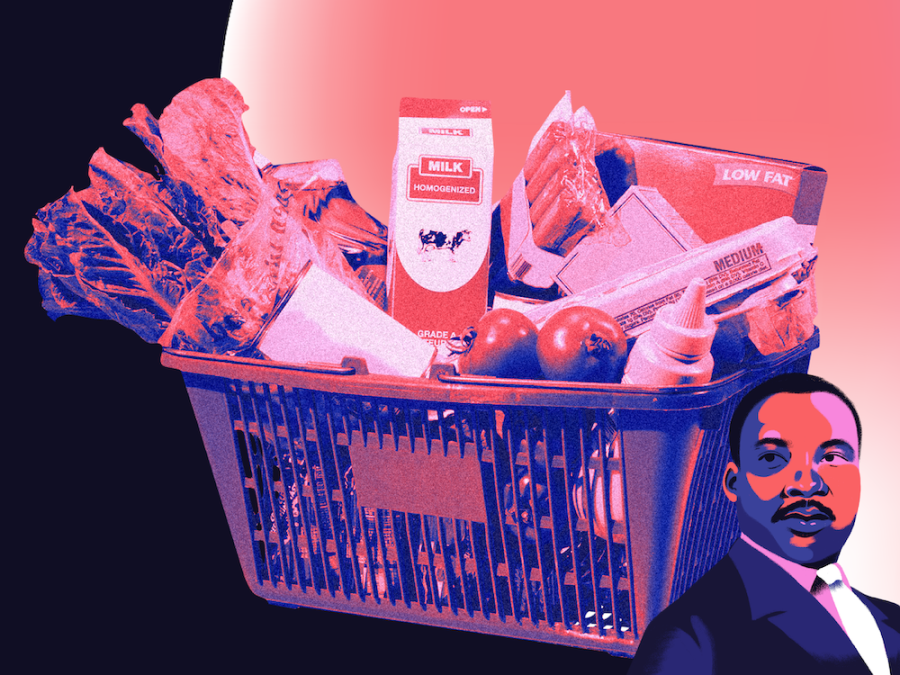 Dr. Martin Luther King Jr.’s words and ideas have spread far beyond the U.S. Civil Rights movement. NYU hosted its 17th annual MLK Week last week, theorizing what a changed world consistent with King’s teachings might look like. Focusing on one such facet, “Zoom in on Food Activism” — a virtual panel hosted by NYU Service and the Center for Student Life on Feb. 12 — discussed redesigning U.S. food systems in order to provide everyone with equitable and adequate nourishment.

CAS sophomore Michaela Greenlee moderated the panel and began by asking Kemi Mugo, an environmental educator at the Mountain School, what food systems are. She outlined how a food system includes planting, cultivating, harvesting, marketing, selling and consuming.

“A system is made up of parts, and all the relative processes that move those parts,” Mugo said. “Cultivation is key, because it’s what happens to the land and the people.”

“It’s not just, ‘Are you getting enough calories?’” Mugo said. “It should be, ‘Is your food nourishing you?’ More often than not the answer is no.”

David Sugarman, an NYU Gallatin professor and co-founder of the Minetta Creek Collective, added that our food system is extraordinarily good at producing waste, with the average New York City household producing approximately 8.4 pounds of food waste per week. Maura Puscheck, a Steinhardt alum, was inspired to co-found the Collective by a 2019 New York Times article that demonstrated food insecurity’s drastic prevalence at colleges.

“I read a very disturbing article in the New York Times about food insecurity on college campuses,” Puscheck told WSN. “There was a line — it was about an NYU student who was ‘delirious [from] hunger.’ It deeply struck me.”

While NYU has programs such as Swipe it Forward, Courtesy Meals and Share Meals, these initiatives have not been sufficient to combat food insecurity among its students, as WSN previously reported. Since the onset of the pandemic, food insecurity in New York City has increased by 36%.

During the panel, Puscheck referenced a fall 2019 survey of NYU students conducted by the nutrition programs of the School of Global Public Health and the Steinhardt School of Culture, Education, and Human Development. 41% of the 257 respondents reported that they suffered from food insecurity.

Minetta Creek Collective was founded in 2019 as an NYU History Department project where Puscheck and colleague Chelsea Rhodes set up a table laden with snack food for ease of accessibility to any students who might be going hungry. The two then combined forces with Sugarman. Since fall 2021, the Minetta Creek Collective has been serving the Washington Square Park community with free food and events.

The panelists agreed that the culture we live in encourages us to waste food or sell it, rather than share it. Mugo believes the biggest sustainability improvement to our food systems would be respecting the land and listening.

“[Improving] requires dignity and respect for the plants and animals who grew and gave their lives to feed us,” Mugo said. “To waste that is disrespectful.”

California’s new system of disposing food waste could be useful for New York to emulate in collaboration with nonprofits like the Collective. On Jan. 1, 2022, Senate Bill 1383 went into effect, requiring California residents to separate organic waste — food waste — from nonorganic waste. The composting project aims to reduce the state’s organic waste disposal by 75% by 2025.

Mugo emphasized that any solution to the problem of food waste must take into account the intrinsic link between food insecurity and poverty.

“If you can’t afford transit to food,” Mugo said, “or a healthy choice of foods … or you don’t have the time, money will fix that.”

Food insecurity is tied to systemic poverty: Getting the nourishment you need is one of the first steps of breaking out of the poverty cycle. Mugo provided a list of resources to help college students begin the fight against poverty: A Foodie’s Guide to Capitalism, Freedom Farmers, Farming While Black and the podcast Heritage Radio Network. Shannon Rush, an NYU program administrator and the panel’s organizer, included a resource guide for getting involved with volunteering.

“What needs to change is what we think food insecurity looks like,” Sugarman said. “What we think it looks like affects what we do in turn to combat it.”

While MLK Week is something largely associated with antiracist activism, poverty’s systemic effect on communities of color shows how the two are interconnected. I myself have decided to start volunteering, based solely on how this panel showed me the extent of food insecurity in New York.