Turning your home screen into your feed with the Locket app

With pictures that show up directly on the home screen from your nearest and dearest, Locket redefines intimacy and privacy. 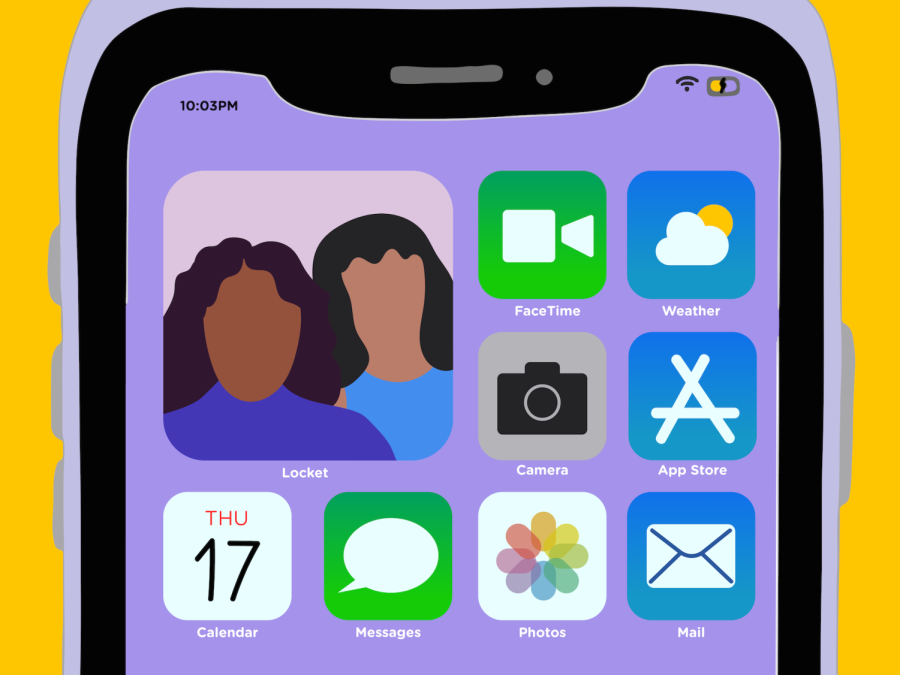 Locket, which debuted on Dec. 30 of last year, is an app exclusively for iOS users that has since been well received. (Staff Illustration by Susan Behrends Valenzuela)

Locket, the app that went viral on TikTok in the beginning of January, now ranks among the top free apps on the Apple app store. It works by using the iOS widget feature — by adding your friends via their phone numbers, you can then take and share pictures that will appear on the home screens of their iPhones.

My friends and I downloaded Locket during winter break and have been using it ever since. We all thought Locket would be a fun way to send pictures and show each other what we’d been up to during the break. The app is most comparable to Snapchat, but unlike Snapchat, where the photos quickly disappear, users are able to access previous photos shared in an archive.

Locket seamlessly integrates with the widget system, streamlining social media and allowing for easy communication between friends without advertisements getting in the way. Notably, there is also no option to follow people who are not in your contacts list — this makes the app more intimate, blocking off strangers and influencers who are often trying to sell unnecessary items, or promoting lifestyles that are unattainable for the average person.

The app does have some drawbacks and limitations when it comes to adding friends. When it first launched, users could only add up to five friends. The app has since expanded the number of friends allowed to 10, which is arguably still too small a circle for anyone wishing to add both their friends and family. The app is only available on iOS devices, making it impossible to share photos through the platform with people who do not use iPhones.

Despite the fun and intimate nature of Locket, I found that once I got used to it on my home screen I forgot to click on it and upload my own photos for my friends to see. After the novelty wore off, my friends and I were using Locket a lot less than we were when we first downloaded it. And as the excitement dissipated, the issue of privacy became more noticeable — uniqueness aside, Locket is still a social media application that hides concerning user agreement clauses behind a harmless appearance.

Locket is a creative idea for a social media platform. The widget format plus the lack of ads or discover page allow users to seamlessly send pictures to friends without the hassle of social media interferences such as ads, algorithms and explore pages. The app has been very enjoyable for me and I highly recommend downloading it and trying it out with friends.