Black students are demanding for more representation among NYU Tisch faculty and staff as they struggle to reveal their work with their non-Black peers and professors. 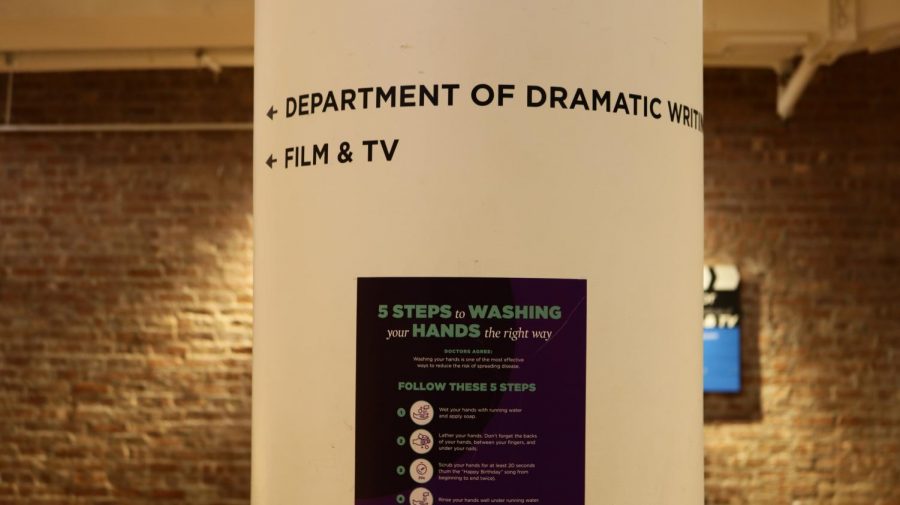 The Rita and Burton Goldberg Department of Dramatic Writing is located on the seventh floor in the Tisch building. Black students struggle with cultural appropriation and the lack of Black representation in their writing classes. (Staff Photo by Shaina Ahmed)

Stories are extensions of our cultures and our deepest selves — allowing others to read and critique your writing is a vulnerable experience. Screenwriting workshops at NYU strengthen scripts through critique, which is a challenge for any writer. Black students have the added challenge of communicating their experiences to white audiences who likely do not understand or relate.

My most memorable table read was of a script I wrote about lesbian Black Panther. When a student commented that my script would resonate with political activists, my white professor quickly asserted that my script was not political — it was a universal romance. As a heated debate about my intention arose without room for me to defend my script’s political message, I felt frustration and embarrassment. I was made to feel as if the story I had so carefully constructed had been set aflame.

Nearly one year later, I haven’t been able to forget this moment — and neither can other students, such as Nifemi Adegboye, a senior studying Film & Television at Tisch School of the Arts. As a Black student, Adegboye has had similar experiences in screenwriting classes.

“A lot of my scripts use a lot of Atlanta slang and a lot of jokes specific to the Black experience, and they kind of dead them,” Adegboye said. “When I’m writing my scripts and I want to write the way that I talk or write the way that I hear people in my life talk, I have to dumb it down to make it more palatable for the class because there are just certain jokes that they won’t understand and won’t try to understand.”

For Adegboye, language is crucial, but it creates an impasse with her non-Black peers.

“If I want to use the N-word, sometimes that’s a very pivotal part of the line and it makes it funny, and [non-Black students and professors] literally can’t say that,” Adegboye said. “I feel like my work isn’t getting the critique or the advice that it needs because they don’t know how to interpret it.”

Adegboye’s experiences demonstrate that storytelling must be a practice in reciprocity — nurtured not only through the writer’s ability to tell, but also the audience’s ability to listen and respond. Black writers are often forced to tell their stories to audiences who don’t understand, which robs their narratives of the active engagement they need.

“When I studied acting, the phrase that came up before beginning a monologue was, ‘Don’t cast your pearls before swine,” Jackson said. “Those words echo in my head constantly … [it takes] a nerve-wracking level of vulnerability to share a story to a group of people that simply can’t read AAVE with eloquence, attempt subtle and bad accents, imagine the characters as white [and] mispronounce names. It feels like erasure and voluntary humiliation.”

When non-Black professors and students lack the tools to respond to scripts written by Black writers, they fail to respect those writers. While these misunderstandings may be innocent mistakes for non-Black people, microaggressions — such as mispronunciations and failed attempts at speaking AAVE — are manifestations of a culture that treats deviations from white standards as trivial. Since classrooms are often the first place students receive feedback on their writing, Black stories need to receive classroom support to flourish.

Creating a safe environment for Black students in screenwriting courses is a complicated problem with no easy solution. Faculty and Black students have argued that diversifying classrooms and teaching cultural sensitivity would help build a more inclusive academic environment. These strategies are worth evaluating as a starting point for establishing screenwriting courses that feel like home for all students — not just white ones.

Diversity isn’t just about the identities of the students in a given classroom; it means actively creating clubs, mentorship programs and courses by and for Black students. For example, Tisch already has resources for students of color: such as FOCUS, a student organization that provides support for filmmakers of color, and courses about Black cinema such as The Black Image in Cinema and Modern Social Impact Filmmaking. Adegboye argues that these are noteworthy starting points, but this work must be continued through the hiring of a more diverse faculty.

“I think the biggest [solution] would be hiring more professors of color,” Adegboye said. “I have had exactly two professors of color that I would say that I’ve really connected to, and both of them are some of the most inspiring people that I’ve met at Tisch, because they put attention and care [for] Black stories and they understand them.”

Professors of color, especially Black professors, can support Black students in the classroom through shared cultural understanding. Understanding is the springboard for inspiration — a writer’s most valuable resource. Professor Shatima Jones, a sociology professor at the Gallatin School of Individualized Study, reflected on her experience as a Black instructor at NYU.

“As a Black woman, I come from a working-class background,” Jones said. “I’m a first-generation college graduate. I bring those things into the classroom, and it resonates with students … I see myself in them. And I think they see themselves in me.”

Professors like Jones are valuable role models for Black students. Ezra Sacks, the chair of Undergraduate Film & Television at Tisch, emphasized the importance of hiring more people of color.

“I’ve been extremely concerned and aware of diversifying our faculty since I took over as chair,” Sacks said. “I think the hires that have come in as full-time faculty are emblematic of that.”

Jackson noted that wanting to bring more Black people into the classroom also means admitting more Black students into Tisch. She said she has had positive experiences at screenwriting workshops because she has a network of peers who are Black women.

“When we workshop scripts, we have to utilize each other,” Jackson said. “In that, there’s my excitement and appreciation for their scripts, their characters and their shared understanding.”

Sacks argued that financial aid initiatives are key for increasing the diversity of students at NYU.

“Our university does not have economic diversity because of the cost to come here,” Sacks said.

The beauty of NYU courses is the potential to bring students from different backgrounds together, allowing them to learn from each other and develop cross-cultural understanding. The first step to achieving this is identifying the intersections between different demographics. For instance, Eurocentricity, views that focus on Western European and American cultures in storytelling, doesn’t just impact Black students — it impacts everyone.

“It can be a very wearying thing to always feel like you have to explain to this imagined universal audience, which usually defaults to a white audience,” she said. “I think it makes you internalize a lot of things. You get into a situation where what your culture is supposed to embody is what a predominantly white audience pressures you into creating.”

While Armenian and Black writers have vastly different experiences, the pressures imposed on them to explain and quantify their stories in order to be heard are shared. Readers often treat stories by marginalized writers as a guidebook to an entire group’s experience. Placing that impossible responsibility on the writer forces them to explain their existence rather than express it.

Brainstorming, drafting and critiquing scripts should inspire students to express their identities and improve their writing, not make them explain their culture and leave them feeling isolated. Black students deserve to read out their stories in a classroom without having to explain themselves, bite their tongues or hold their breaths.

Agabian argues that community agreements — such as using appropriate gender pronouns, can allow students to set their own boundaries and define their comfort levels in classrooms. This can act as an avenue for all students to communicate their needs, and it allows them to learn how to approach stories by writers of different backgrounds.

For some, screenwriting courses are a safe haven for students to share their work with peers and expert faculty. Caran Hartsfield, a Black NYU alum and Tisch screenwriting professor, feels hopeful about the path ahead.

“I can see my colleagues actively working and trying … to actively search for voices that they can share to address these concerns,” Hartsfield said. “I don’t want to put a pretty bow on it and say that we’re done. I don’t think that that’s the case. I think it’s a work in progress. And I think we’re making strides forward.”

With all members of the NYU community working to make these strides, Black stories could finally thrive at one of the nation’s best screenwriting programs.