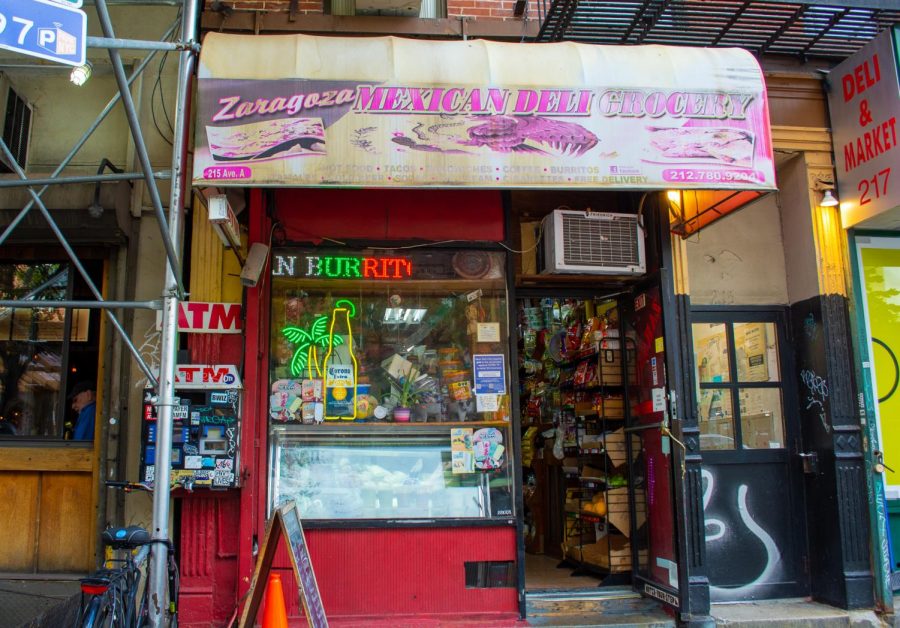 Zaragoza Mexican Deli and Grocery is located at 215 Avenue A in the East Village. This small Mexican deli offers a taste of Mexican cuisine and culture on the island of Manhattan. (Staff Photo by Manasa Gudavalli)

One of the golden food rules in New York City is that if you want traditional Latin American food at an affordable price, you head to the Bronx, Queens or Brooklyn — you can thank gentrification for that one. But as with all rules, exceptions can be made.

Zaragoza Mexican Deli and Grocery is the exception to that rule.

Located across Avenue A from the 14th Street Target lies a small bodega squished between two stores: Zaragoza Mexican Deli, or just Zaragoza. The tiny store is easily missed, but behind its humble exterior lies a piece of Mexico in lower Manhattan.

Bags of dried peppers, bottles of Tajín and other ingredients found in Mexican dishes line the walls of the store. A few tables are set up in the back across from a wooden counter where you’ll find an older gentleman unpacking boxes of popular Mexican snacks or serving diners a variety of Mexican food.

“Hello señorita,” he says, greeting me as I walk through the narrow doors. I usually come to the store for groceries when I’m cooking Mexican food. Today, I’ve come to the store in search of mulato and pasilla peppers for tonight’s dinner: mole poblano, a rich and velvety sauce made with chocolate and a variety of dried peppers native to the state of Puebla. “Have a good day,” he says, smiling through his mask.

I was lucky to find out about this hidden gem from my friend, Carlotta Guacci, who spent her summers in Mexico with her family in Guadalajara. Guacci, a CAS senior, stumbled upon Zaragoza last fall.

“I saw the store’s sign for Mexican items and went in expecting some shelves with Mexican brand items,” Guacci said. “Instead I found an older man and his wife handing a plate of tamales to a man.”

Guacci decided to sit down and have some tamales, a Mexican dish consisting of corn-based dough filled with meat or cheese steamed in a corn husk. The warm and rich flavor from the tamales comforted her, reminding her of the scents and flavors she grew up with.

Like many students, Guacci has found it difficult at times to connect with her heritage while at NYU. She joined the Mexican Student Association during her sophomore year, but still struggled to find community given the vast scope of the city. While there is a Mexican population in the city, most Mexicans live in Queens and Brooklyn in neighborhoods at least an hour’s subway ride away from campus.

However, stores like Zaragoza Mexican Deli offer a small glimpse of Mexican culture to Manhattan residents who can’t make the trip to the outer boroughs.

The store was founded by Pompeyo and Maria Martinez, who immigrated to the United States from Zaragoza de la Luz, a town in Puebla and the store’s namesake. And while Guacci’s family isn’t from Puebla, she has still found ways to connect with her heritage when she visits the store. Last fall, Guacci visited the store during Day of the Dead, a popular Mexican holiday celebrated just after Halloween, to purchase pan muertos and sugar skulls, two traditional holiday foods.

“The owners have always been really friendly to me,” Guacci said. “We speak Spanish to each other and they play banda or folk songs, which makes me feel even more welcome in their space.”

Guacci has returned on multiple occasions, even bringing friends to sit down and enjoy the store’s food and atmosphere — myself included.

While I’ve never visited Mexico myself, I do share Guacci’s sense of appreciation for the store that offers comfort through food and warm service.