How tarot cards are making waves at NYU

Tarot cards actually don’t have mystical roots — however, they do give users at NYU the freedom to create the world they want to see. 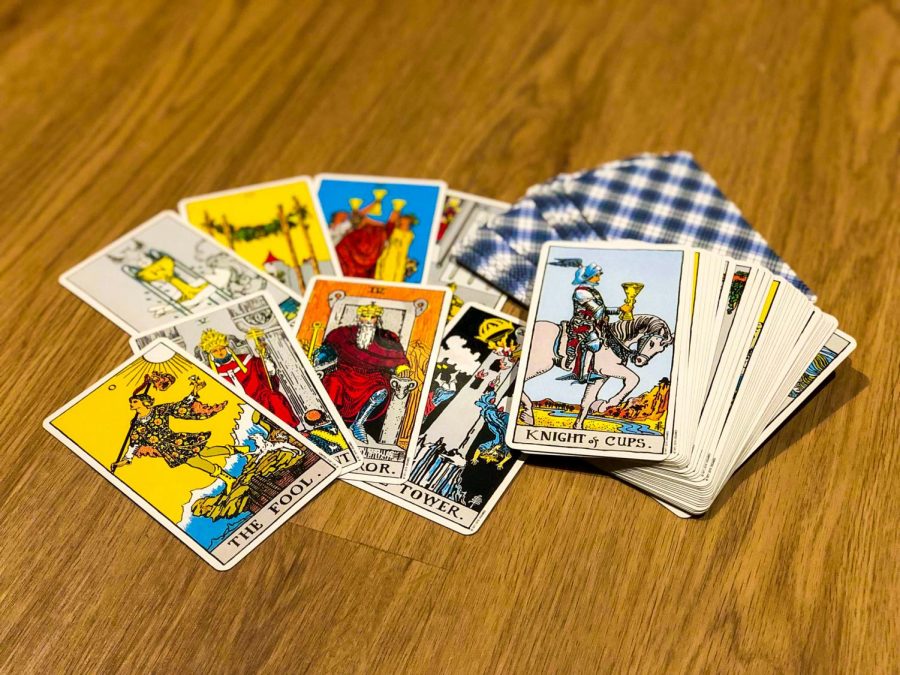 Tarot cards originated as a party game, meaning they have no religious or spiritual origin. As such, tarot has come to mean different things to different people within the NYU community. (Photo by Graham Harris)

Tarot cards actually don’t come from spiritual or religious roots — it was actually just a card game Italian aristocrats played at parties. Although some may be disappointed, this revelation can also be liberating: Because tarot doesn’t spring from mystical foundations, the user has the power to impart their own meaning from the cards.

Tarot is used in different ways within the NYU community. Some use tarot to validate their feelings and emotions, while others use it to bond with the people around them.

Nikki Myers, a junior at Gallatin, owns about 15 different decks. She uses it if she is working through a problem or needs help making life decisions, but she mostly reads other peoples’ cards as a side hustle.

“I started practicing tarot about four or five years ago, but during quarantine I started offering readings to make money during COVID,” she said, “Now it helps me a lot to pay for groceries and other things since I’m a first-gen student.”

She started this side hustle to pay for her own basic necessities, but it has developed into a way of helping and connecting to people. She remembers how her best session was with a customer from the U.K. because she had offered Zoom readings.

“I got to see his reactions when I was able to see very specific details about his situation,” Nikki said. “He would be like, “I didn’t tell you that — how did you know?” and other details would pop into my head like ‘Do you have a sister with red hair?’ or ‘Does this movie/song/book have any significance to you and this situation?’”

There are also many tarot readers who use it purely for their own clarity. For instance, Gracelyn Beal, a sophomore at Gallatin, uses it to understand her own reality.

“While I do feel like they ignite spiritual introspections, I don’t buy into the idea that the cards are their own magical entity,” Beal said. “I think the power is in your interpretation.”

Similarly, Tisch senior Georgia Ambrose uses it to interpret her personal thoughts, as well as to bond with her friends.

“I don’t take them as Bible. I just like to see how I’m feeling and I learn a lot from how I respond to the information. So, for example, if I’m disappointed, I know that I want the opposite of what it told me, which can be good to know,” she said. “I also love to just do it as a group activity and see how other people respond. It’s also good bonding to get to know people’s worries and beliefs and what they need in the present moment.”

Whether you’re using tarot for yourself, with friends or to make some money, it’s up to you to decide how you want to interpret everything. It may not actually accurately predict your future, but it’s fun — and that’s all that matters.