We’re putting in the work, so you don’t have to, starting with groceries. All the Trader Joe’s in Manhattan ranked from best to worst. 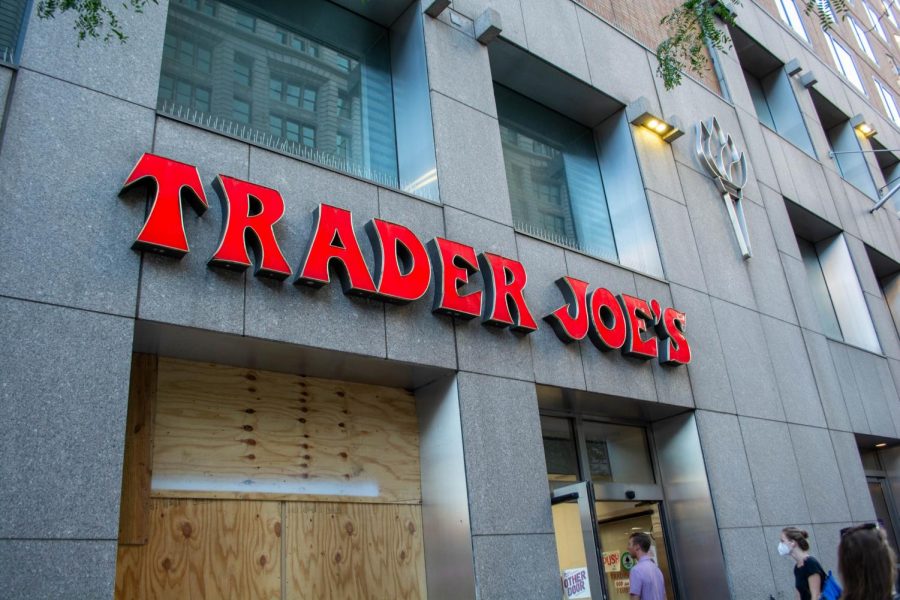 The Union Square Trader Joe’s is one of eight locations in Manhattan. In this Ranked series, we reveal how this Trader Joe’s stacks up against the others and which reigns supreme. (Staff Photo by Ryan Kawahara)

For the first installment of our Ranked series, we decided to tackle a subject near and dear to our hearts: Trader Joe’s. Across the board, we’re big fans; Sabrina even has a Trader Joe’s sticker on her laptop to show her support. But let’s be real: We all know that some of the New York City locations are lackluster. As one of the cheapest grocery markets in town, it’s important to know which ones to avoid. So we visited the eight Trader Joe’s in Manhattan to determine where they stand. You’re welcome.

It’s always crowded — especially during evening rush hour — and filled with Solidcore girls and guys who skip leg day. You’ll really like this location if you enjoy the feeling of claustrophobia and the incessant underlying scent of B.O. The fluorescent lighting is dimmer than usual, and the line for checkout bleeds into the frozen aisles. It’s the place to go if you like being confused about who’s checking out and who’s still shopping. Also, the good snacks are in the line, which is annoying if you’re like us and tend to stand there for minutes as you struggle to pick one. The layout of the store, however, makes sense — unlike other Trader Joe’s locations (Broadway-72nd Street, we’re looking at you).

This one was a bummer. Our friends hyped it up as the best Trader Joe’s, but we were almost Union Square-level stressed by the experience (more on that below). First of all, it sprawls like a maze over two floors, both of which are below ground. That means no cell service to call for help if you get lost in the frozen section. Second, the aisle layout is bizarre. The flowers are tucked in a circular atrium in the back across from the dairy products. The line blocked all of the meat and cheese. Worst of all, after making a purchase, you have to double back across the line to reach the exit, which just feels wrong. The outing made us understand the value of urban planning. After shopping here, you’ll want to take a moment to relax in nearby Central Park.

Like Union Square itself, this Trader Joe’s is always bustling. Also like Union Square, that’s not necessarily a good thing. Its unbeatable location underneath Palladium comes with a cost — crowds. The compact layout typically forces the checkout line to wrap all the way around to the produce section at the front. Browsing the aisles without tripping over another customer is a herculean task. But credit where credit is due: The store boasts the borough’s only Trader Joe’s Wine Shop. Cheers to that.

The location’s best feature is that it’s across the street from a Target — as well as from Joey’s apartment complex. But otherwise, it’s in a pretty isolated part of town between First Avenue and Avenue A. There’s really nothing to say about this location, except that it is completely, unexceptionally average. It’s just a grocery store with fresh produce, snacks, and lines that aren’t too long — but also aren’t short enough.

This one is gigantic, and it’s directly below a Target, making the impulse buyer’s dream (or nightmare) come true. Like the 72nd Street location, it’s below ground, so you can’t kill time on your phone while waiting in line. Other than that, a solid entry in the Trader Joe’s collection.

You don’t have to take an elevator downstairs at this one! It’s located on the first floor, and it’s in a great location. It’s planted on 6th Avenue between 21st and 22nd Streets — definitely close enough to the Union Square location to choose this one instead. Not only does it have natural light, but the aisles are also extremely wide. It does get crowded, but you rarely find yourself bumping into other people. Its best feature is that the line is at the opposite end of the entrance, shoved right between the bread and second-rate snacks, so no one is awkwardly trying to squeeze past you to get Trader Joe’s newest knock-off.

Our favorite Trader Joe’s. For starters, this Trader Joe’s is on one floor on the ground level — no escalators involved! It feels positively suburban with its natural lighting and wide aisles. The layout makes sense, with flowers and plants at the front, produce right behind, and everything else shoved to the back and left. Joey’s favorite part is that instead of NYU Grimes impersonators, the quiet store is filled with young families and the elderly. The lines also aren’t super long, so a quick grocery run is actually possible. To top it off, it’s super close to Central Park, so it’s perfect for grabbing some grub and beer for a cute weekend picnic.