Greenwashing: How companies are putting up an eco-friendly front

Greenwashing dupes consumers into spending their hard-earned green on unsustainable and unethical products. 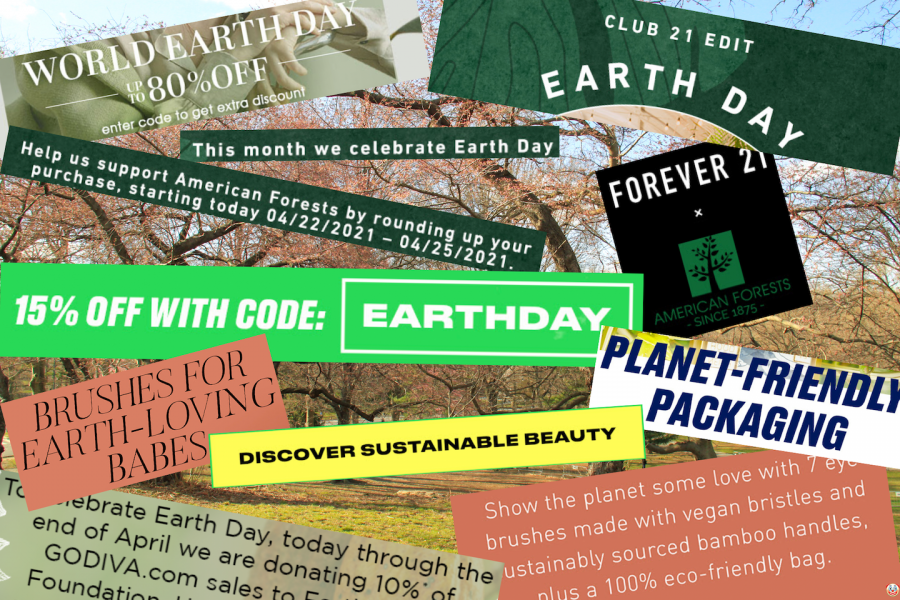 This past Earth Day, I opened my email expecting the usual obnoxious junk and spam. What I received was something that annoyed me even more: Earth Day marketing emails. Why were companies like Forever 21 and YesStyle trying to get me to consume their less-than-green products on a holiday based entirely around environmentalism? I was peeved, but I should have expected it. After all, using environmental consciousness as a marketing tactic is something companies do all the time, through a misleading practice known as greenwashing.

Greenwashing is defined by Merriam-Webster as “expressions of environmentalist concerns especially as a cover for products, policies, or activities.” In other words, it’s when companies utilize eco-friendly rhetoric to try and sell products and cover up the fact that they are actually far from environmentalists.

Greenwashing can take on many different forms, ranging from vague, misleading or unproven claims, to downright lying about receiving environmental certifications like ENERGY STAR. Sometimes, companies even make up certifications that don’t even actually exist or mean anything — just saying “100% natural” can trick unwitting consumers, even if the label has not actually been evaluated or defined by a qualified third party.

A prime example of greenwashing in action — right down to the literally green-hued label — is Coca-Cola Life. The soft drink was Coca-Cola’s 2013 attempt at an allegedly environmentally friendly and health-conscious product. Marketing for the beverage featured smiling picnickers lounging in a lush field of green grass and wildflowers, evoking an idyllic image of nature meant to convince consumers that this sugary soda is actually great for their bodies and the environment. The plastic bottle (dubbed the Plantbottle) is made of recyclable material, after all!

The reality? That plastic probably ended up polluting plenty of environments, considering Coca-Cola was ranked by Greenpeace as the leading plastic polluter in 2019, and produces around 100 billion single-use plastic bottles a year. Coke has also resisted legislation intended to force them into adopting more environmentally friendly practices, like when they pushed the European Union to abandon a measure that would have required caps to be attached to bottles in order to reduce marine pollution.

Coke Life wasn’t even Coke’s only foray into greenwashing — after all, the corporation often runs ads depicting happy polar bears sipping soda in the Arctic, while simultaneously contributing to the environmental destruction that is threatening the habitats of those bears’ real-life counterparts.

At the end of the day, it is important for us to remember that we as individual consumers don’t bear the brunt of the responsibility for the climate crisis. That inglorious prize goes to the corporations and government leaders whose exploitation and inaction have contributed to the bulk of the environmental damage.

But this doesn’t mean that we shouldn’t make an effort to ensure that we are doing it as ethically and sustainably as we possibly can. It can be a difficult task — and it’s made even more challenging by greenwashing.

So how can we keep ourselves from getting fooled?

As time-consuming as it can be, the best answer is to do your own research and view all claims with a skeptical eye. If a company uses undefined labels like “sustainable” or “100% eco-friendly,” don’t take them at face value. If they aren’t backed up by concrete evidence, they are likely just lip service.

As for products claiming to hold third-party certifications like ENERGY STAR or Leaping Bunny, you can visit their websites to certify that the stamp of approval is legit.

Don’t let aesthetics trick you — eco-themed packaging isn’t an indicator of actual sustainability. Look into the backgrounds of brands. Websites like Ethical Consumer can reveal the unsustainable skeletons in a corporation’s closet.

Next time you come across a product suspiciously claiming to be eco-friendly, take a closer look. Chances are, there’s a reality behind it that’s less than green.