Moving in Together During a Pandemic: Why Now?

NYU couples tell stories of how COVID-19 impacted their relationship — including why it made them decide to live together. 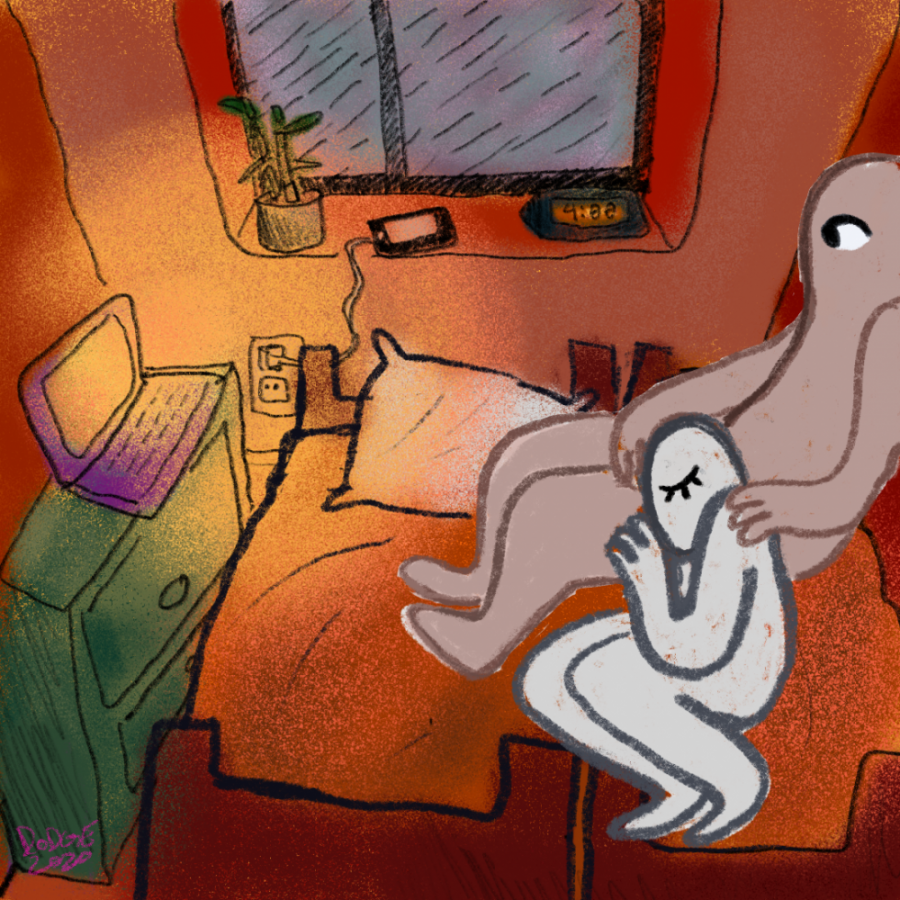 Several NYU couples choose to live together during the COVID-19 pandemic. Couples have had to make adjustments to their living situations, such as rearranging furniture and making lifestyle changes. (Staff Illustration by Charlie Dodge)

Attending college brings about new responsibilities for some, such as officially moving out of childhood homes, no longer living with parents and maybe even cooking for ourselves for the first time. Most of us begin to live independently, some with roommates, some alone and some with their significant others.

In light of the COVID-19 pandemic, several NYU couples decided to move in together at the start of the fall semester.

Steinhardt junior Ellie Condello lives with her boyfriend, Tisch junior Aaron Attoma-Matthews, in Gramercy Green Residential Hall with another couple. Condello and Attoma-Matthews started dating in January, but decided to take a jump in their relationship due to NYU’s COVID-related building restrictions, fearing they wouldn’t be able to spend much time together during the semester.

“One of our roommates suggested that we share the space with them as two couples,” Condello told WSN through email. “We have the smaller room of our dorm which has been a fun challenge of trying to fit everything we need in the space. In order to create space in the room, we pushed the beds together in the corner. There still isn’t even room for two desks, so one of us does school from a desk in our common area.”

Similarly, Tisch junior Grace Sessinghaus moved into an apartment with her boyfriend, CAS junior Benji Piaścik, and two friends after experiencing last-minute housing changes in the summer. Because Piaścik had already been quarantining with Sessinghaus for five months at her house in Los Angeles, they figured it would be a smooth transition.

“We do not share a bedroom — we have bedrooms right next to each other because we figured it would be important since we’re only 20 years old moving in together, again, because like the pandemic, that it would be wise to have our own separate spaces but then option of spending time together whenever we want to,” Sessinghaus said.

Additionally, Steinhardt senior Sam Sherman decided to move in with her boyfriend, Steinhardt junior Reese Diaz, when he needed a roommate to split his rent. Upon the abrupt move out of New York in March, they had only been dating for two months, but found that their relationship solidified when Sherman quarantined with Diaz and his family in Pennsylvania instead of returning to her hometown in the virus hotspot of California.

“California was looking pretty bad and my family was having some health problems,” she told WSN through email. “I think the only reason we ended up deciding to live together is because we were able to get along so well and were just so comfortable with each other after living with his family.”

When asked what their parents thought of moving in together at this age, each couple had a different story.

“Our parents aren’t completely thrilled with us living together,” Condello said. “But they understood that with the regulations of the buildings right now for COVID-19 and along with our super busy schedules that we wouldn’t really be able to see each other if we didn’t live together. They said that if we weren’t in a pandemic and things were normal, we would not have moved in with each other this early.”

On the contrary, Sessinghaus’s parents were on board.

“My parents really support it, they saw how well we lived together in California,” Sessinghaus said. “They like the safety of me being with him and two other boys a lot. My friends were really supportive too.

“We’re like a team,” she said. “We collaborate on meals, laundry, and creating a living space we can both coexist in. We talk about our work from our respective acting programs and support one another in our endeavors.”

A challenge Sessinghaus and Piaścik face now is having two separate bedrooms after sharing one in Los Angeles for five months.

“Living together has been pretty good so far, of course there were the challenges with getting adjusted to life in two separate bedrooms,” she said. “We like to have as much space as possible to feel like a normal couple in our twenties. You know, like, not fully married off or anything like that.”

As for Sherman, she also admitted that living together has been comforting, especially amongst the chaos in the world today.

“We’re both super busy with work, so it’s also just an added bonus to like come home to each other at the end of the day,” she said.

The students admitted that they never expected to live with a significant other in college, but are glad they decided to.

“Neither of us imagined we would be living with a significant other at this age,” Condello said. “But we also never thought there would be a pandemic while we were in college and that we would have to try and live around that.”

Sessinghaus agreed that it is a sign of the times.

“I did not think I’d be living with a significant other at this age at all, but it’s just the circumstances of the coronavirus and it works out with him,” Sessinghaus said.

When asked about the possibility of breaking up, each couple answered that they have plans in case the unthinkable were to happen.

“We’re enjoying what we have right now and we see it as counterproductive to look too far forward into the future,” Condello said.

Sessinghaus isn’t concerned either since they each have their own space apart from the bedroom they shared in LA.

“We wouldn’t have made this decision together had we not been strong enough to handle this, especially because we lived together for five months together in LA,” she said. “This is actually taking a step back for us.”

Sherman is also confident. “It’s something we talked about a lot before moving in together,” she said.

According to Sessinghaus, it’s been an adjustment to get back to life in the city, but they are happy to have each other during the pandemic.

“I’d say overall, it’s been way better than I could have anticipated with anybody else and I’m very grateful to be going through COVID with him right now and to have his support,” she said.

For Sherman, the COVID-19 pandemic made her trust Diaz more.

“I really don’t think we’d have gotten so close or would be at the point we’re at now without going through COVID-19 together, and I’m honestly really thankful for having him in my life and for being so close to him now,” she said.

Condello said that the virus helped their relationship a lot in the long run.

“COVID-19 has defined our relationship,” she said. “Being separated by COVID taught us about communication, how strong our relationship can be, how to get creative with our dates, and that Zoom screen sharing is better than Netflix Party in some cases.”

A version of this article appeared in the Monday, Sep. 21, 2020 e-print edition. Email Addison Aloian at [email protected]