Navigating the Transition to Remote Internships

As the pandemic continues to spread and remove workers from company offices, students try to navigate the remote internships they once assumed in-office. 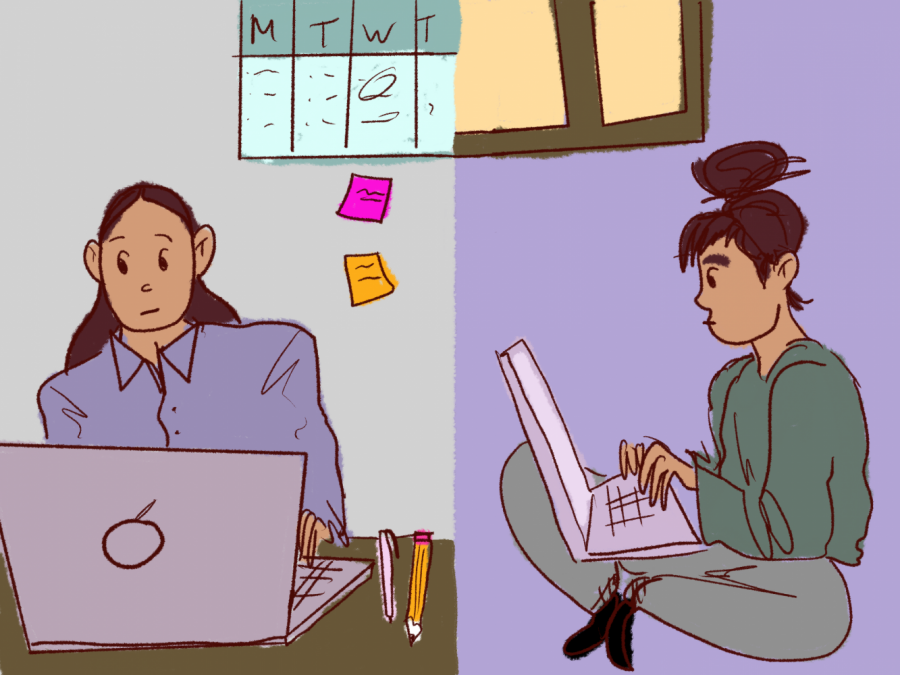 With social distancing measures put into place, many students face the challenge of adapting to remote work for internships as well as classes. While some continue with similar tasks, others have had to pick up new skills. (Staff Illustration by Charlie Dodge)

In the wake of the ongoing COVID-19 pandemic, most interning students had to adjust to online internships as their employers moved out of their office spaces. In their new workspaces, their homes, students take on new responsibilities as a result of the changing norms that the outbreak has set flame to.

Steinhardt second-year master’s student and curatorial intern at The Paley Center for Media  Luwen Qiu has noticed a shift in her tasks as a result of the center’s changing needs. Prior to the onset of the pandemic, Qiu’s responsibilities primarily involved preparing for upcoming events, conducting research on involved participants and composing interview questions for panel discussions. However, in accordance with New York state’s shelter-in-place order, events she’s worked on have been postponed. As a result, the center has opted to release content strictly online for the time being, slightly altering Qiu’s tasks.

“There’s definitely a tendency to work on what people are interested in right now, instead of what is happening in the media world,” Qiu said. “It’s great when they overlap, but right now I feel like we’re more leaning toward what people want to see rather than giving them something we’ve curated more concretely.”

Though Qiu is unable to work in the center’s Midtown office, the database once used in-office is readily-accessible at home, altering her work routines minimally. Others, however, face much larger challenges in terms of drastically changed environments.

Tisch senior Katie Ajemian is currently interning at Sony Music Entertainment as a Video Content and Production Intern. As an intern within their creative department, she is responsible for editing content, ranging from music video trailers to social media advertisements, that promote Sony’s artists and products. While the kinds of tasks she is performing from home have remained similar to those she performed prior to the outbreak, the biggest impact on Ajemian has been the change in her surroundings.

“When I worked in the Sony Entertainment office I would edit videos in edit suites with multiple monitors and large speakers,” Ajemian told WSN in an email. “Now I edit on my personal laptop at home.”

While switching to a new workspace has been a challenge in itself, many companies in the media realm, from advertising to the music industry, have taken large hits as a result of the pandemic, slowing content production and, in turn, impacting Ajemian’s workload.

“I still get to edit videos with unreleased footage or music so it’s nice to know that Sony trusts their interns with confidential information even while working at home,” Ajemian said. “However, there is less work than I normally got while working in the office. I think part of it is due to the fact that musicians aren’t touring or doing any proper promotional work right now so there is a lot less stuff that needs to be done.”

In addition to the mediascape, the fashion industry has also taken a hit, with major labels being unable to unveil new apparel. CAS senior Rika Shinozaki is facing more technology-related challenges as a Human Resources Intern at Vera Wang.

Shinozaki is responsible for tasks relating to the onboarding of new interns, from screening resumes and cover letters to the completion of interviews. While the fashion brand continues to hire interns, conducting these tasks from home has posed a heavier workload for Shinozaki. Working from home means digging through past communication to find proper email templates that are normally stored on the office computer.

“Making a detailed excel sheet to keep track of all information and communication has been helping, but it is definitely a lot more work than how it was in-person,” Shinozaki told WSN in an email.

As more and more companies continue to pause hiring, shaken up by the pandemic’s effects on the economy, students continue to hold onto their internships for both experience and financial security.

A version of this article appeared in the Monday, April 13, 2020, e-print edition. Email Kate Slate at [email protected]