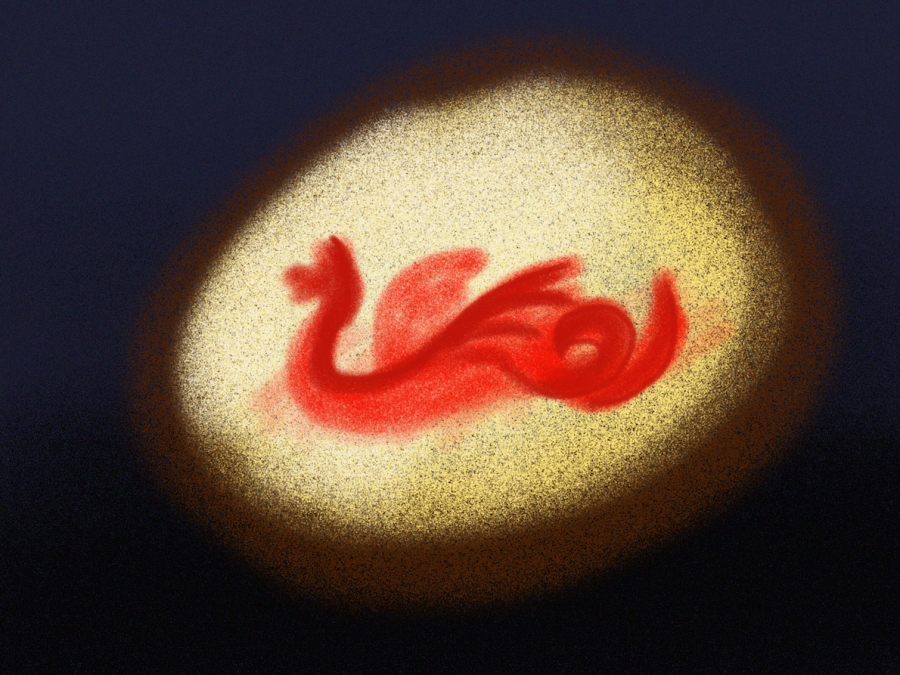 Red Dragon Society is the best-known of NYU’s historic secret societies. The organization is a coed group exclusive to CAS seniors that has been around since 1898. (Staff Illustration by Charlie Dodge)

Secret societies seem to belong only to the fictional or otherwise-mysterious realm of dark academia. They hide behind ivy-covered walls, candlelit dungeons and cultish chants. No NYU student would say they fit NYU’s brand: cosmopolitan, nonexclusive, independent. But you may want to reconsider how well you know your university and its secrets.

The internet will tell you that NYU’s Red Dragon Society has been around since 1898. It’s a co-ed group exclusive to CAS seniors, and it’s the best-known (and only still existing) of NYU’s historic secret societies, other than the Philomathean Society, which only existed from 1832 to 1888. But to learn anything more about this elusive organization, I had to go straight to the source.

The four Red Dragons on the conference call with me all kept their names hidden, simply referring to themselves as Dragon 1 (Politics, Class of 1973), Dragon 2, (Neuroscience, Class of 2011), Dragon 3 (Sociology, Class of 2011) and Dragon 4 (Politics and Public Policy, Class of 2017).

Dragon 1, the most senior member, confirmed that the organization emerged at the end of the 19th century. It only allowed men until the mid-1960s, when it began accepting women. He added that it took a hiatus between the 1970s and the late 1990s with the sale of NYU’s former campus — the University Heights campus, located in the Bronx — in 1973, the same year that he graduated. He believes that the Red Dragon Society was the only secret society to survive the move downtown, but no one can be sure.

“The secret societies were all at the Heights,” Dragon 1 said. “I know [other secret societies] existed while I was there. If somebody says [they] exist [today], it’s conceivable.”

So what exactly is this sole secret society that remains in our midst? Unfortunately, most of the details are (you guessed it) secret. The Dragons could not disclose the organization’s mission, leadership structure or selection process. Even the members don’t know it all.

What they could say is that the initiation involves a dinner of inductee and alumni guests in the fall. Between 15 and 30 inductees are chosen each year — a veritable handful of CAS’ student body. Despite that, the numbers add up over the years; Dragon 1 didn’t think that any member had met all of their fellow Dragons.

But rest assured, though the selection process is opaque, the Dragons are certainly high-achieving and impressive people.

“[It’s] pretty damn diverse … There are higher governmental officials, published writers. I know of at least one Pulitzer Prize winner,” Dragon 1 said. “We really don’t pay attention to what they do. Who they are makes more sense.”

“They seem to always identify the right students,” Dragon 2 agreed.

All four of these Dragons had heard of the organization before being inducted, whether through word of mouth or a Washington Square News article from the late 2000s. All four had admired its prestige. And as members, the Dragons say they use their status for good.

“Personally, I think it’s a way for me to contribute back to more alumni, folks that are heading off into the world, providing mentorship and guidance in a really tight-knit community that we try to create,” Dragon 2 said. “There’s nothing like this elsewhere across the university or the U.S.”

According to the Dragons, NYU’s secret society is not the same animal as what you’d think of at places like Yale or Georgetown. The Heights campus was more of a traditional campus with a much smaller student body. But today’s campus at Washington Square is drastically different, and its culture followed suit.

“I think that community is just something that has a different look and feel at NYU,” Dragon 3, a relatively recent graduate, said. “So I think that the Dragons are an interesting denoting of something that’s perhaps more [like] traditional residential campuses that have lots of sprawling fields and quads and whatnot. But I think, also, it would be a mistake to lump the Dragons in with like all other secret societies or other colleges.”

For the Dragons, secrecy is practical, not flashy.

“The secrecy, we think, helps with a couple things we want to accomplish,” Dragon 1 said. “While we’re elite, we’re absolutely not elitist. We don’t want people fighting or overtly trying to game the system.”

“I would say that the spirit of the Dragons is about meritocracy and accomplishment and involvement at the university, and in many ways, other secret societies at peer institutions and otherwise rely on nepotism and other types of relationships to induct their [members],” Dragon 2 said. “And I’d say there’s a clear difference between us and other societies.”

As NYU continues to grow and evolve, you can be sure that the Dragons will adapt with it.

“I think the students are the same, and the inductees are the same in their hearts,” Dragon 1 said. “That’s the only thing I really care about. And I think everybody who’s involved in it, shares those values,”

So yes, NYU is a large and bustling university distant from walled campuses and mythology.

But even as it sets itself apart from the pack, NYU will never shake off its history or traditions, and it will never be without its secrets.

A version of this article appeared in the Monday, April 13, 2020, e-print edition. Email Sabrina Choudhary at [email protected]