Where Did You Go? Students on Being Kicked Out of Housing 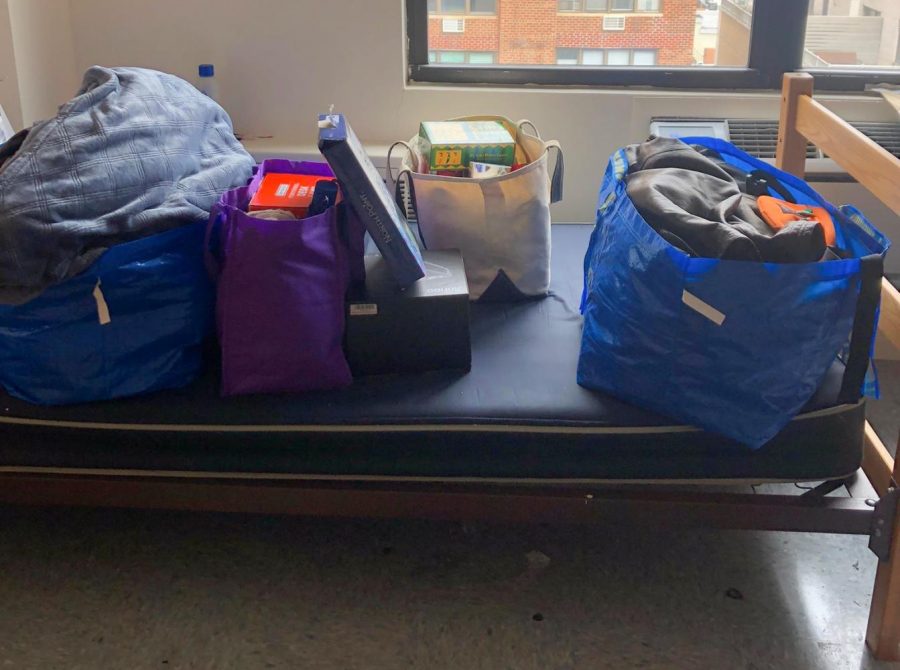 Students pack up their belongings in preparation to move out of their dorms. Many students returned home, while others stayed with relatives and friends. (Staff Photo by Leo Sheingate)

Last Monday on the first day of Spring Break, all NYU students received an email from President Andrew Hamilton with updates on what procedures NYU had been taking regarding COVID-19. Most notably, Hamilton had informed all students living in residence halls for the school year that they had six days to move out of their dorm, and advised them to preferably move out within 48 hours.

The memo came with extreme backlash and the creation of multiple petitions to push back the deadline or stop the eviction altogether. Many cited that the notice came abruptly, making it hard to return to NYC to move out, especially after the global travel restrictions and the dangers of traveling during an outbreak.

This sudden notice had students scrambling to figure out not only how to move out of their dorms in the midst of a pandemic, but where to go if they couldn’t go back home due to varying circumstances.While the university did give students the option to request to stay within housing, many found they were not approved to do so unless it dealt with Visa issues.

Kelly Lim, a Steinhardt first-year who had lived in University Hall, is staying on a friend’s couch in Brooklyn and plans on doing so for a few weeks until moving to another friend’s couch in NYC before making her way to Boston instead of going home to the Bay Area, which has been hit very hard by the virus.

“I thought traveling home would be futile, expensive, and just generally unnecessary — especially because my relationship with my parents isn’t the best,” Lim told WSN over Facebook Messenger. “Additionally, while my parents are healthy, a lot of their coworkers and colleagues aren’t, and if I were to potentially expose my parents to COVID-19, they could expose many more people that are at higher risk than the people I generally interact with in New York.”

Many students who found themselves displaced after Hamilton’s email turned to friends or friends of friends who could host them for the time being. Throwing out non-essential items and living out of a suitcase was also what students had to turn to in order to hop from place to place.

A Coral Tower resident and Gallatin sophomore, who asked to remain anonymous, is also staying with a friend at their apartment.

“I’m from Chicago, and I didn’t return because it’s really difficult and disorienting for me to be back there,” they said over an email interview with WSN. “I also couldn’t imagine being trapped in a place where the only people I’d be interacting with face to face would be people who don’t use my pronouns — I use they/them pronouns — and basically believe that who I am, in terms of gender identity, is fake/is part of a mental disorder — that thought was very dysphoria inducing if I was stuck there, it would make me feel very gaslit all the time.”

This Gallatin sophomore also acknowledges the extreme risk NYU put students at in requiring them to move with more cases popping up in NYC everyday.

“I was quarantining in my dorm room before this,” they said. “My suite was empty, and like 90% of my floor was empty because people who wanted to, and could go home, did. […] But by forcing us to leave, they made everyone stop quarantining — I interacted with exponentially more people because of moving out than I would have if they had just let me stay.”

For others who do not call the United States home, staying with family across the country was the only option. CAS sophomore, who also requested to redact their name, had lived in Alumni Hall and could not go home to their family in Dubai, based on the fact that the city is only letting UAE passport holders into the country.

“I am currently staying at an uncle’s house in Texas,” they said. “I have a place here, but isolation and lack of car, in addition to the difficulty of being independant [sic] due to food scarcity, caused me to move in with family.”

While Lim, the Gallatin sophomore, and about the whole NYU student body held generally negative views on how NYU has handled this situation, this CAS sophomore has a different perspective.

“From issuing refunds, to the COVID-19 emergency aid grant, they could never have predicted how bad things could get,” the CAS sophomore said. “I do wish they could have told us to pack our stuff up before spring break, however things were already stressful as is. The departments are being as helpful as they could. I complained the first few days in regards to their reaction, however when analyzing what they are doing, in the timeframe and grandness of their actions, they are doing very well.”

Visa issues, familial tensions and hometowns having severe outbreaks are some of the circumstances that contributed to students inability to travel home. Though we are truly living in unprecedented times, many agree NYU’s handling of this whole situation could have been a bit better.

“I wish that they hadn’t reassured us multiple times that the dorms would stay open for the rest of the semester and that they could’ve maybe made these conclusions sooner,” Lim said.

A version of this article appeared in the Monday, Mar. 23, 2020 print edition. Email Bella Gil at [email protected]