‘Halo Infinite’ multiplayer: the revival of a franchise

After years of anticipation, “Halo Infinite” multiplayer has been released with a fun factor that masterfully combines series traditions with novel first-person shooter elements. 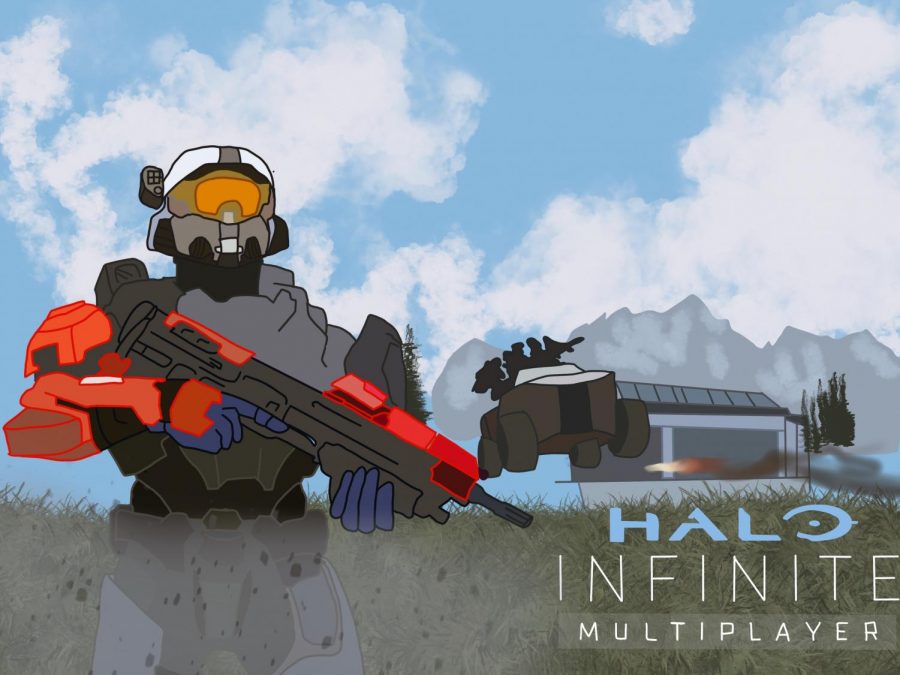 Developed by 343 Industries, “Halo Infinite” is the newest installment in the “Halo” franchise. The game has successfully blended familiar aspects of “Halo” with modern first-person shooter elements. (Staff Illustration by Manasa Gudavalli)

There has been immense pressure for the Halo franchise to return to its roots after fans experienced years of disappointment from developers. The newest installment’s multiplayer release looks to be the series’ rebirth.

“Halo Infinite,” developed by 343 Industries, is the newest installment in the “Halo” franchise — a series of games that focuses on super-soldiers called Spartans. The multiplayer mode dropped on Nov. 15 as a surprise to players who were waiting for the game’s scheduled Dec. 8 release. Despite corporate greed and some questionable game mode choices, 343 Industries has successfully blended traditional “Halo” multiplayer with modern first-person shooter elements.

The movement is silky smooth — sliding and climbing up a wall to get the high ground on an unsuspecting enemy is satisfying and uncomplicated to pull off. The classic “Halo” strafing pairs perfectly with these modern additions, leading to battles that rely as much on movement mastery as they do on weapon precision. The newly-added grappleshot, akin to a grappling hook, allows for unpredictable maneuvers that can change the entire course of a battle — imagine fighting an enemy team one-on-two, and a teammate flies in out of nowhere to turn the tide. The movement in “Halo Infinite” is seamless and provides a vital basis for its multiplayer.

The weapons are as fascinating as they are versatile. The BR75 battle rifle makes its return as a burst-shot rifle that requires constant precision by its handler; the Skewer is a new alien weapon with a harpoon-like bullet that can eliminate enemies in one shot; the Sentinel Beam emits a continuous stream of energy that feels more powerful than it did in previous titles. Some weapons, though visually interesting, feel useless in most situations. The Pulse Carbine, for example, fires bursts of plasma balls, which take far too long to reach the target and do little damage. Nonetheless, as a whole the weapons are well-balanced and fun to use, and most can be well-utilized with proper aim and movement from a player.

Vehicles add a riveting twist to the game. Returning classics, such as the levitating alien Ghost and human-made Warthog car, still feel great. On top of being extremely fun to drive thanks to masterful handling controls, there are ample ways to counter them —  such as the rocket launcher and grappleshot  — which prevent these vehicles from effortlessly dominating a match. However, the Wasp, an aerial vehicle, can be annoying in the proper hands. Its machine guns and rockets are a bit too overwhelming when paired with its superior maneuverability. Seeing as though that is the only complaint, 343 Industries has largely succeeded in creating and remastering vehicles that “Halo” fans can love.

Issues arise with the developers choices in game modes. There are three four-versus-four modes at the moment: Fiesta, Quick Play and Ranked. Fiesta has players spawn with a random set of weapons, which is casual, fun and a good way to learn how to use everything in the game. Quick Play is a blend of casual game modes in which players start with an MA40 assault rifle. Ranked is similar to Quick Play, but involves a ranking system and has players spawn with the BR75 battle rifle. These modes have great flow — the problem is that players cannot choose the specific game mode. In past titles, playlists for Team Slayer and Capture the Flag, for instance, were separated. It is not a game-breaking flaw by any means, but there are times when Oddball, in which a team has to hold a skull for a certain amount of time, isn’t appealing.

Maps for these four-versus-four modes, though, are the best they’ve been since 343 Industries took over the “Halo” franchise. Recharge is set in a power station and includes numerous corridors and vertical levels surrounding a central zone with cover. Action takes place everywhere, and objective modes are well-paced and intense. Streets takes place at night in a city market — it is visually stunning, and constant flanks around the edges of the map have players on perpetual high alert. Bazaar brings a simple three-lane layout to the game, allowing for strategic team positioning and lending itself to both short-range and long-range battles. Frankly, there is no four-versus-four map that I would be upset to play.

Big Team Battle, which consists of a 12-versus-12 format, commits the same sin as four-versus-four modes by not allowing players to choose what specific mode they’ll play. But there is another problem: The maps are utterly terrible. Deadlock is far too open and its environment is drab — this map lends itself to players who sit in the back of the map and wait for someone to walk into their crosshairs, which is likely to happen due to the scarcity of cover. On High Power, there seems to be an enemy always lurking above you, whether it’s on top of a high-rise mound of dirt or flying in a Wasp. Both situations are equally annoying and there is, in many cases, no way to easily reach the aerial player unless you have a Grappleshot. Objective modes are slow and players start with an MA40 assault rifle, which feels useless on such large maps. When I play this game, I hope that only three of my friends are playing with me so that I do not have to endure the mess that is Big Team Battle in “Halo Infinite.”

It is worth noting the corporate greed present in “Halo Infinite.” Although the multiplayer is free-to-play, there is a microtransaction system in which players may need to spend exorbitant amounts of real-world money to unlock armor. As the art style in “Halo Infinite” is vibrant and diverse, armor customization is a big part of the “Halo” franchise, fans are upset that they cannot unlock everything simply by playing the game. This unwelcome development is hardly surprising given the success that games like “Fortnite” have yielded with a similar model, but will hopefully be removed following the backlash it has received from players.

The multiplayer in “Halo Infinite” was a pleasant surprise for fans of the series, and despite a few blunders, 343 Industries has largely delivered on game mechanics, objects and maps. As it stands, the experience is fun and competitive, and will certainly continue to succeed for a long time to come.