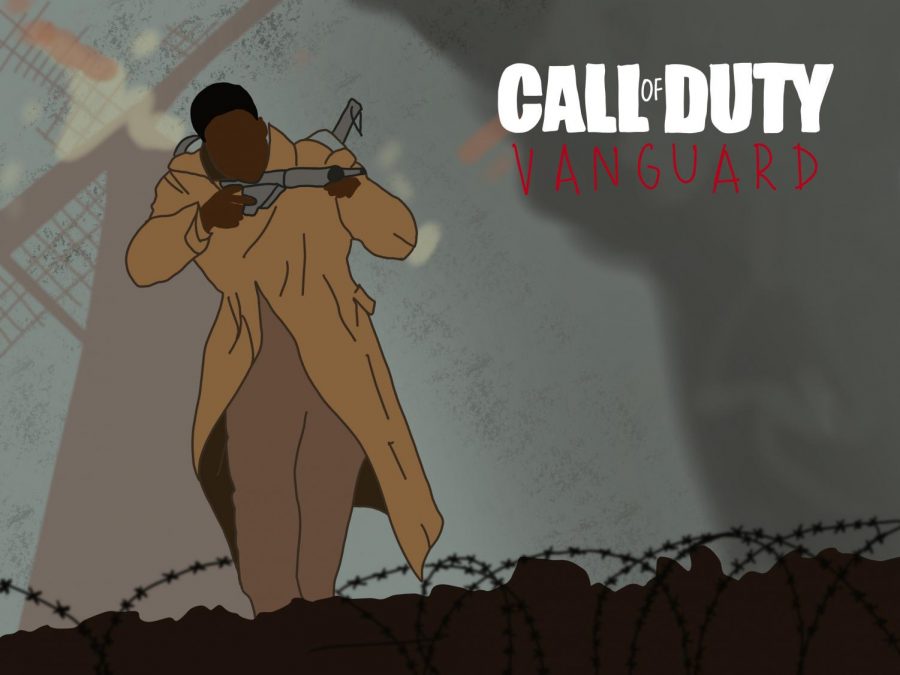 Though historical revisionism is an issue in video games, taking liberties with the details can enhance the game play experience. (Staff Illustration by Manasa Gudavalli)

The spread of misinformation is as rampant as ever, and video games are no exception to this. Despite the need for historical accuracy in both scientific and political fields revolving around topics like war, when it comes to video games, some kinds of inaccuracies may be worthwhile to enhance players’ experiences — especially with “Call of Duty: Vanguard.”

To be clear, this is not an endorsement of the kind of historical revisionism the “Call of Duty” franchise has come under fire for in the past. The 2019 reboot of “Modern Warfare,” for example, drew significant criticism for its portrayal of a brutal Gulf War air offensive — in the game, players defended against Russian attacks; in real life, it was the United States that obliterated a mix of military and civilian targets in what has been described as a war crime. That is the kind of misinformation that does significant harm, and game developers must depict historical events responsibly. When it comes to gameplay details, however, taking creative liberties can be a necessary component of making an engaging game.

Developed by Sledgehammer Games and published by Activision, “Call of Duty: Vanguard” — the newest installment in the long running “Call of Duty” franchise — is set to release on Nov. 5. Since the series’ inception in 2003, players have experienced first-person shooter action as World War II soldiers in “Call of Duty 2” (2005), Cold War operatives in “Black Ops” (2010) and wall-running robots in “Infinite Warfare” (2016). “Vanguard” is a return to the franchise’s roots.

As another WWII Call of Duty game, “Vanguard” is an opportunity for developers to incorporate new gameplay mechanics into a traditional gameplay format. Sledgehammer Games tried this in 2017 with “WWII” (2017), a game that largely failed to incorporate novel advancements. Instead of being immersed in reimagined WWII gameplay, players ended up with stale map designs, unexciting scorestreaks and recycled weapons. By perfecting gameplay basics — which players should expect after so many years of practice and technological advancements — “Vanguard” can hone in on reinventing the experience with concepts, weapons and maps that fans have not seen before.

Reinvention, however, is difficult when a game takes place during an era that has been revisited over and over again in a variety of different games. “Medal of Honor” (1999), “Battlefield 1942” (2002), “Call of Duty: World at War” (2008) and “Battalion 1944” (2019) are only a handful of the many WWII-based first-person shooters in existence. To many longtime players of the “Call of Duty” series, this formula has become redundant. There are only so many times that Sledgehammer Games can reintroduce the MP-40 submachine gun with a new sound design, and there are only so many instances in which a gray house surrounded by rubble can serve as a map’s focal point before the games start to blend together.

At this point, the only real way to excite fans with yet another WWII game is to warp the war itself. When done responsibly, the distortion of historical details can serve a number of purposes, among them enhancing a player’s artistic experience. “Fallout 3” (2008) takes place in a post-apocalyptic world after WWII and explores the premise of a world where most technology is based on nuclear energy.

A purist could argue that changing details compromises the necessary grittiness of a video game set during WWII. However, some of the best “Call of Duty” installments have not been restricted by historical reality. The 2012 “Call of Duty” game “Black Ops II,” set in the near future, kept things fresh by introducing a summonable drone swarm and a rifle-like fictional submachine gun called the Peacekeeper. “Vanguard” stands to reap the benefits of this type of creative license. Rather than bringing back the trusty Kar98k sniper rifle, a laser rifle could take its place. Developers could even explore alternate histories, as long as the changes are clearly fictional and not revisionist: think more “what if Switzerland had joined the war” and less “actually, it was the United States that defeated the Nazis at Stalingrad.”

The key to maintaining an era’s atmosphere while still taking creative liberties is by rooting the game in reality. “Black Ops II” stays grounded by including weapons like the AN-94 and real-world locations like Kyrgyzstan. Similarly, “Vanguard” could hold on to aspects that define the time period in the WWII game canon: lower color saturation, relatively primitive technology and destroyed infrastructure.

The idea of subtle historical preservation amid larger anachronisms is not new to the “Call of Duty” series, either. “WWII,” for example, incorporated red dot sights, an alternative to weapon iron sights, despite the fact that they were not used in the 1940s. But the series is also known for more extreme alterations in history. Perhaps the most conspicuous example of extreme alteration is the addition of the Ray Gun in “World at War.” The science fiction-inspired weapon made its debut in the game’s Nazi Zombies mode and makes an otherworldly noise with each blast of green energy. The fictional weapon does not detract from the game’s WWII aesthetic but rather excites players when they obtain it — a rare feat in the game. “World at War” incorporates a fictional concept in a way that does not alter the anxiety-inducing survival aspect.

By incorporating anachronisms and historical alterations in “Vanguard,” Sledgehammer Games can push the boundaries of historical video games. Some may argue that accuracy determines a historical game’s quality, but this is not the case for “Vanguard.” In the realm of video games, the accuracy of historical details is only essential if the game is attempting to replicate a specific period or event. Beyond that, the game’s quality is impacted more by factors such as weapon balance, thrill and map design — all elements that can be both supported and enhanced with historical distortion.

A version of this piece appeared in the Monday, Sept. 20, 2021, e-print edition. Contact Brian Savino at [email protected]