Video game success is dependent upon numerous factors, and “Star Wars Battlefront II” delivers on all fronts — except gameplay balance. 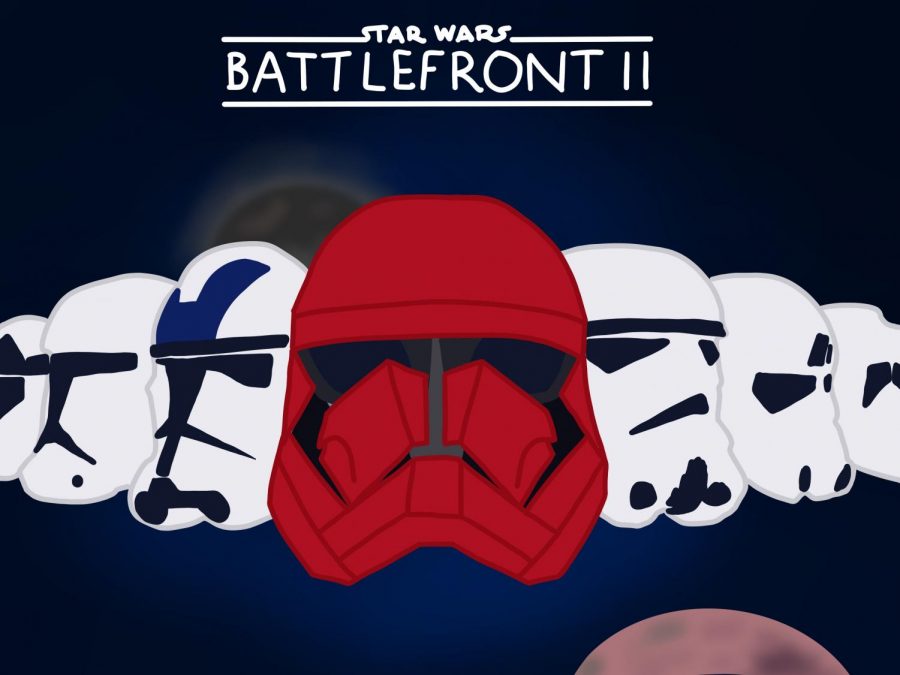 Video games depend on delivery on many different fronts. Stars Wars: Battlefront II is close to that but not quite. (Staff Photo by Manasa Gudavalli)

As the technology behind video games advances, developers are eager to incorporate the best graphics, audio and cosmetics into their games. But these aspects are not the only things that make a game enjoyable — rather, game mechanics and the freedom to choose from a large pool of balanced material allow a game to reach its full potential.

“Star Wars Battlefront II” is a shooter game released on Nov. 17, 2017 and developed by EA Digital Illusions CE AB. It is set throughout three Star Wars’ eras — the Age of Empire, Age of Rebellion and Age of Resistance — and includes a diverse set of characters and environments from the universe, including Yoda, General Grievous, Hoth and Tatoooine. Though over three years old, the game enjoyed heightened popularity in early 2021 before the developers ended ongoing game support to focus on their upcoming game, “Battlefield 2042.” Due to this burst of interest, EA should resume updating the game, as the lack of additions has left players unsatisfied — however, developers must address the gameplay balance issues in “Battlefront II,” including unfair characters and weaker roles that do not appeal to players.

In the game, officers, a default character option, stand almost no chance against special characters like the Jedi Rey or a heavily equipped Ovissian Gunner. Although many players can save up enough points to unlock a special character relatively quickly, new players have trouble acclimating to the game at first and may feel alienated by the constant barrage of lightsabers and special abilities afforded to higher-level players. Special characters should remain inherently better than infantry, but a small buff to default characters’ abilities, such as the Heavy Stormtrooper’s mobility or Specialist’s sniper rifle, would lead to more viable options to choose from and a better chance of survival for beginners.

Balance issues do not only present themselves between branches — they also exist within the reinforcement faction, a group of characters with higher competence than default options. During one “Star Wars” era, for example, the Empire offers the Death Trooper while the Rebel Alliance offers the Wookiee Warrior. The developers do not seem to share the love that “Star Wars” fans have for the Wookiee race. The Death Trooper’s E-11D rifle is precise and versatile, with the ability to boost its damage output without impeding movement speed. The Wookiee Warrior, on the other hand, uses a crossbow-esque Bowcaster that is only suited for close-range combat and features imprecise horizontal and vertical crosshairs.

Additionally, though the Wookiee Warrior has the ability to improve the Bowcaster’s damage output, it decreases the character’s movement by a staggering amount. This contrast puts the Death Trooper at an advantage in almost all situations. That’s not to say that reinforcements should be the same — a Wookiee should present the quirks that fans know and love, and a Death Trooper should retain its dark and demeaning nature. Rather, the Bowcaster should be altered slightly. Instead of only offering horizontal and vertical crosshairs, aiming in should allow for a more precise shot without having to completely sacrifice mobility.

The lack of proper balance is especially notable with heroes and villains, who possess the most power in the game. Top-tier characters, such as Luke Skywalker and Darth Maul, are nearly always present in a game of Heroes vs. Villains, while less-desirable ones, like Chewbacca, are a rare sight. The issue is not that the lower-tier characters are bad — rather, it is that these characters are usually best equipped for specific situations, while high-tier characters can be used in any setting. For example, Boba Fett, who is not always present in a match, is best used in an open area around which he can fly with his jetpack and confuse enemies. This is not possible on a confined indoor map like Jabba’s Palace, but Boba Fett shines on Bespin, which is full of open areas, sinkholes and bridges. To resolve this in a new release, the developers must make high-tier heroes and villains more situational. This can be achieved by tuning character abilities; for example, Kylo Ren’s force freeze ability, which paralyzes any enemies in reach, could operate in a smaller radius, or Anakin Skywalker’s force push ability could send enemies flying a shorter distance. By slightly adjusting these powers, developers can inch toward balance between these lopsided protagonists.

At best, the lack of gameplay balance in “Battlefront II” precludes a diverse battlefield. There is no reason to use Chewbacca over Han Solo unless players want to challenge themselves with Chewbacca’s limited arsenal. Although there can only be a certain number of reinforcement characters in battle at once, this is simply forcing a solution. Players generally do not wish to use a default Assault Trooper over a Jet Trooper, who is equipped with a high-powered weapon and jetpack. By giving less experienced players no option other than to forfeit these special characters to experienced players, the developers are actively pushing newer players away from the game. This leaves only experienced players who use a mere handful of classes. Ideally, there should be an approximately equal proportion of classes on the field, all being used by players who truly want to utilize them.

“Battlefront II” succeeds in offering stunning visuals, meticulous audio and action-packed gameplay. However, developers should bring back support to the game and place more emphasis on gameplay balance, with developers seeking to narrow the power gap between characters and increase class desirability.