‘Before Your Eyes’ encourages its players to be more present

“Before Your Eyes” uses our real-time blinks to control the outcome of its story. 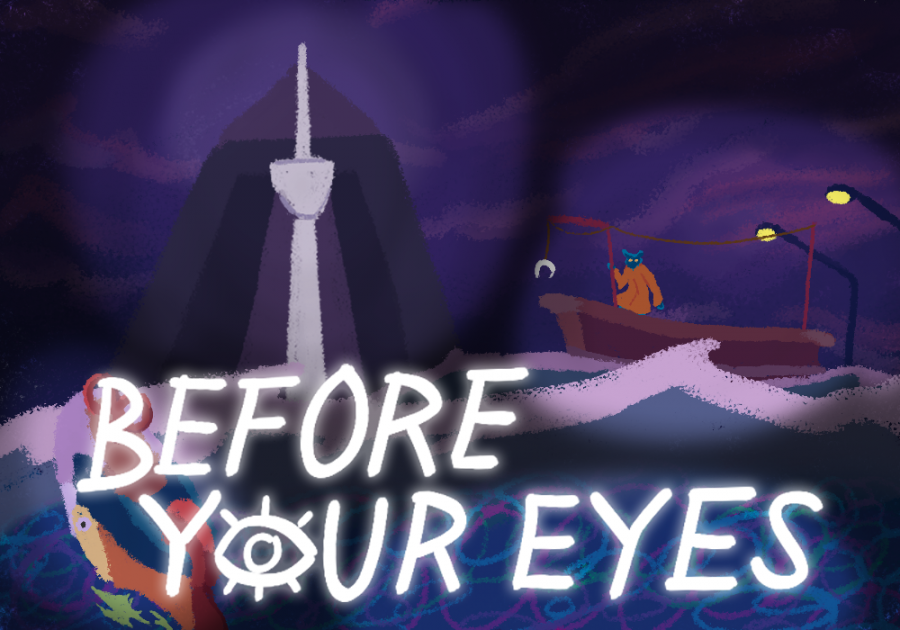 Before Your Eyes features a unique gameplay set in the afterlife guided by a ferryman. Players move through the story with blinking tracked by webcam. (Staff Illustration by Debbie Alalade)

I wouldn’t consider myself to be a gamer. In fact, I had not played an entire video game in years, before sitting down this week to play Will Hellwarth and Skybound Games’ newest creation, “Before Your Eyes”: a game that requires you to control the story with your real-time blinks via webcam. It not only refreshed my memory of how video games can be an exhilarating interactive medium, but also inspired me to view my life through a different lens.

The short 90-minute story immerses the player in the first-person point of view of the protagonist Benjamin Brynn, as he ventures through the afterlife with a mysterious wolf-like Ferryman (voiced by Stephen Friedrich). He prompts the player to venture back through Benjamin’s past by blinking through short snapshots. Through these snapshots, we find out why his life is important to the plot.

The game threw me into each moment with no information. We can only see small portions of each setting — the essential bits — as they are only a faint memory of Benjamin’s past. The sound resonates throughout the 3D environment, telling the player where to look and where to blink. At any given moment, a metronome will appear on the bottom of the screen, signaling that the next blink will begin a transition to the following snapshot.

At times, I didn’t want to blink. I wanted to live in the current moment. I wanted to listen to the dialogue and view the vibrant, colorful graphics around me. The theme of time in this game is both haunting and honest. At certain times, I would find myself accidentally blinking, worried that I may have missed something important to my story. However, the blinking mechanic is a reminder that time is uncontrollable, just like how we cannot control when we need to blink. The game forced me to stay present and grounded by keeping my eyes on the screen.

Toward the middle of the game, the narrative arrives at the end of Benjamin’s life, where it seems he has become a world-renowned painter. However, everything is suddenly thrown back to the boat with the Ferryman as he accuses the player of lying. He then prompts the player to revisit Benjamin’s past again, honestly this time.

In this truthful retrospective of Benjamin’s life, it is found out that he was diagnosed with a terminal illness at a young age. As I revisited the past this time, I noticed things that I hadn’t the first time. During these moments, the metronome would appear as an hourglass, which meant that I couldn’t blink until the time was up, forcing me to experience the situation on the screen.

This time, his recounting made me feel sad; the honesty was tough to endure but necessary. At times, there were moments that I didn’t want to relive. I desperately wished to blink to move to the next moment, but sometimes we are forced to live through dark and unsettling moments in life. They shape who we are, and they teach us more about ourselves.

Finally, the end of Benjamin’s life happens once again. It gradually becomes harder to move and look around. However, by closing his (my) eyes, the player can still listen to what is going on around them, picking up on conversations in a totally different room. The sound grows louder as Benjamin’s disease worsens. However, the finale is surprisingly quiet.

After many blinks, we reach the last moment of Benjamin’s life as his mother tells him the story of his 11-year-long life. She acknowledges that although his life was a short one, it was a valuable one as well. Because of his mother’s version of the story, Benjamin can accept the life that he lived and closes his eyes.

“Before Your Eyes” took me on an emotional journey. It seamlessly intertwined a simple but powerful story with innovative controls. Most importantly, though, it encouraged me to live more in the moment. It inspired me to cherish the sights and sounds around me. It inspired me to be more present.