The bittersweet joy of returning to ‘Animal Crossing: New Horizons’

One year after abandoning his village, Nathan returns to see how things have changed and reminisces on the joy “Animal Crossing: New Horizons” brought him during the pandemic. 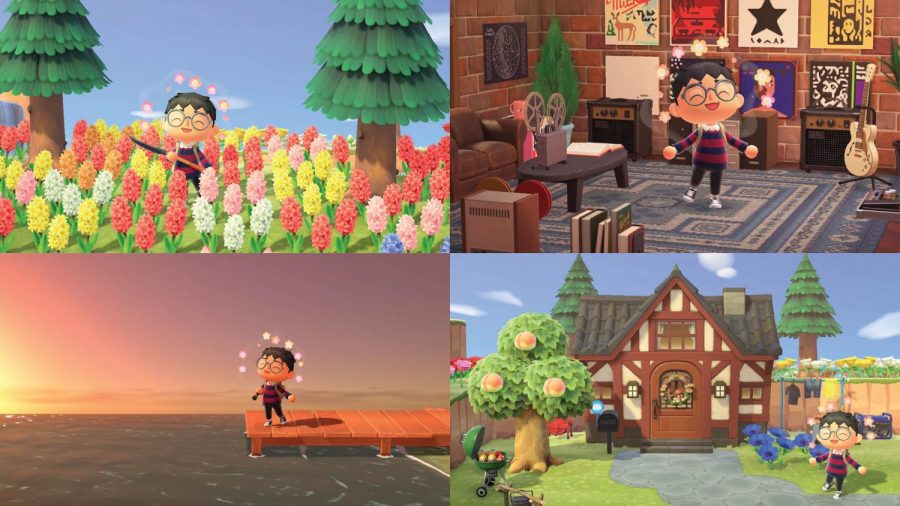 "Animal Crossing: New Horizons", released on March 20, 2020, is a life simulation game played in real-time on the Nintendo Switch. “New Horizons” provided its users a virtual safe haven during the first months of the pandemic. (Staff Photos by Nathan Chizen, Staff Illustration by Manasa Gudavalli)

After months of not even thinking about my island, Windsblow, I decided to return to my home in “Animal Crossing: New Horizons,” one year after its release date.

When the game came out on March 20, 2020, my excitement reached its peak. With the ennui of the lockdown setting in and the semester coming to an end, it was nice to have something to look forward to. I waited until midnight EST and downloaded the game the moment it came out. What ensued was the perfect escape from reality.

I remember going fishing with friends, gardening with my sister and even a couple of dates with people I met over Tinder who were living abroad. Every day, I’d wake up and check how things were going on my island. I’d do all the chores that needed to be done and then hang out with my animal neighbors, or spend my time perfecting the decor of my home.

In the real world, I would just wake up, go for a run, eat breakfast, do some work and then lounge around. “New Horizons” was the perfect antithesis to my living situation at the time. Instead of my 200-square-foot studio apartment, I had an entire island to roam around. With most of my friends having returned home, skateparks being closed and my favorite restaurants shut down, I felt as if all my agency had been stripped away almost overnight. I had no control anymore.

I think that’s what really gave me comfort in the early days of both the game and the pandemic: there was a place where I had complete control over everything. I could build my dream home, make an island paradise and see my friends almost any time. Even though so much of the fun derives from the game’s mundane content, there was a therapeutic aspect to it.

Almost a year later, when my villager stepped out of his home, his hair messed and matted as if he’d been sleeping, I felt a familiar sensation wash over me. Immediately, I went to check up on my neighbors.

“Nathan, where have you been?!” Shouted Deli, probably my favorite resident that I could remember. Although he’s a kindhearted monkey who happens to be a complete slob, the shock on his face felt genuine. There he was, still wearing the sweater vest I bought him a year ago. I made the rounds around each home, going to see whether my other villagers remembered me. Most remained on the island, but some were gone. Buck, a horse with incredibly large eyebrows and a passion for working out, had left. In his place was a dog named Lucky, wrapped in bandages, undeniably cuter than his predecessor.

With each villager shocked that I had made my return, a weird sense of guilt came over me. Even though they were just lines of code behind a screen, I had such a fondness for my villagers. I felt like I let them down in a way, but the shame soon gave way to the feelings of excitement and freedom I felt before. Suddenly, I imagined my old cramped apartment and the hope that “New Horizons” had given me. I remember looking out my window at Vancouver Island as I binged the game during its first week, with my escape on a screen in front of me.

Looking around at the weeds and flowers that had overrun my island, I felt like I had returned home after far too long. Everything was still in its place, exactly how I had laid it out twelve months ago. Without any conscious effort, I automatically went to do the chores that I once did a year ago. I combed the beach for shells, picked weeds and dug up the fossils scattered throughout Windsblow.

I soon discovered, however, that there was way more to do now since I missed the various updates in the past year. My museum had an art gallery with pieces to collect, there were new items to decorate my island with and my character was now able to swim. I wish I was more conscious of the new features that were added when they were released, but adding to the laundry list of daily chores in the game was still a delight.

When I returned to my character’s home, I took down the vinyl copy of Ariel Pink’s “Pom Pom” that I had made for my record wall and replaced it with a copy of David Bowie’s “Blackstar” that was parallel to it. I let the cockroaches do their own thing.

“New Horizons” was my haven during the first months of the pandemic. The calming soundscapes of my island and the unconditional love from my villagers gave me a sense of ease during a time of incredible uncertainty. When I returned to my island this year, those feelings flooded my mind once again.

I think I had lost the ability to relax and shut out my COVID-related anxieties when I left Windsblow. Playing “New Horizons” again really allowed for me to take a step back and appreciate the comfort that it radiates. As awkward as it was to get back into, the pure joy it exudes made my day. I think I’ll visit my island again soon. With updates that have brought a variety of new content to the game, I highly recommend that anyone who hasn’t touched “New Horizons” since the peak of its popularity to head back to see how their digital critters are doing.