The final season starts off slow, but promises to gain traction as the series comes to a close. 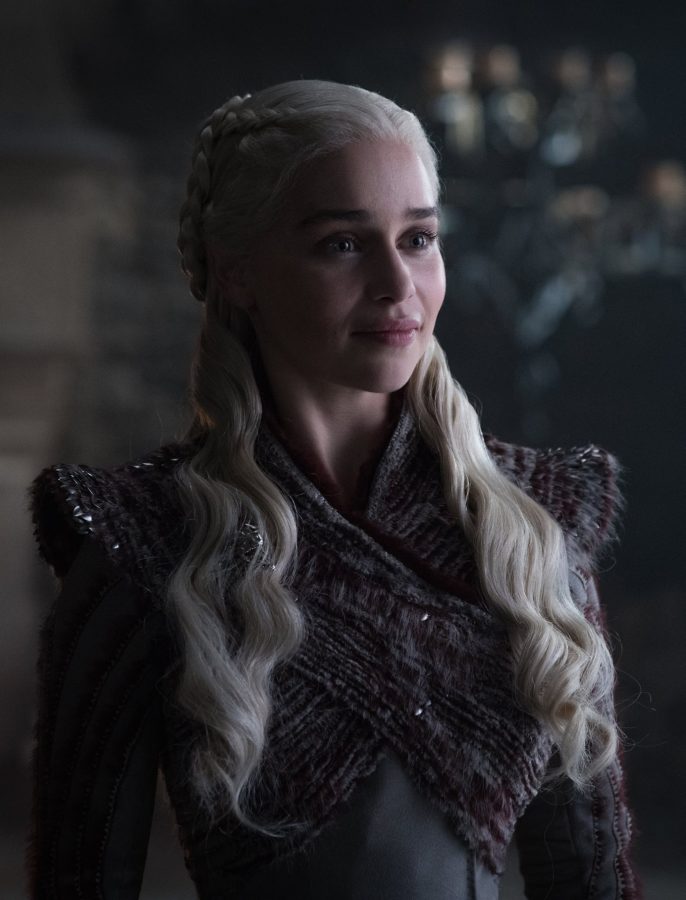 The following review contains spoilers of the April 14 episode of ‘‘Game of Thrones.”

Sunday night’s “Game of Thrones” episode marked the beginning of the end. The first episode of the final season is undoubtedly fun, featuring a minutes-long dragon ride, a long-overdue family reunion and a massive revelation. The premiere is chock-full of moments that viewers have been waiting for since the series’ inception. However, the episode also implies that the eighth season will be used mainly to pander to the show’s fans, as it’s filled with reunions of characters who have been separated for seasons on end, multiple dei ex machina and a script comprised almost entirely of pull quotes.

The seventh season ended with many loose ends left untied. To name a few, Arya (Maisie Williams) and Sansa Stark (Sophie Turner) joined forces to kill the manipulative Littlefinger (Aidan Gillen); Jaime (Nikolaj Coster-Waldau) and Cersei Lannister (Lena Headey) parted ways when the queen chose to fight against Daenerys Targaryen (Emilia Clarke) rather than the White Walkers; Jon Snow’s (Kit Harington) uncle Benjen Stark (Joseph Mawle) sacrificed himself to the White Walkers so Jon could live; the audience discovered that Jon is not only Daenerys’ nephew, but is also heir to the Iron Throne; and the Night King (Vladimir Furdik) and his army broke through the Wall and began to approach Westeros.

Since the seventh season ended in August 2017, fans have been waiting for the eighth season to either confirm or deny their theories. Some of these subplots are overtly addressed in the premiere: Jon learns of his heritage from Samwell Tarly (John Bradley), and the White Walkers murder Ned Umber (Harry Grasby) and display his body on the wall as a sign to the band of Northerners hunting them. However, many points are left unsettled: Jon arrives in Winterfell without a word of his uncle’s death, Jaime doesn’t appear onscreen until the last seconds of the episode and Littlefinger’s death isn’t mentioned at all, which is surprising considering that he was one of the few characters that maintained relationships with people from all Seven Kingdoms.

The initial scenes of the episode seem almost like the reboot of a late ’90s sitcom. When the camera pans to reveal a wide-eyed Arya watching Daenerys, Jon, Sandor Clegane (Rory McCann) and Gendry Waters (Joe Dempsie) march through Winterfell, the applause from the nonexistent live studio audience as they see their favorite characters reunite are nearly audible. When Tyrion Lannister (Peter Dinklage) and Lord Varys (Conleth Hill) sit in a stagecoach, cracking jokes about each others’ genitals, it seems as if the scene needs a laugh track. When Sansa and Daenerys first make eye contact, the tension between the two is jaw-dropping. The script seems artificial, as if the actors are performing lines that have been written for other characters on other shows.

“Game of Thrones” is a show about constant power shifts, and it seems that the upcoming season will play into this notion more than ever before as the series nears its end. In the season’s premiere alone, power shifts from one character to another 10 times. Each of these subtle subversions ostensibly sets the stage for another season-long subplot: Euron Greyjoy’s (Pilou Asbæk) knowledge of Cersei and Jaime’s affair has already begun to lead to blackmail; Jon’s new knowledge of his ancestry means that a Targaryen-Stark battle for the throne is almost inevitable; even a subtle weather change at the beginning of the title sequence suggests a dramatic reckoning as the North begins to freeze over due to the White Walkers’ imminent arrival. While it’s exciting to see these subplots set themselves up, the episode frequently lacks direction due to the constantly shifting focus.

George R. R. Martin, the author of the books “Game of Thrones” is based on, has an infamous affinity for red herrings, so his lack of involvement in the development of the eighth season is evident. The series used to be subtle and unpredictable, but this episode is anything but — each glance, snarky comment and seemingly chance encounter is blatantly intentional and meant to be interpreted that way. Maybe the showrunners are tricking fans and intentionally making the show look predictable just to sweep the rug out from under their feet at the last moment. For now, season eight looks to be predictable, incohesive and utterly out of character — but the dragon rides sure are exciting.