In a gothic retelling of Mary Shelley’s life, this production details the events that led up to the creation of “Frankenstein.” 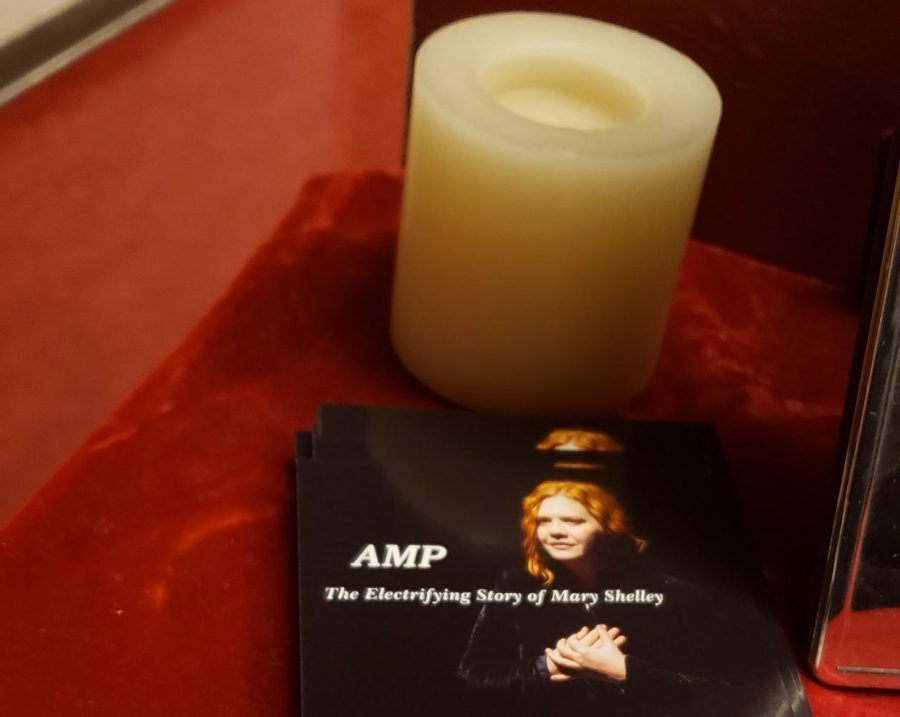 Inspired by its Gothic source material, AMP sets the scene with eerie candlelight. Styled as “The Electrifying Story of Mary Shelley,” the one-woman show spanned the author’s life. (Photo by Dani Herrera)

A small desk and chair sit in the corner of a dark, foggy room containing stacks of dusty books. The room sits in an unsettling silence as the lights dim. Suddenly, thunder strikes, lights flash and a woman rushes in, frantically scribbling on every flat surface available.

The child of the educated and reputable William Godwin and feminist activist Mary Wollstonecraft, Shelley was born in 1797. Her mother died shortly after her birth and her father remarried four years later. Her stepmother raised the young writer. Despite her stepmother’s discouragement of her education, Shelley had access to her father’s library, where she was exposed to the world of literature and science, specifically experiments with electricity and body parts. These topics lead to Shelley’s fascination with anatomy and the possibility of reanimation.

As she grew older, Shelley experienced waves of love and loss. Yet, the darkness in her heart couldn’t be shaken. This darkness remained hidden, until the fateful summer of 1816, when a friendly challenge led to the creation of Shelley’s most famous novel, “Frankenstein,” or “The Modern Prometheus.”

Mary Shelley’s “Frankenstein” may be a great horror story, but Christopherson’s writing focuses on the suspenseful life of the author leading up to “Frankenstein.” Through Shelley’s story, Christopherson dives into deeper topics, discussing women’s rights and the significance of scientific experimentation. These underlying themes are strategically scattered throughout the monologue, highlighting Shelley’s rebellious nature in response to a close-minded society and demonstrates how Shelley defied societal norms around the patriarchy and women in science.

As expected, the show was full of references to electricity, life, death and the human body. Though subtle, the constant return to these hints at Shelley’s growing fascination with the crossover between humanity and monsters.

The intimate space of the theater combined with dramatic lighting and a misty fog created an air of mystery. Sudden bursts of light and rolling thunder shocked the audience, as Christopherson embodied Shelley’s increasing insanity. Christopherson’s own sharp movements and use of the space demanded attention as she narrated with a frenzied look in her eyes.

She never once lost the audience’s attention as her tone and her body language helped to guide the story.

The performance had the audience watching in silent anticipation, unsure of what would happen next. Would the lights go off? Would the music rise? Would there be an ear-piercing scream? The acting and special effects accented the monologue, though not in the way one would expect. Christopherson, along with the directors and producers, effectively engaged the audience with a few props, some special effects and a fantastic script. In a noteworthy performance, the production managed to tell the story that led to the creation of one of the most widely-recognized novels in the world.

At the end of the show, Christopherson thanked the audience for taking a chance on bizarre theater. While the show closed Feb. 22, the show will tour around the country, including the Water Tower Theatre in Texas from Oct. 22-25. Its content is captivating, unsettling and full of raw emotion, justifying the $18 dollar ticket price. “AMP: The Electrifying Story of Mary Shelley” is an intensely chilling work that tells a more personal, lesser-known story.

A version of this article appears in the Monday, Feb. 24, 2020, print edition. Email Dani Herrera at [email protected]