Here’s Why Scripts Deserve as Big of Spotlight as Books

Poems and prose are conventional materials for reading while plays are wrongfully excluded despite their many admirable qualities. 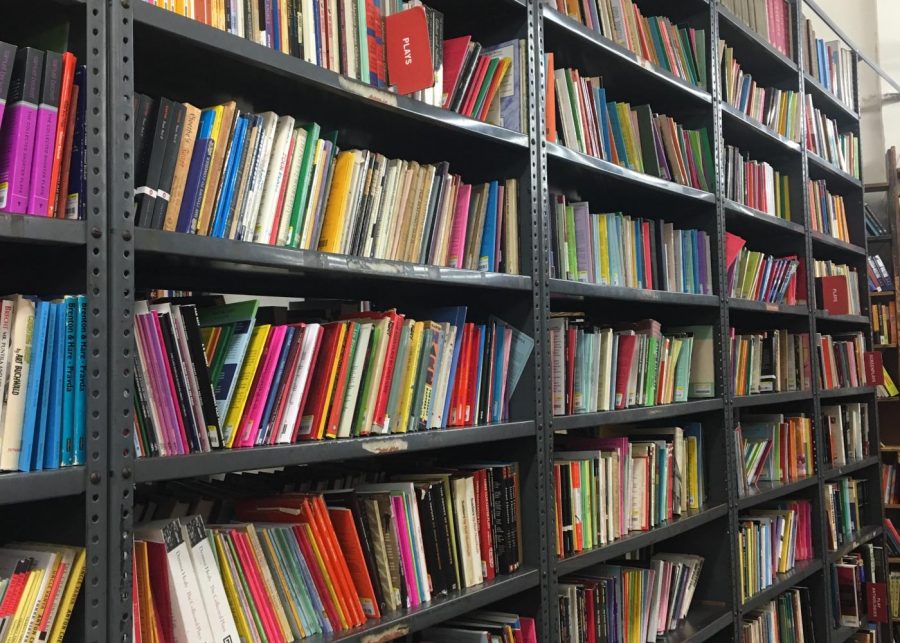 At Strand Bookstore, books of scripts line the shelves. Reading the script or screenplay of a production can give audience members a different perspective on the play than just viewing it in theaters. (Staff Photo by Sasha Cohen)

Who decided that books and poetry are mainstream? Seriously, I want to know who. Ever since we were young, teachers continuously shove these resources in our hands as if they are the only options. As a result, names like Jhumpa Lahiri, Langston Hughes and Charles Dickens often fill classroom discussions while autobiographies and novels line our bookshelves. Yet who decided that prose or poetry should be the only conventional forms of reading? While these options are fantastic, I feel as if we are neglecting the opportunity to indulge in a play. I do not mean attending a Broadway show or watching musical adaptation on the television, but reading the actual script. Even though the thought of reading a script may rekindle nightmares from our high school Shakespeare days, there is much more to the dramatic cannon than just that sonnet-loving playwright.

A play can open our eyes to a new form of storytelling. I would describe reading prose as two-dimensional due to its composition consisting of mostly narration with occasional dialogue. Scripts, on the other hand, are comprised of more frequent dialogue and stage directions which creates a three-dimensional experience. In plays, each direction vividly depicts the setting while movements and delivery are specified to control the intended delivery. The script also includes lighting and set designs, prop descriptions and costumes that typically model the original production. Additionally, character development evolves through personal dialogue, revealing the character’s genuine objectives as opposed to a narrator sharing their opinion about others.

Many of us think that plays have to be overdramatic in order to be theatrical. In other words, characters have to sob their eyes out, profess their undying love for another or end their lives, thereby ending their eternal misery. However, this association could not be further from the truth. Just like literature, scripts offer a wide variety of genres and perspectives. From gut-wrenching dramas to satirical comedies like “A Raisin in the Sun” by Lorraine Hansberry or “The Government Inspector” by Nikolai Gogol, there is a show for even the most play-despising individual.

When screenplays or scripts are brought to life in a production, there are myriad distractions that could potentially pull focus from the writing: the acting, set or even the person sitting next to us who has a horrendous cough. Reading a play allows people to obtain a closer look at the actual writing. Sometimes, a few jokes are not delivered quite right in a production or dialogue’s subtle hints are hard to catch after the first read, but having a copy of a script grants us the chance to revisit sections and search for nuances. A second read may even change personal opinions regarding favorite characters and their characterizations. Regardless of the motivation, reading a script allows someone to explore the dramatic world as much as they feel they need to maximize the experience.

Books, poetry and prose all offer specific benefits, but it is important to also keep dramatic literature in mind. The art form provides an opportunity to explore shows from the past and experience the story from the comfort of a home instead of a theater. So next time we are indecisive at a local bookstore, make sure to check out the shelves stuffed with plays. There are many gems, aside from Shakespeare, that are waiting to be discovered.

A version of this article appears in the Monday, Feb. 3, 2020, print edition. Email Sasha Cohen at [email protected]